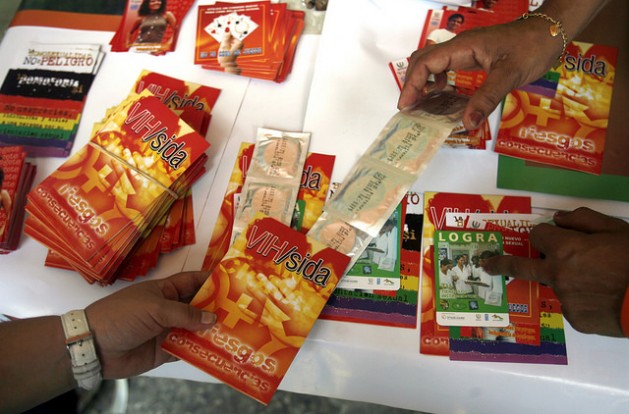 Pamphlets and condoms handed out by Cuba’s National Centre for Sex Education as part of its awareness-raising efforts. Credit: Jorge Luis Baños/IPS

HAVANA, May 7 2014 (IPS) - All illusions of love, trust and dedication to a relationship flew out the window for Mayda Torres in 1992, when she found out she was HIV-positive while undergoing routine exams to start a new job.

“I had a stable relationship. I wasn’t unfaithful. And I hadn’t ever had a sexually transmitted infection [STI],” the 49-year-old resident of the Cuban capital told IPS.

“When I got to the hospital [of Santiago de las Vegas, in Havana], I was shocked to see my husband there. He was HIV-positive and he never told me,” said Torres, who is now a sexual health outreach worker.

“Women must be told about condoms and STIs, but also about how to set romanticism aside and put the cards on the table with their partners,” she said. “Today no one can be sure about anything,” lamented Torres, a survivor of a time when treatment against HIV was not available in Cuba.

Although the number of Cubans living with HIV has grown in recent years, this Caribbean island nation of 11.2 million people has one of the lowest HIV prevalence rates in the world – just 0.1 cases per 100 adults in 2005, according to UNAIDS.

Last year, women accounted for 18.5 percent of the 2,156 new cases detected, which brought the total to more than 16,400 HIV-positive people.

Nancy Mora, a member of the national coordinating team of the AIDS Prevention Group (GPSIDA), a national network of volunteer outreach workers, confirmed to IPS that the number of women living with HIV is on the rise in Cuba.

There is concern that the epidemic will increasingly take on a female face, like it has in the rest of the Caribbean region, where women are 53 percent of the HIV-seropositive adult population.

According to U.N. Women, over 60 percent of young people and 54 percent of adults living with HIV worldwide were women in 2013. The highest proportion was in Sub-Saharan Africa, where women represent 72 percent of HIV-positive adults.

In Cuba, the HIV/AIDS epidemic has behaved differently.

Since records began to be kept in 1986, most cases of HIV/AIDS were among the 15 to 49-year-old age group, and largely among men who have sex with men, who make up more than 70 percent of all cases in Cuba, where 99 percent of cases were sexually transmitted.

Mother-to-child transmission as well as transmission through blood and blood products have been virtually eliminated in this socialist nation. Treatment for HIV/AIDS is free of charge, as is all health care in Cuba.

However, the number of people living with HIV is growing slowly but steadily, and women, young people and even the elderly are among the vulnerable groups, requiring more specific prevention strategies.

Mora, who is also a nurse, told IPS that “the reported increase among the female population has to be looked at more closely, with a gender focus.

“We have a very sexist culture, where women tend to subordinate themselves to some extent in their relationships,” she said, while walking briskly between the beds of patients in the Santiago de las Vegas hospital.

The hospital, which operates in an old manor house on the outskirts of Havana, was the first to treat HIV/AIDS patients, becoming a reference centre for people living with the disease. Within its walls it encapsulates the history of AIDS in this country.

Mora said “we have worried so much about making sure women are in management-level posts and are integrated in public life. However, there is little talk about the importance of women taking charge of their own bodies, sexuality and relationships.”

In Cuba, women earn the same as men, have a right to safe, free abortion on demand – an exception in Latin America – and account for 64 percent of university graduates.

But machismo persists. Housework and the care of children, the ill and the elderly fall squarely on the shoulders of women, who are still also treated as sex objects.

“If women ask their husbands to use a condom they can be criticised, even accused of infidelity,” Mora said.

She said that people don’t generally understand that women are especially vulnerable to being infected with HIV, even in stable relationships. “Men are allowed and even raised to be unfaithful and promiscuous. If they have lovers, they are seen as a success,” she said.

The story of Roxana Echenique, a schoolteacher who found out in 2001 that she was HIV-positive, is an example of another – controversial – hidden face of the epidemic.

“My partner infected me. My first question was whether he had had sex with men, but he denied it,” the 43-year-old resident of Havana, which has the highest HIV rate in the country, told IPS. “I later found out he was bisexual. I felt absolutely furious,” said Echenique, a mother of two.

She stressed the damage caused by the prejudices and myths about women with HIV/AIDS. For example, “there’s an idea that it only happens to prostitutes and promiscuous women,” she said.

A study carried out in 2012 and 2013 among 30 homemakers in the working-class Havana neighbourhood of Luyanó found a low level of awareness of the risk of being infected with HIV and of the vulnerability faced by women. In addition, not all of them could identify safe sex as a method of prevention.

“I advise all women to use condoms…this disease is very hard, and even more so for women,” said Echenique, who still remembers the pain of being separated from her children when they were young and she was living in the Havana sanatorium.