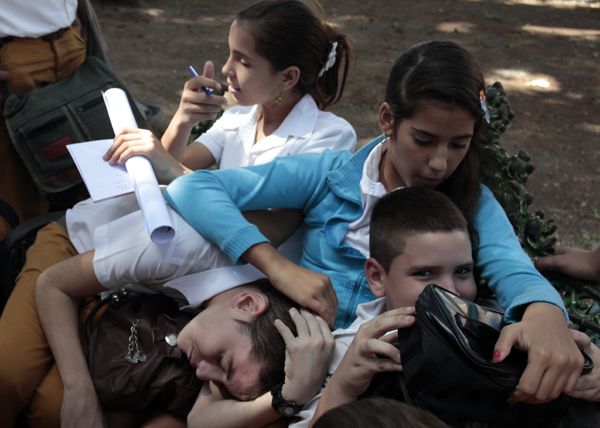 According to a survey, one-third of Cubans between the ages of 12 and 49 believe they have little to no chance of getting AIDS. Credit: Jorge Luis Baños/IPS

HAVANA, May 9 2013 (IPS) - “But I always used a condom!” was the sentence that played over and over in Jaime Roche’s mind when the young Cuban man tested positive for HIV in October.

“I couldn’t believe it. I’m an advocate of using condoms, even for oral sex,” the health worker, who preferred not to give his real name, told IPS. “This happened to me by accident: the condom broke during a casual encounter,” Roche said.

“Maybe I would have been protected if I hadn’t been with another person outside my stable relationship. That might be the ideal thing for total security,” said Roche, who is also a social activist. “My partner of 10 years is still with me. For now, I apparently haven’t infected him, although he has to get tested again.”

Young people, especially men who have sex with men (MSM), make up the majority of new HIV and AIDS cases detected in Cuba every year, even though young people use condoms more when engaging in sexual relations, according to recent studies.

A 2011 survey on prevention indicators for HIV infection conducted by the National Office of Statistics and Information (ONEI) found that 59.6 percent of MSM, 62.9 percent of other men, and 65.9 percent of women under the age of 20 practiced safe sex in their first sexual encounter – a rising indicator.

As of late last year, a little over 13,000 of Cuba’s 11.2 million people were HIV-positive. Of those individuals, 29.6 percent were 15 to 29 years old in 2011, when the ONEI conducted its most recent survey of people living with HIV/AIDS.

Meanwhile, the 15-19 year age group accounted for the largest number of new cases detected in 2012, unlike in previous years, said Dr. Jaqueline Sánchez, coordinator of the Line for Adolescents and Young People of the state-run National Centre for the Prevention of STDs (sexually-transmitted diseases) and HIV/AIDS.

For that reason, Sánchez said in a conversation with IPS, more needs to be known about this group, and comprehensive work needs to be done to foment “protective factors” – that is, behaviour, situations, environments and attitudes that will keep this population group away from the epidemic and other STDs.

Communication in the family and with one’s partner; positive relationships with parents, teachers and other adults in the community; social policies for comprehensive services for adolescents; a participatory environment free of violence and discrimination; and access to sex education from an early age are all elements that protect against the spread of HIV.

“Condom use is not enough to stop the epidemic,” said Sánchez.

Young people, defined by the experts in Cuba as the 15-30 age group, are considered to be at high risk for HIV-AIDS all over the world, to the extent that about five million people in that age group are now living with the disease, according to the United Nations.

Drug and alcohol use, dropping out of school, unequal opportunities, unsafe environments, ignorance about sexuality, and under-use of health services are all risk factors for this age group around the world.

It is also typical during this period of life to change partners and depend more on one’s friends, often ignoring the advice of close adults and engaging in risky behaviour.

Studies show that today’s generations are assuming sexuality more freely, and that they often view casual and open relationships and even group sex as something natural.

The prevalence of HIV/AIDS in Cuba since the first case was detected in 1986 has been concentrated among young people aged 20-29. That increases possibilities for contact with the virus in this group, making it epidemiologically vulnerable, Sánchez said.
“Young people are the most likely to follow safer sexual behaviour if they receive guidance from an early age,” she said. “But that will depend in great measure on adults providing them with increasingly friendly information, knowledge, and services as a normal, healthy part of growing up.”

In a post on the Café 108 webpage of the IPS Bureau in Cuba, biologist Isbel Díaz said prevention campaigns should “shake people up a bit, even at the risk of shocking them a little.” He added, “We cannot let our young people be exposed simply because we are worried about looking like we’re exaggerating, or about shocking people when talking about the disease.”

Other health promoters, such as Liana Trelles, who teaches English at the Saúl Delgado high school in Havana, advocates empathy with teens and young people. “I started out by observing them, asking them what their concerns were, and addressing them directly,” she told IPS.

Trelles, who is also a psychologist, and other teachers at her school created spaces for conversing about these issues with students 15 to 18 years old. “I was alarmed when I heard about the ‘descarga,’ a type of relationship that may or may not reach sex, and where there is no commitment or stability,” she said.

“Practices of that type also make a group vulnerable,” she said, noting that studies are needed about that behaviour to understand how widespread it really is. Therefore, she said, she promotes protective factors, such as “increasing knowledge about condom use and responsible behaviour.”

The HIV/AIDS rate in Cuba is just 0.19 percent of people aged 15 to 49. But since the start, it has slowly but steadily grown. It mostly affects men, especially MSM, but since 2004 the figures have risen for women, especially young women.