HAVANA, Apr 20 2011 (IPS) - While gender roles have changed since Cuba’s 1959 revolution, inequalities persist among men and women in private life, and young people are both accepting that and breaking with it. 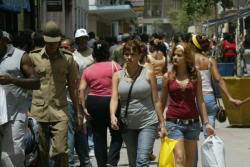 “The more private a relationship is, the more blurred gender equality becomes,” Natividad Guerrero, director of the Centre for the Study of Youth (CESJ), told IPS. “Women continue to be at a disadvantage, although the state and citizens are interested” in changing the situation.

The burden of the household falls on its female members, Guerrero deplores. Worldwide, women devote at least twice as much time as their partners to domestic chores, according to the United Nations report “The World’s Women 2010: Trends and Statistics”.

Having inherited women’s emancipation as part of the Cuban Revolution, some of today’s young people nonetheless had a sexist upbringing. The reproduction of female and male roles may be seen in many situations, adds Ana Isabel Peñate, also a researcher with the CESJ.

Nevertheless, the youngest generations perceive as natural the changes to gender roles, in terms of women as workers and students. When asked, they also admit that males should share in domestic chores.

Ray Denis Matamoros runs the house: he is comfortable in the kitchen and knows how to clean and iron. Participating in household chores has been part of his routine since adolescence. However, “a man should never let a woman disrespect him or try to show you that you are weak,” he asserted in a conversation with IPS.

Despite the relaxed tone of his voice, this 26-year-old longshoreman has an unwavering principle: “The woman who is with me has to work. Nowadays they can all do what they want.”

In 2009, Cuban women between the ages of 15 and 24 had a 36 percent participation rate in the national economy, according to the National Office of Statistics (ONE) publication, Mujeres y Hombres en Cuba (Women and Men in Cuba).

At the same time, education has a female face. According to the same report, during the 2009-2010 school year women comprised 57.3 percent of pre-university students, 37.2 percent of technical/professional students, and 61.3 percent of university enrolment.

In fact, more women than men earn higher education degrees in Cuba, a tendency that began in the 1980s and became stronger in the past decade, according to specialised sources. At the end of the 2008-2009 school year women made up 59.8 percent of university graduates in the country, according to the ONE.

However, women tend to shoulder the burden of child raising and caring for the elderly alone, at the cost of dropping out of the workforce. For the last two years, Lorena Tápanes limits herself to domestic chores. Since the birth of her son, this 23-year-old woman left her job as an accountant in a business district of the capital.

Her time is spent in running after the toddler and her world is basically limited to her neighbourhood. She is longing to return to work. “I miss the independence of having my own money,” the young woman said. She had to stay home to take care of the baby, so that the family budget was less affected.

Young women in this Caribbean island nation are the daughters of the generations that led women’s emancipation after the 1959 revolution. However, the economic crisis of the 1990s plunged Cuban society into questions of day-to-day survival.

Although it is not universal, “a process is underway of opposition to the model represented by the mothers of today’s young women,” sociologist María Isabel Domínguez told IPS. They see the previous generation of women as “very liberated and independent, but slaves to everything and everyone, in the end,” she says.

Domínguez highlights this “polarisation” among Cuban girls today. “There is one group of women with high levels of education and another group of young women who completed their secondary school education and do not work,” she explains. The latter aspire “to be housewives, married to a ‘good catch’,” she says.

In contrast, the first group fights to have relationships based on equality, to postpone the start of life as part of a couple and put off motherhood, questioning in defiance the social value assigned to “being a mother,” according to Domínguez, the director of the Centre for Psychological and Sociological Research (CIPS).

Adriana de la Nuez pursues goals similar to those her mother sought after when she was her age: to be an independent and active person. She works and also studies at the University College of San Geronimo de La Habana. She longs for a partner with whom she can grow as a person: he must not smother her, or be her everything.

“In the relationships I have had, I shared everything with my partner,” she says, referring to household chores. But those experiences occurred when both she and her partners were students. It might be very different, she says, when one or both are working and bringing home wages.

Men have not fully been behind “the accelerated and intense cultural change” in the roles played by Cuban women, and that has had costs for family stability. “Men have had to admit that the process has been a necessary evil,” Domínguez comments.

“They have no choice but to accept losing ground, but they don’t give it up voluntarily,” she says.