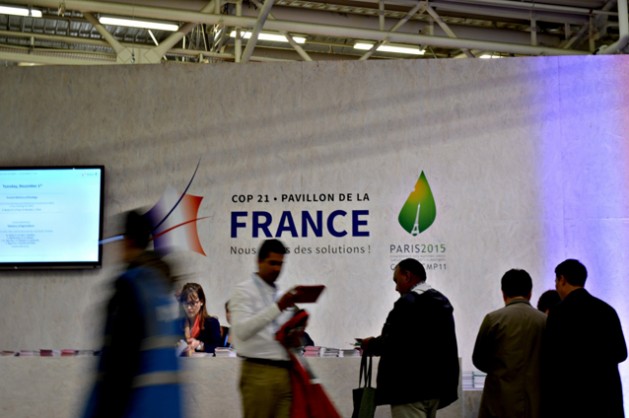 The 2015 Climate Conference is hosted by France, who also serves as its President. The French has been eager to conclude the talks with an agreement, thus pushing countries to a fast-paced first week. Credit: Diego Arguedas Ortiz/IPS

PARIS, France, Dec 7 2015 (IPS) - Whatever effort there was made during the past four years to create a global legal architecture to combat climate change, its legacy will be defined in the forthcoming days.

Negotiators from 195 countries walked into the second and final week of the climate negotiations here in Paris on Monday after producing the final draft version of the expected global agreement last Saturday. This has a cleaner look than those preceding it but still major international policy issues lie unresolved.

“We could have been better, we could have been worse, the important thing is that we have a text, that we want an agreement next week and all parties want it,” said French Ambassador for the International Climate Negotiations Laurence Tubiana as talks closed last week.

It’s up now to ministers to continue the technical discussions delegates had during the first segment of the talks but with a politically nuanced view as countries should agree to complex economic and development meeting points to address climate change.

If the accord comes through, the world should break apart from its fossil fuel dependence and quickly move towards a low-carbon economy with more resilient cities, communities and businesses, in what accounts to a complete divorce from the 20th century development model.

For this to happen though, parties must agree to heavy cuts in greenhouse gas emissions and financial support to comply with inversion in cleaner energy and adaptation to climate impacts.

The relatively fast-paced 2015 Climate Conference (COP21) is still on schedule with the expectations of its host, the French government. According to their proposed agenda, the talks will deliver a final text by Wednesday night this week so that translators and legal advisors can prepare an official document in all UN languages. But that’s still several days away.

“The job is not done, we need to apply all intelligence, energy, and willingness to compromise and all efforts to come to agreement. Nothing is decided until everything is decided,” said Tubiana.

How the French Presidency and the facilitators it has appointed handle these upcoming days decides the fate of the agreement, which could provide a global treaty on emissions reduction or another failure like the 2009 conference at Copenhagen.

“We have advanced at the pace the French presidency wanted. There is a negotiating text for this week, but it’s not as clean as we would have liked”, Dennis Castellanos, head of the Guatemalan delegation, told IPS. “The work we have for this week is still pretty significan.t”

Guatemala currently presides over AILAC, the Latin American and Caribbean Independent Alliance, which groups eight developing countries from the region with a progressive stance and is seen as a bridging group between developing nations and the industrialized countries.

“As always, finance would be another of the key issues we would need to address,” Castellanos explained.

The financial support from developed countries, and more unusually as South-South cooperation, will determine the quality of the agreement and the tools countries will have to implement, measure, and verify their current commitments. This remains one of the cloudiest topics of the talks.

The pressure for delegates is double: they not only have the mandate to produce a globally binding agreement after the two-week long Paris talks, but it needs to be as ambitious as possible to create a longstanding solution to climate change.

The latest review of the current pledges show global warming was curved down, but still not enough as to prevent catastrophic impacts around the globe.

“The ministers have a choice: either they meaningfully address the inadequacy of current climate targets, or they make a deal that puts the world on a path to catastrophic three degrees of warming,” said Wendel Trio, Director of Climate Action Network Europe in a press release.

A key issue still undecided is what should be the limit of the temperature increase, a target set in two degrees Celsius after a political debate in the Copenhagen talks but hotly debated over the past years as still too dangerous.

The 2013-2015 review, a scientific analysis of existing literature made by a subsidiary body of the Climate Convention, concluded among other elements that 2 degrees would be catastrophic for lowland regions around the world, especially the atoll nations of the world.

The scientific body submitted a three-year long scientific review which may have convinced nations that a 1.5 Celsius target was possible, but strong opposition by an oil-rich country made it miss the last chance to be approved before the final week of talks.

As over 100 countries among the least developed and most vulnerable, along with some key players like France and Germany, push for this more ambitious target needing a faster transition to renewable energy but could in turn trigger increased actions for the private sector.

“Paris needs to send a signal that the era of fossil fuels is coming to an end, so that businesses can plan for a carbon-free future. So the language in the Agreement needs to be clear,” argued Martin Kaiser, Head of International Climate Politics at Greenpeace.

As delegates are aware now that the current voluntary pledges made by countries won’t be sufficient to comb down the planet’s temperature increase to safe levels, Kaiser said “The Agreement then needs to provide the means for getting there. That’s the mechanism to scale up ambition every five years.”

This mechanism, also called the Paris Ambition Mechanism among the hopeful who push for it, would institute mandatory and periodical reviews for country’s commitments where they can be scaled up to further reduce emissions. This would be completed by a global analysis of how much can be achieved globally.

However, Kaiser stated, the first review should be before 2020 and not to “wait for the first review or stock-take to happen in 2024 or 2025, because that will set in stone the current pledges.”

So begins the last week ever of the road to a Paris Agreement, which would enshrine the process as a masterful year-long successful effort to combat climate change is down to a handful of days.or another step humanity takes into the war against itself.