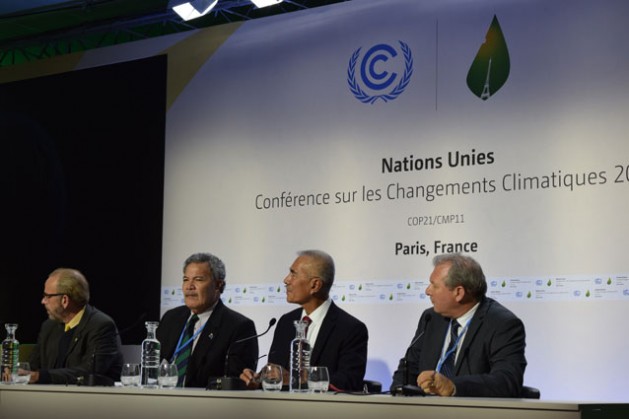 PARIS, Dec 10 2015 (IPS) - On World Human Rights Day (December 10) at the UN climate conference in Paris, small island nations from the Pacific made a passionate call to the world leaders: stop climate change and honour our right to exist on the earth.

“We have been singing the same song for so many years: reduce carbon emission and global warming, because it threatens our existence,” said Enele Sosele Sopoaga, the prime minister of Tuvalu.

With a population of only 10,000 and land area of 26 square kilometers, Tuvalu is a tiny dot of a country in the Pacific Ocean. It is also one of the most climate-vulnerable countries, facing severe risks of sea level rise, ocean acidification, and increases in extreme weather. In 2014-15 alone the country was hit by 18 cyclones, including Cyclone Pam, which killed 16 people and caused damages worth 250 million dollars.

At the COP21, where the negotiation for a climate agreement is gaining momentum by the hour, the prime minister says that for his nation, climate change means a direct, existential threat. Sopoaga thinks a climate agreement in Paris that does not keep the global emissions below 1.5 degree Celsius and is weak on financial commitments would mean denial of his country’s right to exist.

“You have a right to live and so do we. So, to all the leaders I urge, ‘keep your commitment to a strong deal. Don’t blink now,’” he said.

The draft agreement, which is current being negotiated at Paris climate change conference, talks about vulnerable people like citizens of Tuvalu.

“Emphasizing the importance of Parties promoting, protecting and respecting all human rights,” reads the draft, “the right to health, and the rights of indigenous peoples, migrants, children, persons with disabilities and people in vulnerable situations and under occupation, and the right to development, in accordance with their obligations, as well as promoting gender equality and the empowerment of women, when taking action to address climate change.”

However, the entire paragraph is “within brackets.” This means it is open to debate and changes, including rephrasing and even deletion from the final agreement.

The vulnerable island countries are worried that when the final draft is produced, their rights may not be recognized.

“So far, I feel confident and energized with the way the negotiation has progressed. I hope this initiative (to include human rights and vulnerable people in the climate agreement), will continue,” says Anote Tong, president of Kiribati.

Located north of Tuvalu in the Pacific, Kiribati is another vulnerable country that has been looking to buy land in other countries to move part of its population who face total submergence as global warming increases and the sea level rises.

The total land area of the country is 811 square kilometers and the average elevation is less than two meters above sea level. The sea is rising at a rate of about 0.12 inches (3.1 millimeters) per year. So, besides erosion, sea-level rise, and contamination of freshwater by growing salinity, Kiribati also faces total submerge.

In fact, some of Kiribati’s 32 flat coral atolls – ring shaped islands made of coral reef – are already disappearing. So, while the main focus of the negotiators at the Paris climate conference is on areas like carbon emission and finance mechanisms, for his country, it is a question of whether they will survive as a nation, says Tong.

On Human Rights Day, the president of Kiribati thanked Fiji for offering to relocate 100,000 of his people, which will help them escape being drowned by the sea level rise. The relocation will be done over several years and the land required for that will be legally sold to Kiribati.

But, it is the COP21 where the real action can take place, says Tong.

“There are lots of works that need to be done,” says Tong. “The large countries still don’t get that it’s a matter of human survival for us. But they will have to come along,” says Tong.

One of the major disappointing outcomes of the climate conference so far has been the language of the draft on loss and damage, which is also in brackets (implying there is no consensus and convergence among parties to reach a compromise). There is no mention of liability and compensation by the developed countries towards others. And the most vulnerable countries, who never caused any global warming, are concerned that the agreement will not include a compensation scheme to help their citizens cope.

Experts are commenting that if the Paris conference finally passes an agreement that does not include liability and compensation, it could force some countries to use other means of seeking compensation, such as legal action against polluting corporations for the damages that have caused the damage they are having to endure.

“I have a feeling that it will happen. It maybe not bring a concrete result, but it will have a symbolic move of action for others. It is important to see that happening. At least start a conversation around it,” says Andrew Gage, a lawyer in West Coast Environmental Law, a Canadian-based organization that provides legal support to all those who protect and sustain the environment.

On Wednesday at the COP, Gage released the report Taking Climate Justice into our Own Hands, which he co-authored and which highlights the power of climate-impacted countries to decide legal action against climate polluters such as large-scale fossil fuel producers.

This report makes this legal argument for the first time which any country can try. It also proposes text for a model “Climate Compensation Act.”

Koomi Naidu, global head of Greenpeace, is also of the opinion that litigation will emerge as a more common tool for climate justice in the vulnerable countries in the future. It is already happening in the Philippines, says Naidu, where a number of organizations have joined hands

But when asked about this, the prime minister of Tuvalu said that litigation is not an option for his country: “No, Tuvalu will never do that. We will just sing the song louder,” he said.

Ioana Tupai, a local journalist from a village called Se’esee in the Upolu island of Samoa, agrees with Sopoaga: “I do hope there will be a binding agreement that will keep the emission below 1.5. If there is no agreement, then what’s the use of money for adaptation or mitigation?” she asked.