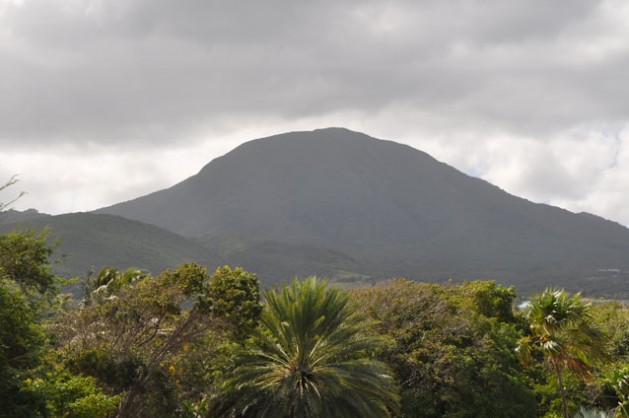 Mount Nevis sits at the centre of the volcanic island of Nevis, which has reserves of geothermal energy. Nevis is the smaller island of the pair, known as the Federation of St. Kitts and Nevis. Credit: Desmond Brown/IPS

CHARLESTOWN, St. Kitts and Nevis, Jan 25 2016 (IPS) - Legislators on the tiny volcanic island of Nevis in the northern region of the Lesser Antilles say they are on a path to going completely green and have now set a date when they will replace diesel-fired electrical generation with 100 per cent renewable energy.

The island, with a population of 12,000 currently imports 4.2 million gallons of diesel fuel annually, at a cost of 12 million dollars, a bill it hopes to cut down significantly. Nevis consumes a maximum of 10 mw of energy annually.

Deputy Premier and Minister of Tourism of Nevis, and Minister of Foreign Affairs of St. Kitts and Nevis Mark Brantley said geothermal energy is something that sets Nevis apart. 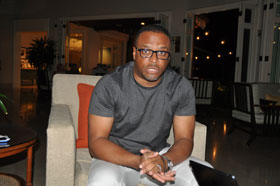 “About 10 years ago we discovered that we have geothermal energy here. It has taken a while but we are not at a stage where all the exploration work has been done and we have been assured that geothermal goes live in December of 2017,” Brantley told IPS.

Nevis is the smaller island of the pair, known as the Federation of St. Kitts and Nevis. It is home to active hot springs and a large geothermal reservoir. Seven volcanic centres have been identified on Nevis and drilling at three sites has indicated that the geothermal reservoir is capable of producing up to 500 mw of constant base load power year round.

Brantley said the shift to geothermal could not have come at a better time.

“We’ve just come out of Paris with COP21; the world is talking about climate change and what we can do. I think it really gives Nevis another string to its bow in terms of things that we can talk about and exciting developments here that would drive traffic to the island as people come and would want to be a part of something that is so natural,” Brantley said.

“First of all, we’ll certainly go completely green. Our emissions, our carbon footprint is reduced to almost zero. Secondly, we have a situation where you have the cost savings are likely to be anywhere from 40 to 50 per cent.

Traditionally we pay anywhere from 40 to 45 US cents per kilowatt hour. Geothermal is being offered at about 17 or 18 cents per kilowatt hour. So just imagine, your operating costs are cut dramatically and how that can attract businesses. We are already having interest from people wanting to do electric scooters so just think Jetsons,” Brantley added.

Brantley referred to the 1960’s American animated sitcom ‘The Jetsons’ where the family resides in Orbit City. All homes and businesses are raised high above the ground on adjustable columns. George Jetson lives with his family in the Skypad Apartments: his wife Jane is a homemaker, their teenage daughter Judy attends Orbit High School, and their early-childhood son Elroy attends Little Dipper School. Housekeeping is seen to by a robot maid, Rosie, which handles chores not otherwise rendered trivial by the home’s numerous push-button Space Age-envisioned conveniences.

“The idea here, if you can imagine a place where visitors come, there are electric cars, electric scooters and everything because we have a cheap source of energy. Not only that, the experts are telling us that we have maybe somewhere north of 150 megawatts of available energy. Nevis only uses 10, so you have enough to export to St. Kitts because they are just two miles away,” Brantley said.

“In fact we’ve already done the interconnectivity studies; but also islands that are within that radius so Antigua is a possibility because they have no prospects for geothermal energy there.

“Anguilla has no prospects there but we also have neighbouring islands like St. Barts, Saba, St. Eustatius who have potential so Nevis can potentially, I think in a year become a net exporter of energy. And as a net exporter of energy we can change the whole economic paradigm in terms of what we rely on here so that we can wean ourselves even off tourism as a main stay and have energy and energy production instead. So I think there are some exciting times ahead for Nevis,” he added.

Dominica recently launched its own geothermal project with plans to construct a small power plant for domestic consumption and a bigger plant of up to 100 mw of electricity for export to the neighbouring French islands of Guadeloupe and Martinique.

A Geothermal Energy Bill is to go before the House of Assembly in the first quarter of this year. Prime Minister Roosevelt Skerrit said the Geothermal Bill shows the commitment by his Government to pursue geothermal energy development.

“We’re hoping in the first quarter of this year to go to parliament to pass the legislation. It had to go through a rigourous review by our partners. That has been concluded. You know we had the challenge with the French consortium. We are engaging new partners but we’re also looking at the possibility of going with a small plant on our own. We’re engaging friendly governments, we’re engaging institutions,” he said.

“As you know we have an offer of a loan from the World Bank and that is still on the table. So the government now has to look at the financing options and decide which way it’s going to go with the geothermal plant. But we believe, notwithstanding the storm, it is important for us to pursue those renewable energy imperatives because based on advice, this would certainly be a major plus for the economy of Dominica.”

In August Tropical Storm Erika tore across Dominica, devastating villages, wrecking bridges and leaving a reconstruction bill worth half the country’s annual GDP.

About 10 inches of rain fell in a few hours, turning rivers on the mountainous island into torrents and hillsides into deadly mudslides. The capital Roseau was engulfed by water, and the island’s main airport was out of action for close to a month and will cost some 15 million dollars to repair. At least 31 people died in the storm.