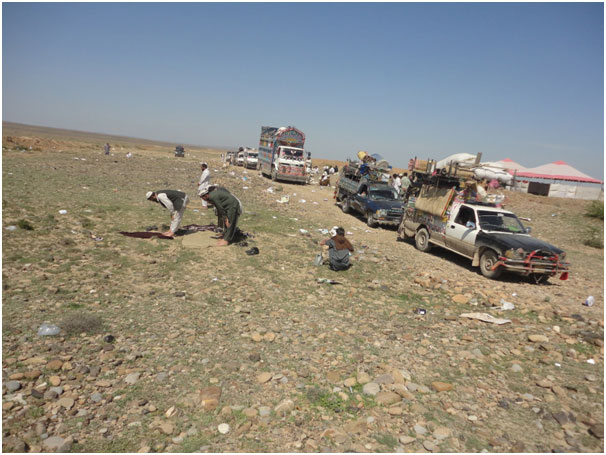 Displaced people leave for their homes in Fata after a successful military operation. Credit: Ashfaq Yusufzai/IPS

PESHAWAR, Pakistan, Feb 11 2016 (IPS) - A military operation by Pakistan’s army has been proving fatal for Taliban militants who held sway over vast swathes of the Federally Administered Tribal Areas (Fata) for over a decade. They crossed over the border from Afghanistan and took refuge in Fata after their government was toppled by US-led forces towards the end of 2001. After a few years, when they got a toe-hold in the region, they extended their wings to all seven districts of Fata. Not any more.

During those fateful years, schools were targetted as the militants are opposed to education. “Taliban destroyed more than 750 schools, mostly for girls, in Fata and Khyber Pakhtunkhwa between to 2005 to 2012,” Jaffar Ahmed, an official of Fata’s education department said. Fortunately, there was no incident of bombing of schools by the Taliban because the army campaign forced them to empty out of Fata. They have now lost the capability to operate freely due to the military offensive launched in early 2015.

Pakistan army launched operations against militants after the attack on the Army Public School in December 2014, killing 150 mostly pupils, This campaign was part of the National Action Plan approved by all political parties, which has now cleared 95 per cent of Fata of insurgents. Brigadier (retired) Mahmood Shah, former secretary security Fata, told IPS about the benefits of military action: “Taliban’s ruthlessness forced people to leave for safety. Now, the displaced have started returning to their ancestral areas.”

About 3 million had taken temporary refuge in adjacent Khyber Pakhtunkhwa, one of the Pakistan’s four provinces, out of which 500,000 people have returned as normalcy has returned to Fata. “We sighed with relief from the end of Taliban’s ruthlessness. We are overwhelmed by government’s announcement about our return,” said Muhammad Shabbir, a resident of Khyber Agency, one of Fata’s districts. “We left our native home when local Taliban destroyed schools and banned oral polio vaccine, he explained, adding that “Taliban are opposed to polio drops due to which they disallowed vaccinators in Fata. Likewise, they considered education against Islam and banned it.” He now hopes that children will get into schools very soon. Kids have also started receiving vaccination which was earlier completely banned by the Taliban.

On Feb. 5, shopkeepers resumed business activities in Bara Bazaar in Khyber Agency after seven long years. The bazaar was shut due to increasing militancy, which forced the people to stay away from businesses and take refuge somewhere else. “We have cleared the area of militants and have made elaborate arrangement for the security of the bazaar,” political agent Shahab Ali Shah informed IPS. Everyone entering the bazaar is thoroughly searched at the entry and exit points to ensure that militants don’t carry out acts of terrorism, he added. The bazaar would open at 8 am and close at 6pm. The government has installed closed-circuit television cameras at six points to monitor the people’s movements and ensure security, he added.

Shopkeepers are overwhelmed by the resumption of work. “We have suffered heavy economic losses due to terrorism and want complete peace. All the traders have given an undertaking to the government that the shopkeepers wouldn’t give donations to militants,” Abdul Jabbar, a trade leader said. We have also requested the government to give us soft loans to resume our businesses, he said. We desperately need financial assistance to be able to repair our damaged shops and start our businesses afresh, he said. “About 70 per cent of shops in the bazaar are in bad conditions for which we demand assistance to rebuild them,” he stated.

The government has also started repair work and reconstruction of the Taliban-damaged schools. “The Khyber Pakhtunkhwa has rebuilt 200 of the total 250 schools destroyed by Taliban,” Education Minister Atif Khan told IPS. We have allocated $10m for rebuilding schools in the province, he said. “Committees at the community level have been set-up to safeguard the schools,” he said. About 15,000 watchmen have been trained in security-related matters to cope with the situation, he said.

According to Director Education Fata, Muhammad Nadeem, “about 40,000 students have missed their studies and efforts were being made to enable those who remained out of schools to get back. “There would be no summer vacation in schools opened after military action so students could catch up with studies,” he elaborated. Students aren’t only back in schools but they are also playing different kinds of sports. “We appeal to the army to continue the campaign till the Taliban militants are eliminated so that durable peace is established,” felt Jawad Shah, a student of grade 10 at a school in the North Waziristan Agency, which was hitherto the headquarters of the Taliban in Fata.