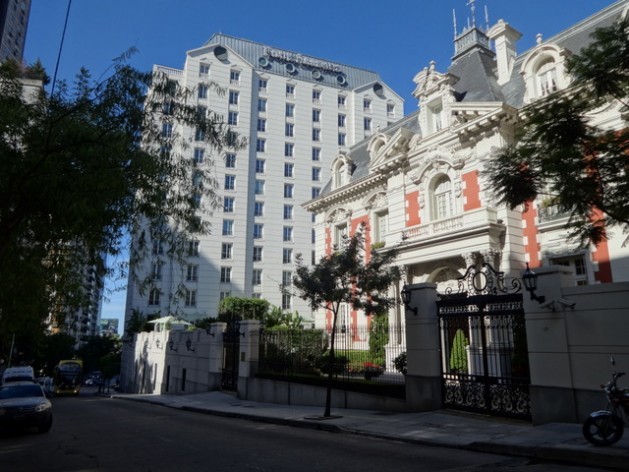 The Four Seasons hotel in the upscale Buenos Aires neighbourhood of Recoleta was remodeled this decade with a multi-million dollar investment by the Dubai-based Albwardy Investment Group. This is just one example of investment in Argentina by the United Arab Emirates, which is expected to increase in different sectors as a result of the visit here by the UAE’s foreign minister, Sheikh Abdullah bin Zayed Al Nahyan. Credit: Fabiana Frayssinet/IPS

BUENOS AIRES , Feb 1 2016 (IPS) - The new government of Argentina and the United Arab Emirates (UAE) are strengthening the relationship established by the previous administration, at a time when this South American country is seeking to bring in foreign exchange, build up its international reserves and draw investment, in what the authorities describe as a new era of openness to the world.

Bilateral ties will be boosted during a visit to the Argentine capital by the UAE’s foreign minister, Sheikh Abdullah bin Zayed Al Nahyan, on Feb. 4, the start of his Latin America tour which will also take him to Ecuador, Colombia, Panama and Costa Rica before he flies out of the region on Feb. 12.

After several high-level meetings on Feb. 5, the minister’s visit will end with the signing of five agreements on taxation, sports, cooperation between the state news agencies Telam (Argentina) and WAM (UAE), and an Emirati loan to the southern province of Neuquén.

Mauricio Macri, who was sworn in as president of Argentina on Dec. 10, already indicated his interest in stronger ties when he met on Jan. 20, during the World Economic Forum in Davos, Switzerland, withHamad Shahwan al Dhaheri, executive director of the private equities department of the Abu Dhabi Investment Authority (ADIA).

The centre-right Macri, of the Cambiemos coalition, and Al Dhaheri“discussed the prospects opening up for Argentina and were enthusiastic about this new era for the country,” Telam reported from Davos.

The news agency was referring to the end of 12 years of government by the late Néstor Kirchner (2003-2007) and his widow and successor, Cristina Fernández (2007-2015), of the Front for Victory, the Justicialista (Peronist) Party’s centre-left faction, which defines itself as anti-neoliberal.

“Argentina has to position itself as a serious, predictable interlocutor,” this country’s foreign minister, Susana Malcorra, said in Davos.

“The question of economic opening, the search for investment and business opportunities is essential in our agenda,” she stressed.

According to a report from its embassy in Buenos Aires, the UAE has a significant presence in international capital markets through different investment institutions, such as ADIA, Dubai Ports World, Dubai Holding and Abu Dhabi’s International Petroleum Investment Co. 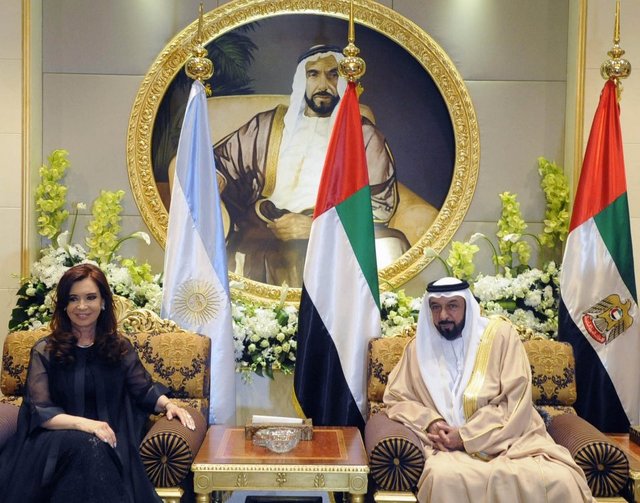 The then president of Argentina, Cristina Fernández, with her host, United Arab Emirates President Khalifa bin Zayed Al Nahyan, at a January 2013 meeting in Abu Dhabi during her official visit to the Gulf nation when bilateral relations were given a major boost. Credit: Government of Argentina

The UAE is a timely interlocutor for Argentina, Luis Mendiola, an expert on the Middle East, the Arab world and Africa with the Argentine Council for Foreign Relations (CARI), underlined in an interview with IPS.

“Their biggest problem is the extraordinary abundance of capital…the question is where to put it to get the best returns on the extraordinary surplus capital they produced during nearly a decade and a half of high oil prices,” added Mendiola, who served as ambassador to Saudi Arabia from 1996 to 2005.

As part of its strategy of strengthening ties with Latin America, the foreign ministry of the United Arab Emirates held a workshop in Abu Dhabi in December with diplomats from Argentina, Colombia, Ecuador and Panama, with the participation of some 70 UAE governmental, semi-governmental and private organisations.

At the workshop, the director of the foreign ministry’s department of economic affairs and international cooperation, Fahad al Tafaq, stressed the UAE’s interest in taking ties with Latin America “to a higher level” in order to serve common interests, WAM, the Emirates news agency, reported from Abu Dhabi.

The participants in the workshop discussed opportunities for investment and strategic alliances in sectors like energy, environment, technology, tourism, agriculture, mining, peaceful uses of nuclear energy, infrastructure and natural resources.

These funds, he said, could go into major infrastructure projects in areas like housing, energy, transport and communications.

In January 2015, the authorities in the southern Argentine province of Neuquén reported that they had secured an 18 million dollar loan from the Abu Dhabi Fund for Development, to finance the Nahueve Hydroelectric Project for the promotion of irrigation in new productive areas, among other aims.

The two countries established diplomatic ties in 1975 and opened embassies in 2008. But relations moved to a new plane when President Fernández visited Abu Dhabi in January 2013, where she met with UAE President Khalifa bin Zayed al Nahyan.

During that visit, cooperation agreements were signed in the area of food, with the opening of the Emirati market to non-traditional Argentine products, and this country opened its first business office in the UAE.

In 2014, as the Argentine-Arab Chamber of Commerce informed IPS, trade between Argentina and the UAE amounted to 228 million dollars, with this South American country enjoying a surplus, exporting 198.9 million dollars in mainly foodstuffs and steel pipe and tube products.

But Mendiola believes there is greater potential to tap because besides boasting one of the highest per capita incomes in the Gulf, the UAE is a business hub which re-exports products to third countries and large markets, such as Saudi Arabia, India, Iran and Pakistan.

Bilateral ties were reinforced in April 2014, with a visit to Argentina by Mohammed bin Rashid Al Maktoum, vice president and prime minister of the UAE and emir of Dubai.

A memorandum of understanding for cooperation in the peaceful use of nuclear energy was signed during that visit.

On that occasion, Fernández emphasised the Argentina forms part of the “exclusive club” of nations “that can produce nuclear energy, but that do so on a non-proliferation basis.”

The then president also referred to the UAE’s “enormous interest” in investing in Argentina and financing projects aimed at bolstering food security.

In November 2015, with support from the local government, five family farming cooperatives from Argentina took part in an international specialty food festival in Dubai.

During the meeting in Buenos Aires, agreements were also reached to promote tourism initiatives and projects in renewable energy – an area in which the UAE, despite its status as one of the world’s largest oil producers, is considered a pioneer among the Gulf countries and even at the international level, Mendiola noted.

“The Emiratis are very good at forging ahead and moving into new areas, and in that sense they are a model, at least in the Gulf region,” he added.

During his visit to Argentina, Al Maktoum remarked that his country did not invest “according to preferences or political motives, but based on economic questions.”

For that reason Mendiola said he was not “surprised” by the UAE’s interest in Latin America “because the Gulf countries in general have always had extremely pragmatic foreign policies which are at the same time modest, in terms of maintaining a low profile.”

“I think the difference now is they are taking advantage of the fact that there is a new government in Argentina, which presents itself to the world as very different from the last one, and that is raising a lot of interest because they have an extraordinary level of reserves as well as investment abroad,” he said.

Mendiola pointed out that the UAE did not have a “clear” presence in Latin America until recently, unlike in Africa and Asia.

“Up to now, South America was a caboose for the Gulf countries, from the point of view of their economic interests. And the change in government without a doubt awakened curiosity and interest in seeing how to best take advantage of these opportunities,” he added.