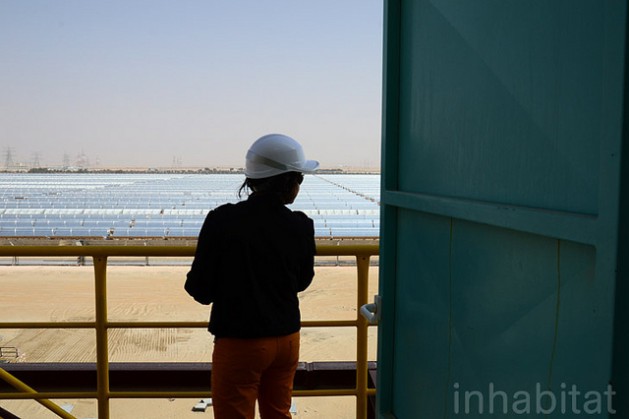 UNITED NATIONS, Jul 28 2015 (IPS) - When the government of Kenya hosted a U.N. Conference on New and Renewable Sources of Energy in Nairobi back in 1981, one of the conclusions at that meeting was a proposal for the creation of an international agency dedicated to renewable energy.

Described as energy efficient and almost car-free, Masdar City aims to prove that cities can be sustainable, even in harsh sun-driven environments as in UAE.

The distinction to host that agency went to the United Arab Emirates (UAE), described as one of the pioneers of renewable energy.

On more than one occasion, Secretary-General Ban Ki-moon has singled out the UAE for its relentless contribution towards the U.N.’s ultimate goal of Sustainable Energy for all (SE4ALL).

The United Arab Emirates has been “a strong supporter of renewable energy”, he said, with its key initiative to locate IRENA in Abu Dhabi.

Currently, the UAE hosts not only IRENA, described as the first international organisation to be based in the Middle East, but also the Dubai Carbon Center of Excellence (DCCE).

The DCCE is a joint initiative between the U.N. Development Programme (UNDP) and the Dubai Supreme Council of Energy aimed at promoting low carbon in Dubai.

IRENA is headed by Director-General Adnan Z. Amin of Kenya.

The concept of SE4ALL takes on added importance in the context of the U.N.’s post-2015 development agenda, which will be adopted by over 150 political leaders at the upcoming world summit meeting in September.

The new development agenda is expected to be one of the world body’s most ambitious endeavours to eradicate poverty and hunger by 2030.

But the 17 Sustainable Development Goals (SDGs), which will be an integral part of that agenda, will also include SE4ALL.

In keeping with SDGs and the U.N.’s development agenda, IRENA is pursuing and supporting international efforts to double the share of renewable energy by 2030, according to a new roadmap launched by the agency back in 2013.

The secretary-general is convinced sustainable energy “is among the most critical issues of our time.”

One out of every five persons has no reliable access to electricity, he pointed out, and more than double this number – 40 per cent of the global population — still relies on biomass for cooking and heating.

“This is neither equitable nor sustainable,” says Ban.

According to the United Nations, energy is central to everything we do, from powering our economies to empowering women, from generating jobs to strengthening security. And it cuts across all sectors of government and lies at the heart of a country’s core interests.

A prime example of an energy efficient project is Masdar City located in Abu Dhabi and built by Masdar, a subsidiary of Mubadala Development Company, with the majority of seed capital provided by the Government of Abu Dhabi.

At the Abu Dhabi Sustainability Week in January 2013, which included an international conference on renewable energy, delegates and journalists were taken on a guided tour of Masdar City.

Described as energy efficient and almost car-free, the project aims to prove that cities can be sustainable, even in harsh sun-driven environments as in UAE.

The entire city is powered by a 22-hectare field of over 87,777 solar panels on the roofs of the buildings. And cars have been replaced by a series of driverless electric vehicles that ferry residents around the site.

The design of the walls of the buildings (cushions of air limit heat-radiation) has helped reduce demand for air conditioning by 55 percent.

There are no light switches or taps — just movement sensors that have reduced electricity consumption by 51 percent, and water usage by 55 percent.

In December 2012, the 193-member General Assembly adopted a resolution declaring the Decade for Sustainable Energy for All which runs through 2024.

Without electricity, the resolution stressed there was a need “to improve to reliable, affordable, economically-viable, socially-acceptable and environmentally-sound energy sources for sustainable development.”

Last year, the United Nations, along with UAE, co-hosted the Abu Dhabi Ascent in support of the 2014 Climate Summit in September.

The consultations focused on several key issues, including the increased the use of renewable energy sources, improving energy efficiency, reducing emissions from transportation, and deploying climate-smart agriculture.

Accompanied by UAE’s Special Envoy for Energy and Climate Change, Sultan Ahmed al Jaber, Ban helicoptered to the Shams Power Plant, which opened in 2013, and which is a concentrated solar power (CSP) station with 100MW capacity.

Described as the largest single-unit CSP plant in the world, Shams 1 will generate enough electricity to power 20,000 homes and covers an area of about 2.5 square kilometres.

According to current plans, there will be two other similar plants, Shams 2 and Shams 3.

The secretary-general flew to Dubai to meet with Sheikh Mohammed bin Rashid al Maktoum, Prime Minister of UAE and ruler of Dubai.

Thanking the UAE for its support of United Nations humanitarian efforts in Syria, Ban commended the Arab nation for its investments in renewable energies.