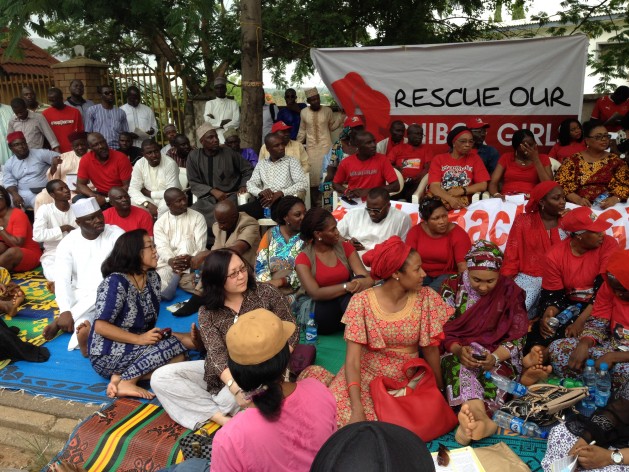 The Lake Chad Basin comprises of over 30 million residents from Nigeria, Cameroon, Chad and Niger. While visiting Northeastern Nigeria, Lanzer saw rampant poverty and food insecurity in the region with villages that were “completely deserted, completely destroyed.”

Children especially bear the brunt of this insecurity.

According to the UN’s children agency (UNICEF), of the almost 3 million people displaced by Boko Haram-related insecurity, 1.3 million are children. This is one of the fastest growing displacement crises in Africa, UNICEF noted.

In its new report, the UN children’s agency found that the number of children with severe acute malnutrition spiked in one year from 149,000 to almost 200,000.

Youth also continue to face threats of kidnapping and recruitment.

With the second anniversary for the Chibok kidnappings soon approaching, the majority of the girls still remain missing. However, Lanzer noted that this is just one case.

“The plight of the girls who were taken…that is one awful example, in a litany of awful examples,” he said, adding that the those who have been taken by Boko Haram now number in the thousands.

As they continue to disappear from the Lake Chad Basin, children as young as eight years old are increasingly used in suicide attacks.

One out of every five suicide bombers deployed by the terrorist group has been a child and are mostly girls, UNICEF reported.

“To me, that’s the epitome of evil,” Lanzer told reporters at a press briefing. “I cannot think of anything more horrifying.”

The report found that 44 children were used in suicide attacks in 2015, a ten-fold increase from 2014. Cameroon had the highest number of attacks involving children, reflecting the increased spillover of violence in the region.

Many kidnapped girls also experience sexual violence and forced marriage. In one account, Cameroonian 17-year-old Khadija told UNICEF that she was kidnapped while visiting her mother in Nigeria and forced to marry to one of the group’s militants.

“’If you don’t marry us, we will kill you,’ they said. ‘I will not marry you, even if you kill me,’ I responded. Then they came for me at night. They kept me locked in a house for over a month and told me ‘whether you like it or not, we have already married you,’” she recalled.

For those who do return home, communities often shun them out of fear that they will turn against their families.

Khadija revealed the discrimination she faced after escaping Boko Haram and arriving at a displacement camp.

“Some women would beat me, they would chase me away. Everywhere I went, they would abuse me and call me a Boko Haram wife,” she said.

Lanzer urged for a broader engagement in the Lake Chad Basin to address not only short-term relief, but also long-term development and security challenges to help stabilise the situation.

“More can be done,” he said. “I know that every donor capital at the moment is stretched…but when I see the scale of destruction and the level of suffering that stared me at the face…I haven’t seen anything worse anywhere recently,” he concluded.

So far, UNICEF has only received 11 percent of its $97 million appeal to provide lifesaving assistance to families affected by Boko Haram violence in the Lake Chad Basin.