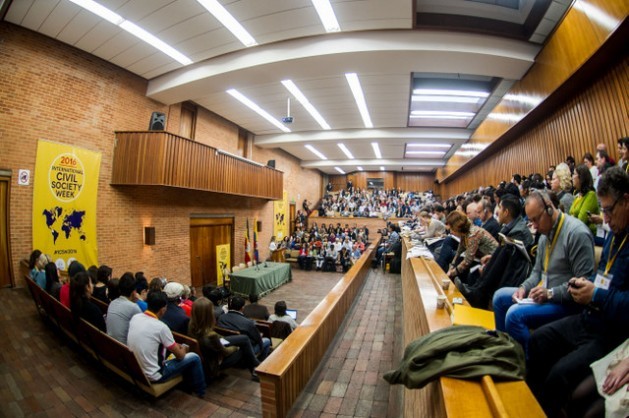 Participants in the biannual International Civil Society Week 2016, held in Bogotá, waiting for the start of one of the activities in the event that drew some 900 activists from more than 100 countries. Credit: CIVICUS

BOGOTA, Apr 29 2016 (IPS) - When Tamara Adrián, a Venezuelan transgender opposition legislator, spoke at a panel on inclusion during the last session of the International Civil Society Week held in Bogotá, 12 Latin American women stood up and stormed out of the room.

Adrián was talking about corruption in Venezuela, governed by “Chavista” (for the late Hugo Chávez) President Nicolás Maduro, and the blockade against reforms sought by the opposition, which now holds a majority of seats in the legislature.

The speaker who preceded her, from the global watchdog Transparency International, referred to corruption among left-wing governments in South America.

Outside the auditorium in the Plaza de Artesanos, a square surrounded by parks on the west side of Bogotá, the women, who represented social movements, argued that, by stressing corruption on the left, the right forgot about cases like that of Fernando Collor (1990-1992), a right-wing Brazilian president impeached for corruption.

“Together, civil society has power…If we work together and connect with what others are doing in other countries, what we do will also make more sense.” -- Raaida Manaa

“Why don’t they mention those who have staged coups in Latin America and who have been corrupt?” asked veteran Salvadoran activist Marta Benavides.

Benavides told IPS she was not against everyone expressing their opinions, “but they should at least show respect. We don’t all agree with what they’re saying: that Latin America is corrupt. It’s a global phenomenon, and here we have to tell the truth.”

That truth, according to her, is that “Latin America is going through a very difficult situation, with different kinds of coups d’etat.”

She clarified that her statement wasn’t meant to defend President Dilma Rousseff, who is facing impeachment for allegedly manipulating the budget, or the governing left-wing Workers’ Party.

“I want people to talk about the real corruption,” she said. “In Brazil those who staged the 1964 coup (which ushered in a dictatorship until 1985) want to return to power to continue destroying everything; but this will affect everyone, and not just Brazil, its people and its resources.”

In Benavides’ view, all of the panelists “were telling lies” and no divergent views were expressed.

But when the women indignantly left the room, they missed the talk given on the same panel by Emilio Álvarez-Icaza, executive secretary of the Inter-American Commission on Human Rights (IACHR), who complained that all of the governments in the Americas – right-wing, left-wing, north and south – financially strangled the IACHR and the Inter-American Court of Human Rights. 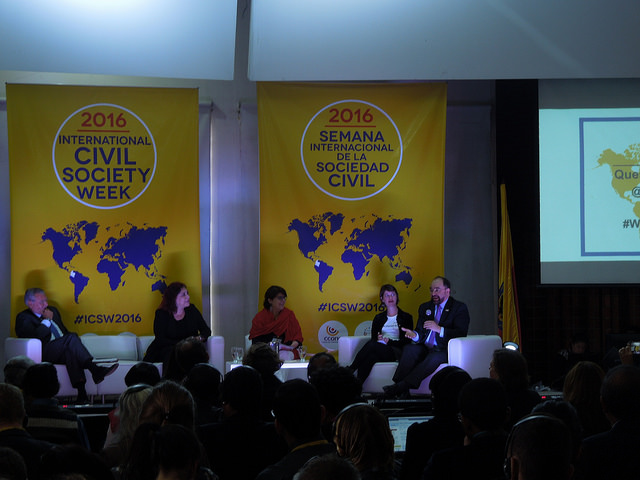 Emilio Álvarez-Icaza, executive secretary of the Inter-American Commission on Human Rights (IACHR), the last one on the right, speaking at an International Civil Society Week panel on the situation of activism in Latin America. Credit: Constanza Vieira/IPS

He warned that “An economic crisis is about to break out in the Inter-American human rights system,” which consists of the IACHR and the Court, two autonomous Organisation of American States (OAS) bodies.

“In the regular financing of the OAS, the IACHR is a six percent priority, and the Inter-American Court, three percent,” said Álvarez-Icaza.

“They say budgets are a clear reflection of priorities. We are a nine percent priority,” he said, referring to these two legal bodies that hold states to account and protect human rights activists and community organisers by means of precautionary measures.

He described as “unacceptable and shameful” that the system “has been maintained with donations from Europe or other actors.”

There were multiple voices in this disparate assembly gathered in the Colombian capital since Sunday Apr. 24. The meeting organised by the global civil society alliance CIVICUS, which carried the hashtag ICSW2016 on the social networks, drew some 900 delegates from more than 100 countries.

The ICSW2016 ended Friday Apr. 29 with the election of a new CIVICUS board of directors.

Tutu Alicante, a human rights lawyer from Equatorial Guinea, is considered an “enemy of the state” and lives in exile in the United States. He told IPS that “we are very isolated from the rest of Africa. We need Latin America’s help to present our cases at a global level.”

Equatorial Guinea’s President Teodoro Obiang has been in power for 37 years. On Sunday Apr. 24 he was reelected for another seven years with over 93 percent of the vote, in elections boycotted by the opposition. His son is vice president and has been groomed to replace him.

“Because of the U.S. and British interests in our oil and gas, we believe that will happen,” Alicante stated.

He said the most interesting aspect of the ICSW2016 was the people he met, representatives of “global civil society working to build a world that is more equitable and fair.”

He added, however, that “indigenous and afro communities were missing.”

“We’re in Colombia, where there is an important afro community that is not here at the assembly,” Alicante said. “But there is a sense that we are growing and a spirit of including more people.”

He was saying this just when one of the most important women in Colombia’s indigenous movement, Leonor Zalabata, came up. A leader of the Arhuaco people of the Sierra Nevada de Santa Marta mountains, she has led protests demanding culturally appropriate education and healthcare, and indigenous autonomy, while organising women in her community.

She was a keynote speaker at the closing ceremony Thursday evening.

A woman with an Arab name and appearance, Raaida Manaa, approached by IPS, turned out to be a Colombian journalist of Lebanese descent who lives in Barranquilla, the main city in this country’s Caribbean region.

She works with the Washington-based International Association for Volunteer Effort.

“The most important” aspect of the ICSW2016 is that it is being held just at this moment in Colombia, whose government is involved in peace talks with the FARC guerrillas. This, she said, underlines the need to set out on the path to peace “in a responsible manner, with a strategy and plan to do things right.”

The title she would use for an article on the ICSW2016 is: “Together, civil society has power.” And the lead would be: “If we work together and connect with what others are doing in other countries, what we do will also make more sense.”

In Colombia there is a large Arab community. Around 1994, the biggest Palestinian population outside the Middle East was living in Colombia, although many fled when the civil war here intensified.

“The peaceful struggle should be the only one,” 2015 Nobel Peace Prize-winner Ali Zeddini of the Tunisian Human Rights League, who took part in the ICSW2016, said Friday morning.

But, he added, “you can’t have a lasting peace if the Palestinian problem is not solved.” Since global pressure managed to put an end to South Africa’s apartheid, the next big task is Palestine, he said.

Zeddini expressed strong support for the Nobel peace prize nomination of Marwan Barghouti, a Palestinian leader serving five consecutive life sentences in an Israeli prison. He was arrested in 2002, during the second Intifada.