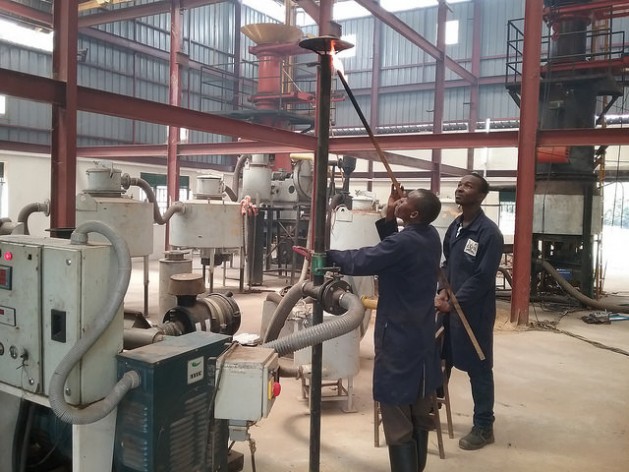 Workers powering the gasification plant at Nyabyeya in Uganda. Biomass is increasingly being viewed as a viable alternative to fossil fuels and a way to boost Africa’s renewable energy transition. Credit: Wambi Michael/IPS

KAMPALA, Uganda, May 11 2016 (IPS) - As fuel, firewood remains the dominant source of energy in Uganda. It has a long history of being unsustainably harvested, leading to severe depletion of the country’s forest cover. But with new technology, biomass is now cleaning up its act.

Scientists and energy advocates have found ways of generating enough electricity to power homes and even large industrial operations. Nyabyeya Forestry College, located on the fringes of Uganda’s Budongo Forest, had been facing regular power blackouts until the college, with assistance from the Energy and Mineral Development Ministry, decided to tap into an abundant local resource.

The college runs a sawmill as part of its forestry course. In the past, wood cuttings from the sawmill would be burnt to ashes or buried in the ground. Now, the cuttings are burned with the use of modern technology to produce gas that generates power.

“In this rural setting, we are able to produce our own electricity,” Richard Kisakye, the head of the biomass energy generation plant at Nyabyeya Forestry College, told IPS. “If we were using diesel alone, we would use seven litres of diesel per hour to power the diesel generator at the college. But if we use biomass and gasify it, we use 1.5 litres of diesel per hour to produce the same amount of electricity.”

Biomass has been identified by the International Renewable Energy Agency (IRENA) as among the prime renewable energy resources that Uganda and other African countries could tap into to power their energy needs. It comprises waste material, products, residues, and byproducts from agriculture, plants, manure, and industrial wastes, among other materials.

The electricity is produced through a process known as gasification. Gasification means changing solid biomass material into gaseous fuels, so that instead of burning diesel or petrol in an engine, you burn the gas that comes from wood. The engine is then connected to a generator to generate electricity.

The Nyabyeya plant generates up to 50 kilowatts of electricity, which according to Kisakye, is far more than what the college requires.

“The maximum we use is 20 kilowatts of power when the whole college is using power including staff quarters. But the small system is generating 50 kilowatts of electricity. So we have excess power,” said Kisakye.

A majority of the people in rural Uganda are poor. They consume fuel wood that is gathered as dry, fallen pieces and twigs, and in some instances agricultural waste.

But the results from projects like the Nyabyeya biomass energy plant are renewing interest in wood and biomass as larger scale energy sources, and an alternative to fossil fuels. Uganda’s Energy Ministry estimates that the country has 1650 megawatts of biomass potential.

Recent studies have indicated that the country has 286 million tonnes of standing wood biomass with a mean annual growth of 50 million tonnes per year.

Godfrey Ndaula, the commissioner in charge of renewable energy, told IPS that Uganda’s main challenge is not a sufficient supply of biomass but rather the technology to utilise the diverse forms of biomass.

He said there is a wide range of non-traditional forms of biomass that have not been harnessed mainly due to a lack of technology.

“If you look at the energy consumed in Uganda, 92 percent is biomass. Yet the devices we are using for its exploitation are just like what Stone Age man used. We have open earth systems for cooking, even fish smoking, brick burning – we are still using very inefficient systems,” said Ndaula.

Ndaula told IPS that the biomass energy value chain in Uganda, like many parts of Africa, is closest to rural communities and is likely to receive social acceptability compared to other forms of available energy. In addition, participation in the value chain has the potential to reduce poverty and create conditions for wealth generation.

Overall, some 620 million people in Sub-Saharan Africa, out of over 970 million, do not have access to electricity, even as demand is expected to surge six percent annually.

Ndaula noted that the sugar industry in Uganda has taken advantage of technology advancement by turning bagasse – once a big disposal problem – into one of the major sources of energy for thermal electricity production.

Coffee husks have long been used as a natural fertilizer and sometimes as simple fuel. But the husks are now being extended way beyond just a simple addition to gardens.

In Uganda’s Kasese district, Hima Cement, part of the global cement manufacturing giant LafargeHolcim, has been mobilising farmers to grow more coffee, so it can buy the husks and use them as a source of energy in cement production.

Julius Lukoma, a plant manager at Hima Cement, told IPS that the initiative has been embraced by farmers, who are now supplying enough husks to power the big cement plant. Some of the husks come from as far away as Tanzania and the Democratic Republic of Congo.

“Every year, we are realising growth of about 10 percent increment. In 2002, we were using 10 percent of biomass to power our operations. Today we are at about 57 percent. Our ambition as a company in terms of alternative fuels is that we want to stop using heavy furnace oil,” said Lukoma.

He told IPS that each tonne of Ordinary Portland Cement (OPC) produced releases on average 0.5 tonne equivalent of carbon dioxide (CO2) into the atmosphere.

Hima Cement, located near the Uganda–DRC, border had been fully powering its production by heavy furnace oil (HFO), which was expensive and polluting to the environment.

In October 2015, IRENA released the Africa 2030 roadmap for Africa’s energy transition. The report found that half of all energy use in Africa today involves traditional biomass consumption.

“Modernising use of biomass creates a huge potential for Africa to benefit by improving the lives of the people and access to clean energy. Africa’s governments should create conditions to accelerate deployment of technology to modernise biomass to pave way for Africa’s unfettered, sustainable development,” said Miketa, who leads a programme to build energy planning activities in Africa, Asia, and Latin America.