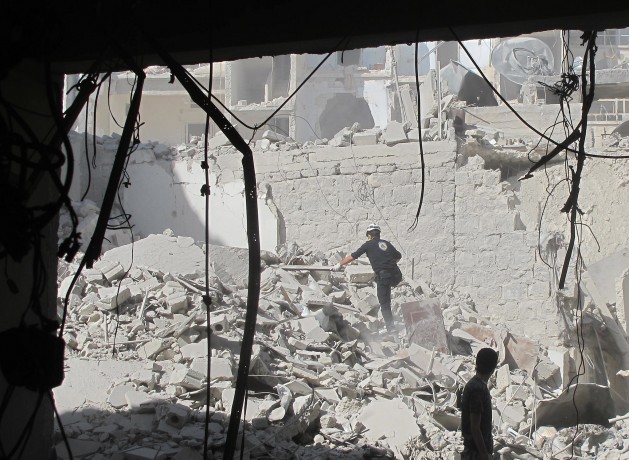 A civil defence team in Aleppo, Syria searches for survivors after a barrel bomb attack in August 2014. Credit: Shelly Kittleson/IPS

UNITED NATIONS, May 22 2016 (IPS) - Boats carrying refugees and boats carrying aid supplies will be on the agenda at the World Humanitarian Summit this week, but advocates say discussing the free flow of shipments carrying bombs and guns might be even more critical.

This is partly because a stark contradiction exists, many of the same Western countries sending humanitarian aid to countries in conflict are also continuing to supply weapons which are being used in these same conflicts.

“The contradiction is there and it is stark,” Belkis Wille, Yemen researcher at Human Rights Watch told IPS.

Wille says that there has been “a dramatic increase in new arms sales” since conflict broke out in Yemen in March 2015. In the ensuing months the humanitarian situation in the impoverished Middle Eastern country has deteriorated significantly, with the UN reporting that 80 percent of the countries population is in need of humanitarian assistance.

Weapons suppliers including the United States, the United Kingdom, France and Spain continue to sell arms to Saudi Arabia despite reports from rights groups including Human Rights Watch and Amnesty International that these weapons have been used against civilians, including bombings of markets and hospitals, in Yemen.

“There’s a real question in my mind as to why a country would continue to supply weapons to (the Saudi-led) coalition, and allow the coalition to essentially get away scot free with numerous indiscriminate attacks that are having such a detrimental effect on the civilian population, and then essentially footing the bill for it,” said Wille.

“Of course you can’t achieve basic development goals if your country is spending too much money on military expenditure, and has high levels of violence or conflict" -- Anna Macdonald, Control Arms.

Some of the governments supplying arms to Saudi Arabia are also some of the world’s biggest aid donors, including the United States, which provides over 30 percent of the humanitarian assistance provided by governments.

Wille noted that asking the countries to stop selling to Saudi Arabia was about pressuring the Saudi-led coalition to “improve the plight of Yemeni civilians on the ground”.

In addition to pushing the Saudis to minimise civilian casualties, she said that putting pressure on them through restricting arms sales could also push Saudi Arabia “to let more commercial shipments into Yemen therefore easing the humanitarian crisis.”

The bombs falling on Yemen are not the only weapons fuelling humanitarian crises.

The free flow of guns, including AK-47s, which originated in the Soviet Union but have since been produced by many different countries, is fuelling violence across many countries in Africa.

Anna Macdonald, Director of Control Arms, hopes that countries attending the World Humanitarian Summit will commit the Arms Trade Treaty, which sets rules in place to ensure that weapons don’t end up in the wrong hands.

Macdonald hopes in particular to see more African countries fully join the treaty during the summit. She says that very few of the weapons that end up in Africa are manufactured there and that the proliferation of weapons is undermining development.

One of the reasons is that governments in both rich and poor countries continue to spend large amounts of money on military expenditure.

“Of course you can’t achieve basic development goals if your country is spending too much money on military expenditure, and has high levels of violence or conflict.”

While Macdonald is happy that so many countries have signed up to the United Nations treaty since it came into effect in December 2014, she is concerned that many countries either don’t have the means or the will to implement it.

She hopes that a promised trust fund will be set up to assist countries like the Central African Republic to implement the treaty.

“It’s very positive that a country that has experienced so much armed conflict wants to be part of a more responsible arms trade,” she said, but “there are so many problems with their borders, with their stockpile management, with adherence to human rights standards.”

On the other hand, she expressed concerns that the United Kingdom has not implemented the treaty, despite having the means to do so.

“The United Kingdom did join and ratify the treaty very early on but now it’s violating it, that’s not ok, that’s not good enough,” she said.

The World Humanitarian Summit will take place in Istanbul, Turkey on May 23 and 24.

The meeting is meant to address the massive gaps in the delivery of assistance to the millions of people whose lives are affected by crises worldwide.

Ahead of the summit many international aid organisations have chosen to focus on reducing this need rather than calling for more funding for their own programs.

One of the biggest problems identified by these organisations is the seeming deterioration of respect for humanitarian principles in conflicts.

Even wars have laws, and these govern everything from the protection of civilians and hospitals, to the sales of weapons.

In his report prepared ahead of the summit, UN Secretary General Ban Ki-moon called for governments to come to the meeting ready to make commitments to “uphold the norms that safeguard humanity,” this includes increasing their commitments to the Arms Trade Treaty.