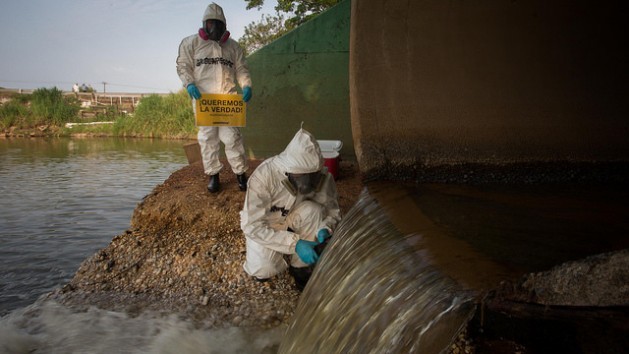 Two Greenpeace technicians take water samples from a river that runs by the Pajaritos Petrochemical Complez in the Mexican city of Coatzacoalcos, where an Apr. 20 explosion in the Planta Clorados III plant left 32 people dead and 136 injured. Credit: Greenpeace Mexico

MEXICO CITY, May 6 2016 (IPS) - A recent explosion at a petrochemical plant in southeast Mexico highlighted the need to strengthen monitoring of hazardous substances, step up inspections of factories and update regulations in this country.

The Apr. 20 blast at the Clorados III plant in the Pajaritos Petrochemical Complex in the port city of Coatzacoalcos, Veracruz state, left 32 dead and 136 injured.

“One basic problem is the handling of toxic chemicals,” Robin Perkins, the Detox Programme leader at Greenpeace Mexico, told IPS. “This is a country with few regulations and the list of regulated and controlled substances is short. There is a lack of regulations, inspections and reviews.”

The plant, which belongs to Petroquímica Mexicana de Vinilo (PMC), a public-private petrochemical company, produces 170,000 tons a year of polyvinyl chloride (PVC), which generates dioxins and furans, and has two incinerators.

Dioxins and furans are environmental pollutants that belong to the so-called “dirty dozen” – a group of dangerous chemicals known as persistent organic pollutants (POPs). According to the World Health Organisation (WHO), POPs are present throughout the food chain and bio-accumulate in organisms.

Vinyl chloride, a known carcinogen, is found in gas and liquid form, and through inhalation or contact with skin it can cause dizziness, drowsiness, and headaches, while long-time exposure can lead to severe skin problems or liver damage.

“It is important to monitor these kinds of chemicals, not only through environmental samples but also in the biota, and in exposed human populations, such as workers or local residents,” said Fernando Díaz-Barriga, a researcher at the Coordination for the Innovation and Application of Science and Technology at the public Autonomous University of San Luis Potosí.

To do that, he told IPS, “they must be detected in sediments and soils.”

For the past three decades, Díaz-Barriga has studied the impact of these substances on human health and the environment, including in the area of Pajaritos, and the result has always been the same: high levels of toxic compounds and elements.

In the wake of the explosion at the petrochemical plant, one of the worst environmental disasters in the history of Mexico due to the possible emission of dioxins, Greenpeace experts took samples of water, soil and dust in nearby communities, to detect pollutants.

The material is now being analysed at the University of Exeter in Britain and independent laboratories, and the results will be published in a few weeks.

Two weeks earlier, Díaz-Barriga had gathered samples of biota, soil and sediment around the Pajaritos complex, to identify POPs in the area, which is near the Gulf of Mexico and the mouth of a river.

The PVM company emerged in 2013 from an alliance between the private firm Mexichem, which holds a 54 percent share and runs the plant, and the state-run oil company Pemex, which owns 46 percent.

The accident was not an isolated incident. 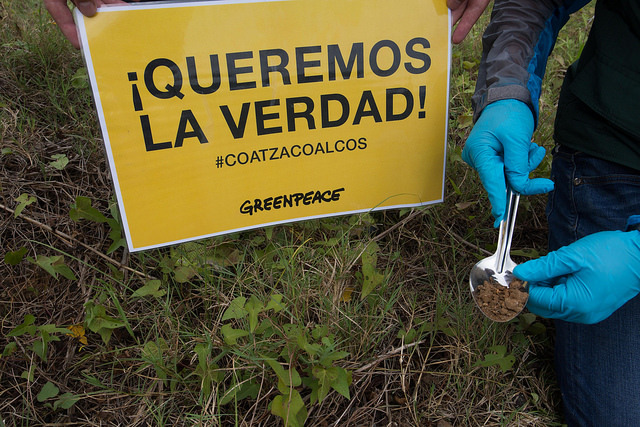 “We want the truth!” about what happened in an explosion of a polyvinyl chloride (PVC) plant in a petrochemical complex in the city of Coatzacoalcos in southeast Mexico, reads a Greenpeace sign, while a technician takes a soil sample after the disaster. Credit: Greenpeace Mexico

In Pajaritos there have been at least three accidents since 1991, and there are an average of 600 emergencies a y ear involving hazardous materials in Mexico, and at least one major disaster every 12 months, according to the environmental justice programme in the Federal Agency of Environmental Protection (PROFEPA).

The explosion in the plant underscored the importance of Mexico living up to the Stockholm Convention on Persistent Organic Pollutants, signed in 2001 and in effect since 2004.

The Convention is aimed at eliminating or reducing levels of nine chemicals used as pesticides, dioxins, furans and polychlorinated biphenyls – elements involved in the blast in Coatzacoalcos.

Every two years, parties to the convention meet to decide which additional chemicals should be added to the original “dirty dozen”. The next meeting is in 2017.

In Mexico, the Updating of the National Implementation Plan for the Stockholm Convention, which is reviewing the first plan from 2007, makes it clear how far the country still is from being up-to-date with respect to hazardous materials.

The evaluation for modernising the plan stresses the lack of a national network of laboratories for studying POPs, a formal programme for monitoring them, and a basic studies programme to identify trends involving these compounds.

Another problem is that the new industrial POPs that emerge are not studied, which means the country is not fully complying with the Stockholm Convention.

Greenpeace is calling for a longer list of regulated substances, a mandatory greenhouse gas emissions registry, and stricter penalties for polluters.

On Apr. 28, PROFEPA closed down the Clorados III plant indefinitely, instructed the company to remove and safely confine substances like hydrochloric acid, ethane, and ethylene, and ordered it to carry out an impact study and a damage remediation programme.

In 2013, the government’s Registry of Emissions and Transference of Pollutants covered 3,523 establishments that reported 73 substances released into the air, water and soil or transferred in waste or discharge.

Of 135 substances identified as hazardous by various international bodies, 43 have been included in 13 laws in Mexico.

“The difficult thing is establishing new substances as the convention is updated,” said Díaz-Barriga. “The disaster in Pajaritos showed that we were right, that the monitoring programme is important. This is a problem of national priority.

“But the environmental issue has been pushed to the backburner, because it’s not a priority for the country; it only arises when these accidents happen.”

As part of the National Plan for the Stockholm Convention, Mexico plans to update and modify its regulations on the characteristics, handling, identification and classification of hazardous waste.

It also plans to expand the list of hazardous substances and establish stricter regulations with regard to emission limits on particulate matter from fixed installations.

The process will take at least two years.

The plan also establishes the modification of the General Law of Ecological Balance and Environmental Protection, in effect since 1988, with a special annex on POPs and chemical substances.

In addition, it proposes monitoring the presence of pesticides and other POPs in food, soil, water and air, and assessing the effective application of the measures, as well as a programme to hold companies accountable for proper handling of these pollutants.

By 2024, Mexico plans to have a programme to monitor POPs in the atmosphere and in breast milk, and to gauge the economic costs of these pollutants for the environment and health.