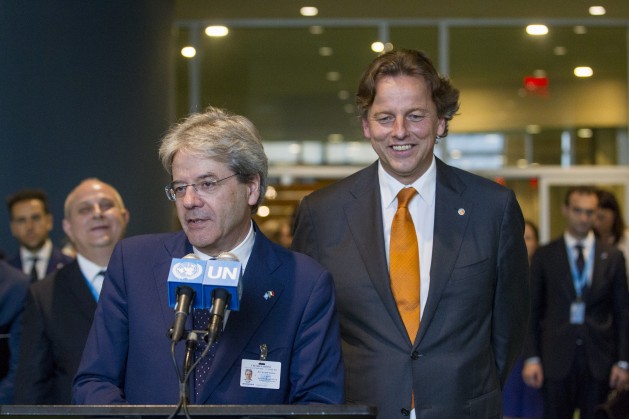 Italy and the Netherlands have taken the unusual step of splitting the term of a UN Security Council seat. UN Photo/JC McIlwaine.

UNITED NATIONS, Jun 29 2016 (IPS) - Bolivia, Ethiopia, Kazakhstan and Sweden were elected on Tuesday to serve on the UN Security Council (UNSC) as non-permanent members, while Italy and Netherlands have split the remaining contested seat.

As the UN’s most powerful body, the UNSC is responsible for international peace and security matters from imposing sanctions to brokering peace deals to overseeing the world’s 16 peacekeeping missions.

Swedish Foreign Minister Margot Wallstrom expressed how “happy” and “proud” Sweden is to be joining the UN’s top decision-making body.

“We will do now what we promised to do,” she told press. Among its priorities, Sweden has pledged to focus on conflict prevention and resolution.

“With 40 conflict and 11 full-blown wars, it is a very very worrisome world that we have to take into account,” Wallstrom stated.

Despite its location in Northern Europe,  Sweden has not been untouched by recent conflicts, including the ongoing civil war in Syria. With a population of 9.5 million, the Scandinavian country took in over 160,000 asylum seekers in 2015. The government has since imposed tougher restrictions on asylum seekers including a decrease in permanent residence permits and limited family reunification authorisations.

Ethiopia has also highlighted its position in promoting regional and continental peace and security. The country is the largest contributor of UN peacekeepers and is actively involved in mediating conflicts in Africa, most recently in South Sudan. It has also long struggled with its own clashes, including a crackdown on political dissent.

The Sub-Saharan African country has also promised to work towards UNSC reforms.

During the 70th Session of the UNGA in September 2015, Prime Minister Hailemariam Dessalegn remarked that he was “proud” that Ethiopia is one of the UN’s founding members, but stressed the need to reform and establish a permanent seat for Africa in the council.

“Comprehensive reform of the United Nations system, particularly that of the Security Council, is indeed imperative to reflect current geo-political realities and to make the UN more broadly representative, legitimate and effective,” he told delegates.

“We seize this occasion to, once again, echo Africa’s call to be fully represented in all the decision-making organs of the UN, particularly in the Security Council,” Dessalegn continued.

It will also be the third time that Bolivia will have a non-permanent SC seat. Bolivia campaigned unopposed with the backing of Latin American and Caribbean countries.

“Bolivia is a country that has basic principles…one of those principles is, without a doubt, anti-imperialism,” the Bolivian delegation said following their election, adding that they will continue implementing these principles as a member of the UNSC.

Since the election of Evo Morales, its first indigenous leader, the South American country has largely focused on social reforms and indigenous rights. Most recently, Morales has been reportedly implicated in a political scandal that is threatening journalists and press freedom.

Kazakhstan became the first Central Asian country to be a member of the UNSC after beating Thailand for the seat.

Kazakh Foreign Minister Erlan Idrissov said that he was “very happy” and their selection was a “privilege.” He also reiterated the country’s priority focus on nuclear disarmament and non-proliferation.

Following the dissolution of the Soviet Union, Kazakhstan relinquished its nuclear weapons and has been actively advocating for non-proliferation around the world.

“We have a lot to offer to the world and we believe that it is time to attract attention to the need of development in our part of the world,” Idrissov stated.

However, Human Rights Watch has scrutinized the Central Asian nation’s human rights record, including restrictions on freedom of expression.

Netherlands and Italy were up for the last Western European seat on the UNSC, but after four rounds of voting, they were deadlocked with each country receiving 95 votes while needing 127 to win.

Following deliberations, Italian and Dutch foreign ministers announced that they would split the seat, with Italy in the UNSC in 2017 and the Netherlands in 2018.

Since May, the six countries have been campaigning for council seats by participating in the first-ever election debates in the UN’s 70-year history.

The debates were a part of a new effort to increase transparency in the institution.

Following their controversial exit from the European Union, known as “Brexit”, the UK may face an uncertain future in the UNSC as the prospects of Scotland and Northern Ireland leaving the UK loom.