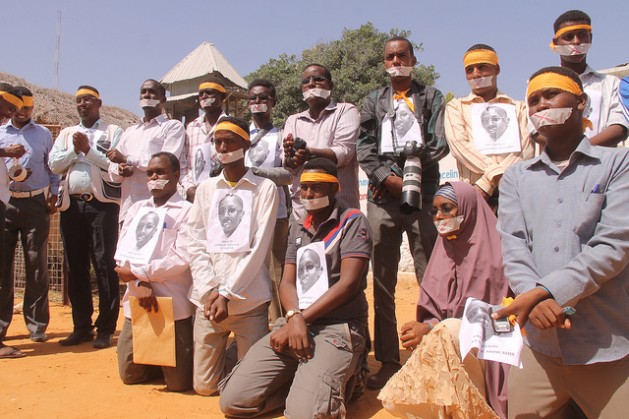 Somali Journalists protesting in 2013 after their colleague Abdiaziz Abdinur Ibrahim was arrested for the story of a woman who alleged that she was gang raped by Somali government forces. Credit: Abdurrahman Warsameh/IPS

Gilkey and Tamanna, who was Gilkey’s interpreter and fixer were killed together in Afghanistan.

“Drivers, fixers, translators, are by definition probably also local journalists. There were cases in Afghanistan and Iraq, where translators were targeted for working with Americans, both journalists and military. That shows how local fixers and local journalists are often at greater risks,” Courtney Radsch, Advocacy Director for the Committee to Protect Journalists (CPJ), told IPS.

“Local journalists are the one who mostly get harassed, killed, or arrested, because they report on local issues around corruptions and politics, which in certain cases is even more dangerous than war. It is much more common for them to become a target.”

“It is less common for a foreign journalist to be arrested,” she added.

"There were cases in Afghanistan and Iraq, where translators were targeted for working with Americans, both journalists and military. That shows how local fixers and local journalists are often at greater risks" -- Courtney Radsch, CPJ.

Sagal Salad Osman, who was killed in the western part of the Somali capital, was a local reporter for state-run Somali National Television and Radio Mogadishu. Like her, in December 2015, another female reporter, Hinda Hagi Mohamed was killed in Mogadishu, presumably by al-Shabaab militants.

Award-winning David Gilkey and his interpreter and reporter, Zabihullah Tamanna, were on an assignment for the U.S. broadcasting network, National Public Radio (NPR), when they were attacked in an apparent ambush while travelling with an Afghan army unit, in the Marjah district, Afghanistan.

CPJ reported that 65 journalists were killed in Somalia since 1992. 59 of them were confirmed to be killed because of their job. Four journalists were still unconfirmed. Two were media workers, such as fixers, translators and drivers. 80 percent of these reporters were locals, and 20 percent internationals.

Regardless of whether international or local media are targeted, it is important to make sure that their deaths are reported widely, says Radsch, since international attention to media deaths can help make journalists safer on the ground.

“Keeping journalists safe, is not just about being an activist about it, but actually covering and making sure that investigations are set up,” she said.

The three journalists killed this week join a long list of reporters who have lost their lives working in countries experiencing political turmoil.

In condemning these attacks, the Director-General of the UN Educational, Scientific and Cultural Organization (UNESCO), Irina Bokova, said:

“The right of media workers to exercise their professional duties in safe conditions must be recognised in the interest of society as a whole.”

Since the adoption of Resolution 29 in 1997, UNESCO has been on the front lines for the protection of the right of freedom of expression, and the right to receive information.

Sylvie Coudray, UNESCO Chief Section of Freedom of Expression told IPS that in 2012, UNESCO took responsibility for the UN Plan of Action on the Safety of Journalists and the Issue of Impunity, which aims to create a free and safe environment for journalists and media workers, increasing recognition of the need to address journalist safety and impunity for crimes against journalists.

“It is the first systematic UN-wide plan that brings every relevant actor to the table in a universal concerted effort, including UN agencies, national governments, academia, civil society, and media outlets and institutions,” said Coudray.

Despite the significant progress that has been made by the UN – remarked Coudray – also with the adoption of the U.N. Security Council resolution 2222, which condemns all forms of violence against journalists, there has been, however, an upward trend since 2013 in the number of cases of killings of journalists, which is in part due to various ongoing conflicts around the globe.

“Threats to reporters and media workers remain numerous. From attacks, arbitrary detention, harassment, kidnappings to killing, the ultimate form of censorship,” continued the UNESCO Chief Section of Freedom of Expression.

Coudray continued – “What makes the situation even harder is the prevailing climate of impunity with more than nine out of ten cases of journalists’ killings remaining unresolved, (this) also fuels a cycle of violence against the media.”

According to CPJ, in 2016, 13 journalists – plus another ten who were classified as unconfirmed – were killed in the eight deadliest countries, among whom Afghanistan was ranked number four (1.Yemen 2.India 3.Iraq, 4.Afghanistan, 5.Mexico, 6.Guinea, 7.Syria, 8.Turkey).

In 2015, 73 reporters – plus two media workers and 25 unconfirmed journalists – were killed in the deadliest countries, among which Somalia was ranked number nine. In both years, over 80 percent of the reporters killed were locals.