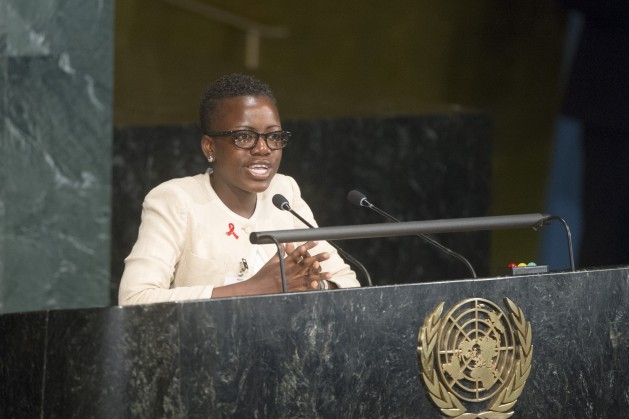 Loyce Maturu, a Zimbabwean living with AIDS since the age of 12 and an advocate for people living with HIV/AIDS, addresses the General Assembly High-level Meeting on HIV/AIDS. UN Photo/Rick Bajornas

UNITED NATIONS, Jun 10 2016 (IPS) - Young people are disproportionately affected by HIV, yet their concerns about sexual education, and discrimination of key populations were ignored at the UN General Assembly High Level Meeting on ending AIDS.

Young people’s vulnerability to HIV is exacerbated by a lack of access to comprehensive sexual and reproductive health information and services and by exclusion from decision making processes.

At the UN General Assembly High Level Meeting on ending AIDS this week, Member States adopted a new political declatarion focusing on the Fast-Track approach to fighting HIV and ending AIDS by 2030. Fast-Track is driven by the 90–90–90 targets: that by 2020, 90% of people living with HIV know their HIV status, 90% of people who know their status are receiving treatment and 90% of people on HIV treatment have a suppressed viral load so their immune system remains strong and the likelihood of their infection being passed on is greatly reduced.

“Sexual education is the direct link between HIV AIDS and sexual health and reproductive rights. The sooner we realize this, the sooner we will achieve an HIV free generation."

But youth delegates say that issues of stigma, discrimination, and sexual education were not given the importance they should have in the declaration since youth were not included in the negotiations.

“The concept of 90-90-90 is amazing, but in practice without access to sexual education or participation of key populations and young people, the goals are unrealistic,” said Peter Mladenov, one youth representative from Youth Peer Educational Network.

At the High Level Meeting on Ending Aids, there were 20 young people representing different organisations.

“Unfortunately, all youth representatives were excluded from the negotiations on the high level meeting on Aids political declaration,” said Mladenov.

“Our wishes were not heard and the rights were not promoted since in the final document we did not see any sexuality education, or mentioning of key populations.”

Mladenov is an expert on youth policies and has been a youth advocate for Sexual and Reproductive Rights  and Comprehensive Sexual Education for the past 10 years. At the age of 14, he was invited to join a class on sexual education in school which he says changed his life and began his journey with sexual health and reproductive rights advocacy.

“Sexual education is the direct link between HIV / AIDS and sexual health and reproductive rights. The sooner we realize this, the sooner we will achieve an HIV free generation.”

“Sex ed is not only about the sex, it is about the informed choice of each young person, understanding the changes in your body, a young girl having the right to say no to marriage at age 15, an instrument to prevent child abuse or female genital mutilation.”

“It is nice that we are progressing, same-sex marriage is approved in different countries and shows that the world is changing for the better. But there is still a long way to go, people with HIV still experience stigma and discrimination on a daily basis. When someone discriminates against a person it is usually because they are afraid of something, which is why sexual education is so important.”

Another youth leader attending the meeting was Annah Sango from the HIV Young Leaders Fund Board:

“Sexual rights really are human rights, because when it comes to talking about my body and my health and well being, it is not an issue of a statistic, but what I live each and every day,” said Sango.

“It is every young person’s need and right to be in your own country, and be able to know you have access to health and to know that the justice system is working for you, not against you.”

Sango grew up seeing how disadvantaged young people are, and how sometimes culture, society and tradition play a very crucial role in the lives of young people as much as the economic aspects. When asked what she would have wanted in the declaration, she said it was important to ensure that countries aren’t allowed to hide behind culture and religion, and rather have an open mind to the issues in their countries. She also said that member states should have given clear-cut strategies to address some of the pertinent issues facing young people.

Sango is also Advocacy Officer for the African Network of Young People living with HIV (AY+) which heavily advocates for Comprehensive Sexual Education and supports young people to dispel disinformation which drive stigma and discrimination.

“We cannot talk about AIDS whilst excluding young people and key populations. At country level, the agreement needs to reflect the face of HIV: young people that face violence, the millions of young people that have died because of their sexuality, the reality of teenage pregnancies, and of adolescents who are dying because they cannot be identified.”

Sango also said the negotiations for the declaration were very exclusive of youth voices, however she is optimistic that in the future youth will be included at the national level.

“I am confident that whatever goals, whatever agendas we are working towards, we will be able to achieve them if we include the right people to lead and champion the agenda,” said Sango.

Mladenov was also optimistic that about young people’s participation.

“Many people say that young people are the future, but that is not correct – we are the present, and we should be the ones who drive the sustainable development agenda to its accomplishment.” Mladenov told IPS.

“Although we don’t have what we want in the political declaration, we have the will, the power, and motivation to do it. The youth working on the local and national level should not be afraid to take up the floor, to go to their ministries, to demand that they involve youth as equal partners in implementing the declaration.”

“We should not forget that these people were elected by us, they are accountable to us, not vice-versa. If we have more governments really involving young people, we can achieve sustainable development.”

“Young people should be the agents of change, they should be the ones who push their governments to do something for them because they already agreed to with this declaration.”

“I dream for a day when I will not hear about a person coming from an LGBT community who is harassed, or a young woman or girl who is somehow violated, or a young person is excluded.”

“In many countries where MSF works, young people, especially adolescent girls and young women, are most at risk of contracting HIV,” said Lynch. “For example, in Lesotho, the prevalence of HIV will multiply by 5 in the next 7 years among adolescent girls from the age of 15 to 22. So the question for the region is what can we put in place as soon as possible to provide life-saving treatment as well as prevention.” Lynch told IPS.

“Youth are critical to combat stigma by creating more visibility. Young people can combat stigma by being out about their HIV status, demanding not only a voice but also acceptance in their communities. But governments need to make sure they take steps to reduce stigma and discrimination as well.”