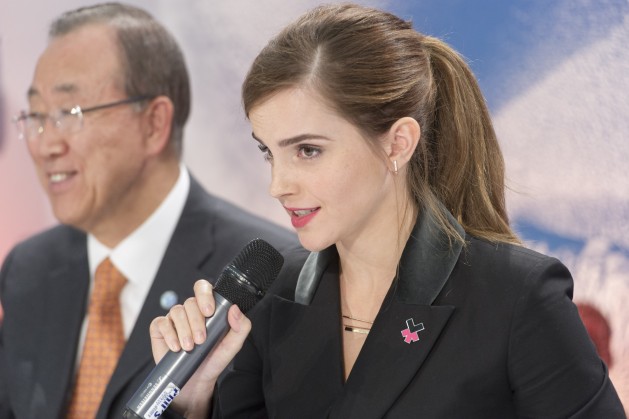 UNITED NATIONS, Jul 21 2016 (IPS) - Achieving gender equality has long been one of the United Nations’ top priorities yet the word feminism has only recently begun to find its way into speeches at UN headquarters.

Croatia’s Vesna Pusic, one of 12 candidates for the post of UN Secretary-General, explained why she thought her feminism made her suitable for the UN’s top job, during a globally televised debate, on 12 July.

Pusic joins other high profile feminists at the UN including British actor Emma Watson, whose September 2014 speech about her own feminism gained worldwide media attention.

More recently, Canadian Prime Minister Justin Trudeau told UN Women’s Executive Director Phumzile Mlambo-Ngcuka at a UN meeting in March 2016 that there shouldn’t be such a big reaction every time he uses the word feminist.

“For me, it’s just really obvious. We should be standing up for women’s rights and trying to create more equal societies,” he said.

Perhaps more significant though than these speeches is Sweden’s recent election to the UN Security Council on a feminist foreign policy platform.

“I decided that I was a feminist, and this seemed uncomplicated to me. But my recent research has shown me that feminism has become an unpopular word. Women are choosing not to identify as feminists.” -- Emma Watson

Sweden will join the 15-member council for two years in January 2017, the same month that the new Secretary-General will take office. There are hopes that the UN’s ninth Secretary-General, will be the first woman to lead the organisation, with women making up half of the 12 candidates currently under consideration.

“There could be a lot of elements coming together to finally create some momentum for progress,” Jessica Neuwirth, one of the founders and Honorary President of Equality Now told IPS.

Even the number of female candidates running represents a change for the UN, Natalie Samarasinghe, Executive Director of the United Nations Association UK told IPS.

“Not only has no woman ever held the UN’s top job, but just three of 31 formal candidates in previous appointments have been female.”

The push to select a female Secretary-General has seen all candidates, both male and female, eager to show their commitment to gender equality.

Whoever is selected will be continuing on work already started by current Secretary-General Ban Ki-moon, said Neuwirth, who believes that Ban has shown a commitment to gender equality at the UN, even if he may not use the word feminist to describe himself.

“I’m not a person who really lives or dies on the words, I think what people do is really much more important than what they call themselves,” said Neuwirth, who is the director of Donor Direct Action, founded to raise funds for frontline women’s groups.

“I don’t know that I’ve ever heard (Ban) use the word feminist, definitely not to describe himself,” she added. “On the other hand as somebody who had the privilege of working at the UN during his tenure I did see first hand the efforts he made to increase the representation of women at the UN at the highest levels, he made a very conscious effort to increase those numbers.”

“It’s still not 50:50 and it’s even slid backwards which is disappointing, but he showed that one person can make a big difference.”

Samarasinghe also noted that even if the word feminist is not explicitly used at the UN, its meaning is reflected in the UN’s many objectives for achieving gender equality.

“Feminism is about women and men having equal opportunities and rights – something reaffirmed countless times in UN documents, from the Universal Declaration of Human Rights onwards.”

However Samarasinghe noted that the word feminist remains controversial. The UN’s 193 member states include many countries which lag far behind outliers such as Sweden and Canada on gender equality.

“Being a feminist is a complete no-brainer. It’s like having to explain to people that you’re not racist. But clearly the word is still controversial so we have to keep using it until people get it,” she said.

Emma Watson noted in her high profile UN speech, that the word feminist is not as easy to use as it should be.

“I decided that I was a feminist, and this seemed uncomplicated to me. But my recent research has shown me that feminism has become an unpopular word. Women are choosing not to identify as feminists.”

“Apparently, I’m among the ranks of women whose expressions are seen as too strong, too aggressive, isolating, and anti-men. Unattractive, even,” said Watson.

In late 2015, some media reported that Watson had said she had been advised not to use the word feminist in her speech.

Neuwirth who was present when Watson made her speech told IPS that Watson’s choice of words ultimately had a strong impact.

“That was an incredible event, I mean the level of emotion in that room was so high it was kind of shocking to me.”

“There were so many diplomats there, which was a good thing, and it was just really a powerful speech that she made, and it moved them, you could just see visibly that it moved them,” said Neuwirth.

However since Watson’s speech, progress on gender equality at the UN has not always been easy.

Media organisation PassBlue, which monitors gender equality at the UN, has noted that the number of women appointed to senior UN positions has been slipping.

When Sweden takes up its position on the Security Council, it will have big strides to make on both improving women’s representation in decision making positions at the UN and enacting policies which promote gender equality more broadly.

In fact, it is anticipated that all 15 permanent representatives on the UN Security Council in 2017 will be men, unless the United States chooses a woman to replace Samantha Power, who is expected to leave her post by the end of 2016.

Sweden hopes to use its seat on the Security Council to increase women’s involvement in negotiating and mediating peace agreements, Sweden’s Foreign Minister Margot Wallstrom said at a media briefing hosted by Donor Direct Action on 30 June.

Neuwirth welcomed Wallstrom’s comments, noting that in Syria, for example, women continue to be shut out of peace negotiations.

Syrian women “are trying to play a meaningful role in the negotiations over Syria, which are totally a mess,” she said, “yet these women really just are struggling so hard to get even inside a corridor let alone to the table.”

“Why wouldn’t they just give these women a little more of a chance to see if they could do better, because it would be hard to do worse?”