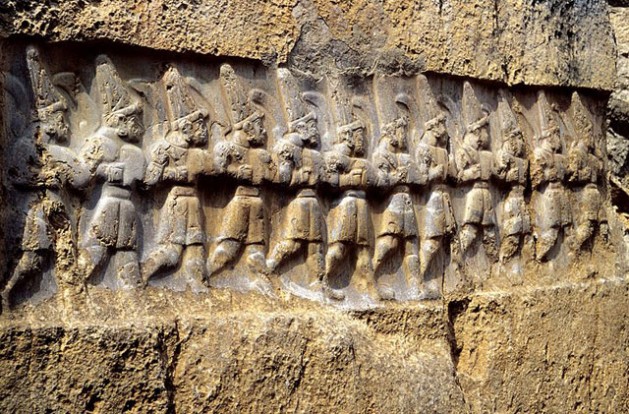 The Yazılıkaya sanctuary in Turkey, with the twelve gods of the underworld. Credit: Klaus-Peter Simon. Creative Commons Attribution 3.0 Unported license.

DAYLESFORD, Australia, Jul 27 2016 (IPS) - Two of the drivers of world affairs that manifest in the daily decisions that affect our lives are ideology and religion.

Ideology is the term widely used to describe the underlying set of values, myths, ideas, attitudes, beliefs and doctrine that shape the behavioural approach to political, economic, social, cultural and/or ecological activities of an individual or organisation.

Religion usually describes the belief in a superhuman controlling power involving a God or gods; it entails a system of faith and worship as well as, like ideology, an underlying set of values, myths, ideas, attitudes, beliefs and doctrine that shape the behavioural approach to political, economic, social, cultural and/or ecological activities of an individual or organisation.

At the macro level, there are worldwide or regional ideologies such as capitalism, fascism, conservatism, communism, socialism, feminism, pacifism and environmentalism as well as religions including Buddhism, Christianity, Hinduism, Islam and Judaism.

There are also variations of these major ideologies and religions. But even at the micro level, the local service club, neighbourhood charity and sporting club operates in accordance with an ideology or religion that is shared by its members too.

Unfortunately, however, often enough the shared ideology or religion has a dysfunctional basis and the outcome is detrimental both individually and socially with the (violent) consequences sometimes reverberating throughout a national or even global society.

This is why it is useful to understand the psychology of ideology and religion.

When a child is very young, they start to learn from the people around them. Predominantly, they learn by being participants, one way or another, in the events in which they are involved. That is, when their parents, other significant adults (such as relatives, school teachers and religious figures) or an older sibling involve the child in an activity, the child is taught and copies the mental responses and behaviours of those around them. This is what is called ‘socialization’.

However, it is important to identify the ideological/religious elements in this process too. First, there are ideological and religious imperatives around raising children.

These imperatives are sometimes deliberately shaped by an ideology or a religion but, often enough, they are simply copied on the advice of, or by observing the behaviour of, other nearby adults.

Second, and more importantly however, the child unconsciously acquires a set of values, myths, ideas, attitudes, beliefs and doctrine (in relation to social, cultural, political, economic, religious, sporting and ecological issues) that are approved by the adults in the child’s life.

There is much that is functional about this process and, historically, it can explain a great deal about human behavior, including in particular cultural contexts.

But I would like to discuss the dysfunctional aspects of this process which arise from the way in which the child’s fear is deliberately played upon so that, consciously or unconsciously, they copy the ideology or religion of the adults around them.

And the reason that the child does this is so that the ideology or religion that they acquire, together with the behavioural outcomes that arise from this, does not scare these same adults.

In an ideal world, a child would be socialised in an environment devoid of fear and in which they are loved, there is no ‘visible’, ‘invisible’ or ‘utterly invisible’ violence – see ‘Why Violence?‘ – damaging them in any way, they have their needs met and they are utterly free to choose (and later change if they wish) the values, myths, ideas, attitudes, beliefs and doctrine by which they will live their life, preferably with the benefit of substantial aware listening from adults while they work this out for themselves. Needless to say, this never happens.

In fact, the typical child is endlessly terrorised into adopting some version of the individual ideologies and religions, which are sometimes bizarrely conflicting, of the people around them.

This means that a fixed set of values, myths, ideas, attitudes, beliefs and doctrine – including those in relation to violence – become fearfully and unconsciously embedded in the child’s mind and they cease to be values, myths, ideas, attitudes, beliefs and doctrine that are easily and consciously accessible for review and reconsideration in light of new information or evidence. Let me briefly illustrate this point.

For some people, it is easy to laugh at or be outraged by the absurd statements they hear uttered by a very conservative politician, especially if they display a pronounced bias against a particular racial or religious group or a class of people.

But to a conservative, their ideology is imperative and it reflects a childhood of being terrorised into believing certain things.

Similarly, most socialists are very attached to the ideology that puts class (based on the production relations of capitalism) predominantly at the centre of their analysis, feminists usually believe that gender relations under patriarchy are the primary problem in society, many people who combat racism view white domination as the core issue in social oppression, and religious fundamentalists believe that they know the one truth to the exclusion of people of other faiths.

Irrespective of the proclaimed original basis of the ideology or religion, often enough, at least some of its adherents also learn to believe that violence is the appropriate behaviour for achieving some or all of their aims.

The issue in this context, however, is not whether any of these people is right or wrong but why they hold so tenaciously to a worldview that they do not willingly and fearlessly subject to ongoing scrutiny. And that is why the psychology of ideology and religion is so important.

If any person is willing to fearlessly and open-mindedly consider other worldviews and analyses of society’s social relationships and problems, as well as how to tackle these problems, then it is likely that their ideology or religion is one that has been genuinely and intelligently acquired of their own free will and their mind will be capable of analysis and reconsideration if compelling evidence of the merits of an alternative worldview or explanation is made available.

They are also likely to be highly tolerant of other worldviews as some religions, for example, specifically teach.

But if someone, whatever their ideology or religion, is dogmatically insistent on their own worldview, then their fear of further analysis and reconsideration will be readily apparent and it is a straightforward conclusion that they were terrorised out of the capacity to think fearlessly for themselves when they were a child. They are also more likely to behave violently.

If you would like to read a detailed explanation of how a child is terrorised, to a greater or lesser extent, into unconsciously absorbing a version of the ideologies and/or religions of the adults around them, you can do so in ‘Why Violence?‘ and ‘Fearless Psychology and Fearful Psychology: Principles and Practice.’

These documents explain the visible, invisible and utterly invisible violence to which children are subjected throughout childhood and which few survive. Moreover, it is this adult violence against children that leads to all other manifestations of violence.

Now, you might well ask: Is this simply my ideology? Well perhaps it is. But five decades of research, which included substantial reading and thoughtful consideration of many ideologies and religions, led me to this conclusion.

Nevertheless, I remain happy to review my beliefs in this matter if someone offers me compelling evidence in support of another explanation.

If you would like to work towards creating a world in which fear does not shape every single outcome of human endeavour, you might like to sign the online pledge of ‘The People’s Charter to Create a Nonviolent World‘.

In essence, most children are terrorised into believing what the adults around them want them to think. This is because most adults are far too (unconsciously) frightened to let children think for themselves and to then let them believe and behave as they choose.

Consequently, therefore, it is fear, often mediated through ideology and religion, that drives most human behaviour.