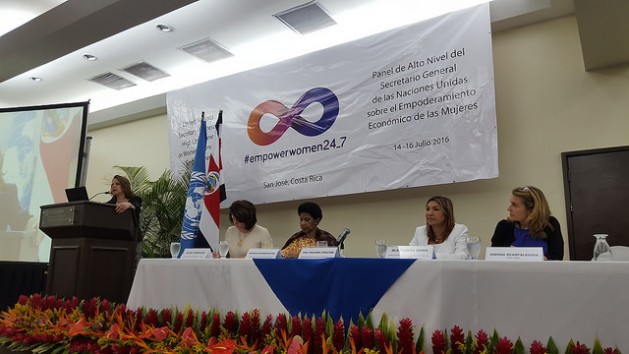 On the table, from left to right, Luiza Carvalho, Regional Director of UN Women for the Americas and the Caribbean; the Executive Director of UN Women Phumzile Mlambo-Ngcuka; the Costa Rican Minister for Women, Alejandra Mora and Simona Scarpaleggia, CEO of IKEA Switzerland and co-chair of the UN High-Level Panel on Women’s Economic Empowerment. Credit: Diego Arguedas Ortiz/IPS

SAN JOSE, Jul 15 2016 (IPS) - Latin America’s inclusion of women in its development model, with greater participation within the work force and improved wage conditions, was a decisive factor in the region’s successful diminishment of extreme poverty.

This issue also offers a road map to pursue the elimination of further gender gaps in both Latin America and the world.

Those were among the ideas debated at the second meeting of the UN High-Level Panel on Women’s Economic Empowerment, which gathered leaders from around the world in Costa Rica’s capital on July 13-15 to exchange positive experiences on women’s economic independence.

“Hadn’t women’s conditions been improved since the 1990, extreme poverty in Latin America would be closer to 30 percent of the population and not the current 12 per cent”, said Luiza Carvalho, Regional Director of UN Women for the Americas and the Caribbean.

Carvalho referred to regional indicators on economic empowerment, such as higher rates of labor force participation for women, which increased from 40 to 55 per cent between 1990 and 2013, the largest improvement of all regions.

This figure brings hope to face the other pending regional gender gaps.

“This progress is merely a starting point from where we shall improve. We’re far from out landing point”, stated the Brazilian regional director.

The second meeting of the High-Level Panel, a forum convened last March by UN Secretary General Ban Ki-moon, put the spotlight on Latin America although the panel’s reach was global.

The panel is composed by high-level leaders from governments, private sector, academia and civil society and it’s co-chaired by Simona Scarpaleggia, CEO of IKEA Switzerland, and Luis Guillermo Solis, President of Costa Rica. Their recommendations shall be delivered to Ban later this year.

Globally, women earn on average 24 per cent less than men, do nearly two and a half times more unpaid care and domestic work than men and are over-represented in clerical and support positions (63 per cent) compared to managerial occupations (33 per cent).

During the Panel, the Executive Director of UN Women Phumzile Mlambo-Ngcuka asked that women themselves be the ones signaling which areas of the economy impact them the most and where do they feel constrained to participate.

“Let it be women will tell us how and where they think governments should make it easier for them”, said South-African, who also serves as United Nations Under-Secretary-General.

Despite these small victories in women participation, the Latin American region still has “its fair share of challenges”, she said.

“We can learn from both challenges and successes”, insisted Mlambo-Ngcuka.

Economic empowerment is a pre-requisite to achieve true global gender equality and the persistent gaps in labor force participation, equal wages and salary for equal tasks hinder this progress, states the Panel members.

However, the mechanism to achieve such goal are still far from those needed, thus the need to create the High-Level Panel, explained Scarpaleggia, the CEO of IKEA Switzerland.

“The pace to reach 2030 is far too slow, so we need to accelerate and take actions”, she claimed. “If we keep the same pace, it will take 100 years”, added the high executive of IKEA, a multinational group of companies that designs and sells ready-to-assemble furniture, appliances and home accessories.

For the Italian panel co-chair, there are more than enough economic arguments to include more women and reach 50-50 parity.

“Companies can do a lot: IKEA, for instance, has a goal to reach 50-50 gender balance on leadership positions by 2020. We have already reached that in IKEA Switzerland”, Scarpaleggia added.

A 2015 study by McKinsey, a consulting firm, stated that further increases in labor force participation for women can annually increase the global gross domestic product (GDP) between 12 and 26 percent by 2025. This means an additional $12 to $28 trillion.

The wide range of this increase is explained by the two paths forward detailed in the report: the lesser improvement would occur if all countries match the rate of improvement of the fastest-improving country in their region, while the higher represents a “full potential” scenario in which women play an identical role in labor markets to that of men.

“Beyond the discussion of economic stagnation, our economies have an inclusion problem. This means that our countries are wasting about 50 percent of women’s talent,” claimed Costa Rican Minister for Women, Alejandra Mora.

Mora explained that an economic empowerment immediately impacts other areas of women’s life, which gives it a strategic significance.

“A woman with financial capital which covers her basic needs can end abusive aggression and can retake control of her body”, the Costa Rican stated.

In Latin America, 29 percent of women lacked access to personal income in 2013, compared to 13 percent of men.

The specialists were adamant that employment on its own doesn’t suffice, but needs to be quality labor properly waged.  Of jobs taken by Latin American women, 59 per cent  are classified as informal employment, without legislation or social security.

A key field to improve this is waged domestic work, which represents 17 percent of the regions women labor.

Out of 22 countries that have ratified the International Labour Organization Convention 189, which regulates the rights of domestic workers, 12 are Latin American.