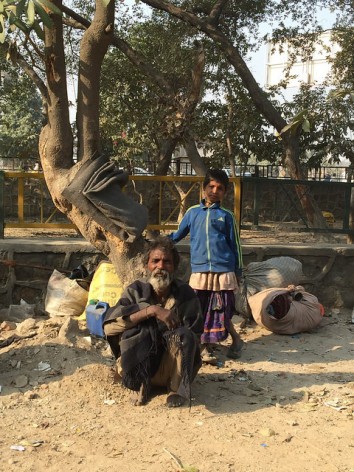 Beggars are often rounded up by police and thrown into jail without charges being filed against them for years. This adds to the overcrowding in Indian prisons already reeling under a lack of basic facilities. Credit: Neeta Lal/IPS

The program – “Fear and Loathing in Tihar” — beamed into people’s homes the prisoners’ abysmal treatment by the administration: 600 of them packed like sardines into space meant for half that number, a lack of basic amenities, and a shocking state apathy towards detainees in the world’s largest democracy.

"Some [women inmates] even have kids who have to stay with them in those pathetic conditions till they are six years old." --Delhi-based human rights lawyer Maninder Singh

By highlighting the prisoners’ misery, the program also helped shine a light on a broken judicial system where thousands are subjected to prolonged periods of incarceration without ever seeing a judge, or whose perfunctory court appearances stretch for years thanks to a corrupt legal system clogged with too many cases, and too few judges to try them. The injustice of lengthy detention is compounded by the horrific conditions of the jail facilities.

As the world celebrates Prisoners Justice Day on Aug. 10, human rights advocates say the state of Indian detention centres needs to come into focus again. Most Indian jails fail to meet the minimum United Nations standards for such facilities, including inadequate amounts of food, poor nutrition, and unsanitary conditions. Torture and other forms of ill-treatment are also common. The cells are also often dilapidated, with poor ventilation and absence of natural light.

According to a 2015 report of the Comptroller and Auditor General (CAG) of India on Tihar Jail, the prison complex is reeling under a prisoner population more than double its sanctioned strength and understaffed by 50 per cent of its required workforce. The key findings of the report suggest that the 10 jails in Tihar were grossly overcrowded with 14,209 prisoners against a capacity of 6,250.

Moreover, against government rules, 51 prisoners awaiting trial were found to have already served more than half the maximum term of punishment for the offences they were booked under, the report says.

Medical facilities, adds the damning report, are non-existent. There’s paucity of doctors, paramedical, ministerial, factory and Class IV staff by 18 to 63 per cent in the prison which despite an in-house 150-bed hospital and additional dispensaries in each of the 10 jails. The CAG found that “the hospital was not equipped to face any emergency situation”.

The subhuman conditions take a toll on human health — both mental and physical, a former inmate told IPS. “Women prisoners prefer to take care of each other when they are indisposed as there are only male doctors doing rounds most of the time,” she said. “I remember once a young woman had a miscarriage and bled for a few hours before she was taken to the hospital.” 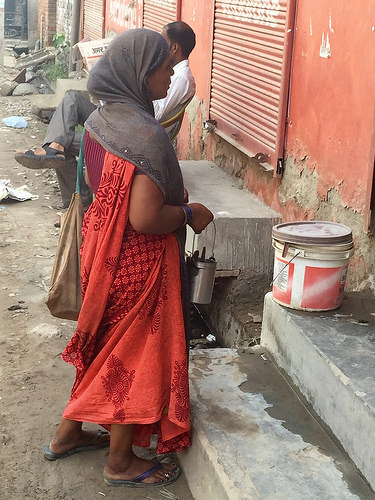 In India, a country where U.N. figures indicate that 270 million people – or 21.9 percent of the population – live below the poverty line, justice for the poor is often delayed as well as denied. Credit: Neeta Lal/IPS

The fate of prisoners on death row is worse. Not only do they inhabit inhumane living conditions, they face unfair trials and horrific acts of police torture, according to a study by the Death Penalty Research Project at the National Law University in Delhi. The study, based on interviews with 373 of the 385 inmates believed to be on death row in India, offers a harrowing insight into the unbearable conditions the prisoners have to live in as they wait for judges to decide their fate.

The Commonwealth Human Rights Initiative (CHRI) report 2015 says that poor budget allocation, the way accused are arrested and non-issuance of bail along with miserable conditions in prisons were leading factors attributed to the existing living conditions of the inmates. It added that the situation calls for a trained administration to bring reformation in prisoners’ lives.

Legal eagles say the biggest bottleneck is the country’s overburdened criminal justice system which has a cascading effect on prisoners’ lives. Overcrowding is the most common. According to National Crime Records Bureau (NCRB) records, in 2013, the total number of prisoners was 411,992, of which a startling 278,503 were prisoners awaiting trial. Delay in providing justice, inadequate court infrastructure, and inaccessibility of a large number of prisoners to legal help make matters worse.

As per records, currently over three million cases are pending in various Indian courts across the country. Erstwhile PM Manmohan Singh remarked that India had the world’s largest backlog of court cases. Bloomberg Business Week estimates if that all the Indian judges attacked their backlog without breaks for eating and sleeping, and closed 100 cases every hour, it would take more than 35 years to catch up.

“The severe delay in delivering justice is largely due to the fact that many courts share judges with each other, resulting in extremely slow trial procedures. There’s no effective legal redress mechanism for under trials,” explains Ajay Verma, Senior Fellow, International Bridges to Justice, a non-profit that supports justice and human rights. “These institutional pathologies result in unjust and prolonged detention.”

Delhi-based human rights lawyer Maninder Singh says that many detainees are forced to be in jail longer than the maximum sentence for the offense with which they were charged, with some people spending as long as two decades in detention before being convicted or released by the courts.

Women awaiting trial in particular, adds Singh, are made to suffer as they are too poor to afford justice. “Some even have kids who have to stay with them in those pathetic conditions till they are six years old. Many under trials languish for months without even charges being framed against them. There’s simply no legal recourse available to them.”

After studying the living conditions of jail inmates across India, the National Human Rights Commission (NHRC) made some key recommendations for prison reform. These include replacing the 1894 Prison Act with a new one, amending prison manuals keeping human rights in mind, reducing overcrowding, one of the biggest problems in most prisons, shifting foreign nationals to detention centres from prisons after their sentence is completed, till they are deported to their respective countries.

Despite the gloom, experts suggest that it’s not as if the situation is irretrievable. What is needed is political will and a more humanitarian approach to a very complex problem. Already, some measures in Indian jails — like rehabilitation and skilling prisoners for their gainful employment post jail term — have come in for accolades. Tihar boasts of a full-fledged cottage industry where training for carpentry, baking, tailoring, fabric painting and other crafts are imparted to empower inmates. The revenues generated from selling products made by the prisoners helps in the prison’s upkeep. Wage earning and gratuity schemes and incentives help reduce the psychological burden on the convicts.

But as Singh and Verma point out, while these measures should be amplified, the State needs to urgently focus on faster disposal of court cases, speedier justice and better conditions in jail to make life more bearable for the inmates.