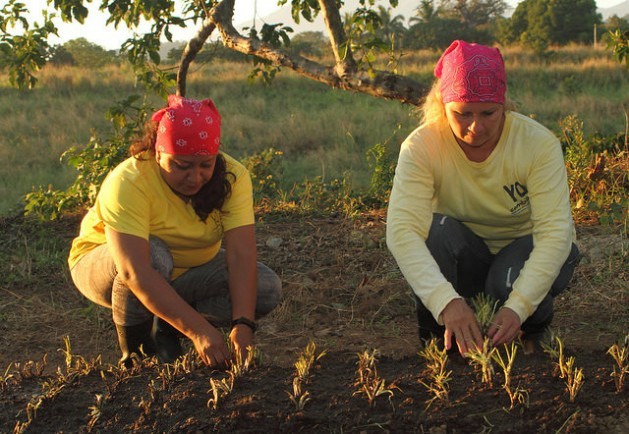 Jannete Salvador and Doris Zabala plant chives on the Izalco prison farm for women in the western Salvadoran department of Sonsonate. The government is extending the use of farm work and other activities in prisons to keep inmates active and productive. Credit: Edgardo Ayala/IPS

IZALCO, El Salvador, Dec 29 2015 (IPS) - Doris Zabala squats down in the field to pull up radishes. She is working on a prison farm in El Salvador, where more and more penitentiaries are incorporating agricultural work and other activities to keep prisoners busy.

“The harvest has been good – nice, big red radishes,” Zabala told IPS. She is one of 210 inmates at the Centro Penitenciario para Mujeres Granja Izalco – a prison farm for women in the municipality of Izalco in the western department of Sonsonate.

This facility is only for minimum-security women prisoners who already have weekend leave to visit their families.

Of the 210 prisoners, 80 work in the fields, while the rest are active in other areas, such as cooking in the prison kitchen or taking care of the inmates’ children.

On the 26 hectares of land used by the prison farm, the women use agroecological methods to grow radishes, sesame, tomatoes, corn, papaya and other fruit and vegetables. A small chicken farm has also begun to operate, and a tilapia fish farm is on the cards.

“At my house there is land for growing things, so when I’m free I plan to continue gardening because I like it,” said 32-year-old Cecilia Méndez, who has spent six years in prison. She told IPS she is set to be released in eight months.

The farm was inaugurated in January 2011 as part of the government’s efforts to offer occupational alternatives in the country’s overpopulated prisons, to gradually ease the problems of idle prisoners, overcrowding, violence and crime that have reigned supreme in the penitentiaries for decades.

This Central American country’s 21 prisons were built for a combined total of 8,100 prisoners, but currently hold 32,300 – four times the capacity – according to official figures.

There is an “enormous humanitarian crisis in the penitentiary system” says the report “The Salvadoran Prison System and its Facilities”, published in November this year by the University Institute for Public Opinion (IUDOP) at the catholic José Simeón Cañas Central American University (UCA), under the auspices of the Heinrich Böll Foundation.

The Izalco prison farm is part of the government programme Yo Cambio (I Change), which includes a number of measures aimed at boosting the reintegration of prisoners and reducing recidivism.

The programme offers skills training, activities and work to keep inmates busy and improve their reinsertion into society once they are released. Projects also include rebuilding, enlarging and refurbishing existing prisons and the construction of new facilities, to ease the serious problem of overcrowding.

“Everyone thinks we don’t do anything, that we sit around thinking abut things that we shouldn’t, but we actually keep busy,” said Méndez, walking between rows of chives (Allium schoenoprasum).

The use of environmentally-friendly farming techniques, such as organic fertiliser, is a key part of the process.

“The idea is to teach the inmates new practices,” Óscar Menéndez, the farm administrator, told IPS.

“Anyone who likes to work keeps busy here,” María Cristina Vásquez, 53, who is in charge of the papaya crop and the small chicken coop with 100 chicks that arrived recently, which she cares for with dedication.

The farm’s output is for internal prison consumption and the surplus is sent to other penitentiaries.

On Dec. 22, the government signed a 4.2 million dollar contract with a construction company to refurbish the facilities in Izalco, to improve conditions.

A similar prison farm is located outside the city of Santa Ana in the department of the same name in western El Salvador.

The programme is not limited to farms but also includes other employment activities, in other prisons, such as carpentry and shoe production and repair.

In the Centro Penal Apanteos prison, 72 km west of San Salvador, also in the department of Santa Ana, the inmates set up a novel laboratory where they produce 60,000 tilapia fish in the larval stage per month.

They also created a factory that produces bleach and disinfectant, based on the expertise passed along by a former prisoner.

“He knew how to do this, and our motto here is that whoever knows something teaches it to others who don’t know,” said Rolando Artiaga, 24, who is in charge of running the small factory. They produce 200 gallons of disinfectant and 150 gallons of bleach a month, which are sold inside the prison itself.

But not all the inmates have access to these benefits.

Of the 32,300 prisoners in the country, only one-third benefit from the project, in 12 prisons around the country, Orlando Elías Molina, assistant director of the government’s prison administration agency, the DGCP, told IPS.

In the biggest prison, La Esperanza, to the north of San Salvador, the authorities tried to launch some of the activities used by the programme, in mid-2015, but the efforts were frustrated because of the gangs that control the prison, he added.

“If we let the criminal structures run this, it’s not going to work,” Molina said.

Next year, he added, they will try to get activities going even in those prisons that specifically hold gang members, such as the one in Chalatenango, in the north of the country, which houses members of the Mara Salvatrucha gang. It is one of the most violent gangs along with Barrio 18.