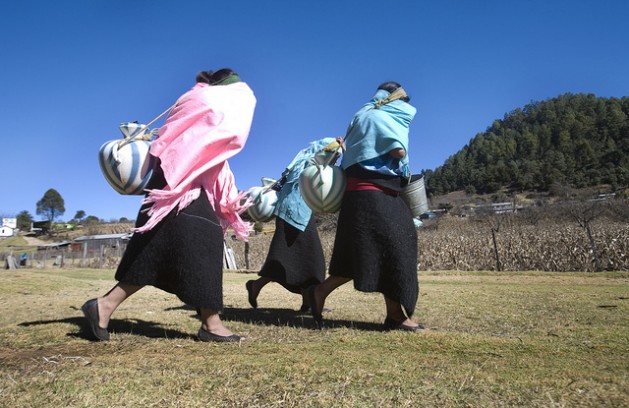 Oaxaca, MEXICO / UNITED NATIONS, Aug 8 2016 (IPS) - Indigenous peoples around the world continue to struggle for self-determination over their education, as highlighted by recent protests against proposed education reforms in Oaxaca, Mexico, which have left at least six people dead.

“For indigenous peoples, these educational reforms impose hostile cultural practices that put individuality at the centre – not cooperation, not teamwork, they do not put the common good over personal achievement,” René González Pizarro, a teacher and member of the Sindicato Nacional de Trabajadores de la Educación (SNTE), from an indigenous Mixe background in the state of Oaxaca told IPS.

“The reforms do not take into account the general public – they follow the logic of markets,” added Pizarro.

Teachers across Mexico, especially in the southern states – with some of the highest levels of poverty and largest indigenous populations – have been protesting educational reforms proposed by President Enrique Peña Nieto.

Nieto’s reforms continue a pattern of laws and policies aimed at eliminating unions, including teachers unions. Nieto also proposes to bring in standardised testing which teachers fear will disadvantage indigenous and other marginalised students.

“Education systems have to change, first and foremost to empower indigenous cultures and identities – and to generate peaceful intercultural processes later,” Álvaro Esteban Pop Ac, Chair of the Permanent Forum on Indigenous Issues at the UN told IPS.

“Nobody talks of the 43 as indigenous… but as a ‘normalistas’ or simply as ‘students’. There is talk of Nochixtlán as an educational struggle, which invisibilises the support of the Mixtec and Triqui people who were there." -- René González Pizarro.

Beginning to view integration from the opposite perspective is, he says, “the big challenge. There’s talk of intercultural exchange from mestizos [mixed race people] and whites to indigenous people, but not vice versa.

Oaxaca is the second poorest state in Mexico after Chiapas, and arguably has the highest proportion (65.73%) and diversity of indigenous inhabitants.

During the first week of June, teachers and their families camped out in tents throughout the city of Oaxaca, filling many tarpaulin-covered streets and its entire central square, or Zócalo.

The atmosphere was tense and resolute, but peaceful, as teachers in their thousands gathered to protest the reforms and organise themselves in the face of proposals which look set to further exclude the country’s poorest and most rurally-dwelling citizens, many of whom are indigenous.

Less than three weeks later, on 19 June, after mounting tensions as roads were blocked protesting the arrest of union leader Rubén Nuñez, violence broke out in the municipality of Nochixtlán between police and protesting teachers. Police killed at least six people and wounded over a hundred more.

“The degree of violence carried out by state and federal police left several dead. Most were Mixtec indigenous populations from around Nochixtlán, and part of the contingent already there supporting the teachers’ resistance, or were people who came to Nochixtlán after hearing of the police raid,” Pizarro told IPS.

Álvaro Pop made a statement at the time of the attacks, condemning them and saying, “any educational reform must consider… ethnic and cultural diversity, as well as the social and economic reality of the country.”

The killings are the latest in a long history of state-perpetrated violence, which has come into renewed focus since 2014, with the enforced disappearances of 43 students from Ayotzinapa Escuela Normal in Iguala, Guerrero, on their way to commemorate 1968’s Tlatelolco massacre of around 300 students.

The school has a history of left-wing activism, and its students, most of whom are indigenous, learn to teach with a focus on interculturalism and bilingualism.

“The worst part is not simply the armed violence, but a politics of silencing,” Pizarro said.

“Nobody talks of the 43 as indigenous… but as a ‘normalistas’ or simply as ‘students’. There is talk of Nochixtlán as an educational struggle, which invisibilises the support of the Mixtec and Triqui people who were there, who turned up to help on the Sunday and organised themselves to speak out about the police’s aggression against the community,” he said.

Alfredo Saynes-Vásquez is an anthropologist from the Universidad Nacional Autonóma de Mexico (UNAM). He is Zapotec, an indigenous group in the Isthmus of Tehuantepec, and speaks the Zapotec language. His work focuses on the effects of globalisation and dominant, urban cultures on traditional ecological knowledge.

Saynes-Vásquez also works with primary and secondary school children, encouraging new generations to learn about their particular environments and history – and the importance of understanding how language “has a political charge. Nobody can avoid this political charge, including in its syntactic usage.” Still, he says, “knowing about your history and locale is not sufficient to defend oneself against the state.”

“There is a process of homogenisation, to make people all the same, have them talk only one language,” Saynes-Vàsquez told IPS. “To know your locality is a form of resistance, which proposes different values from those of the public administration.”

Article 14 of the UN Declaration on the Rights of Indigenous Peoples declares that “indigenous peoples have the right to establish and control their educational systems”. This right is enshrined in a number of human rights instruments, as well as by Mexican protective bodies and under Article 2 of its constitution.

Almost ten years since the UN declaration was first made, it may seem a fragile tool in the face of obstacles apparently insuperable and injustices so deeply ingrained.

“We are at the beginning,” Álvaro Pop says. “We all need to do more, both states themselves and the United Nations system. It’s a short time, from 2007 to today, we are only about to reach ten years. The problems are enormous; the tragedies are immense.”

But, Álvaro Pop counters, “it has the ability to be a tool of empowerment; it has the standing to bring issues to the attention of authorities, and it generates a critical analysis of national legislation and how it might be harmonised within international structures.”

“We need more investment in indigenous territories, providing indigenous people with more freedom and greater ability to decide their destinies.” Finally, says Àlvaro Pop, “we need new ethics in the accumulation of wealth.”