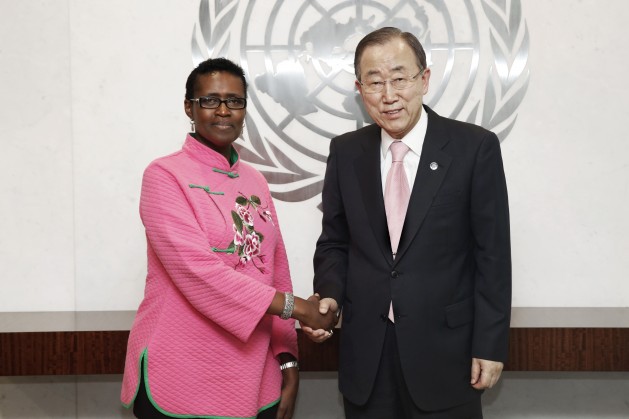 Oxford, UNITED KINGDOM, Aug 3 2016 (IPS) - The process for arguably the top political job on the planet is well underway.  And the time is right for a woman and a feminist to take the helm.

The United Nations (UN) Security Council is continuing its consideration of candidates for the next UN Secretary-General, with the next “straw poll” due to take place on Friday August 5th.

Backed by public debates and online campaigns, this selection process for the Secretary-General has been the most transparent and accessible yet – driven in part by tireless efforts from civil society.

But the decision to appoint essentially rests with the Security Council’s five permanent members in what has been, since 1946, a remarkably secretive selection procedure, one which has given us three Europeans, two Africans, two Asians and one Latin American – all men – in 70 years.

This process has never produced a female secretary general.

In 2006 the Secretary-General selection process included only one woman in seven candidates. This time round, half the current candidates are women. There is no shortage of talent. Yet the initial signs are not promising. The Security Council’s first straw poll on July 21st saw only one woman among the top five.

The absurd male monopoly on the UN’s top job must come to an end. The next Secretary-General must be both a woman and a feminist, with the determination and leadership to promote women’s rights and gender equality.

The long selection process ahead must reverse this. The absurd male monopoly on the UN’s top job must come to an end. The next Secretary-General must be both a woman and a feminist, with the determination and leadership to promote women’s rights and gender equality.

Growing up as an activist under an oppressive dictatorship in Uganda, the UN was a friend to those of us who fought our way to freedom, as it was for the millions that joined decolonization struggles in the African continent. Today, the Sustainable Development Goals (SDGs) and Paris Climate Agreement agreed in 2015 are testament to the UN’s global role and reach, and a legacy of Ban Ki-moon’s outstanding leadership.

Yet the UN is failing to meet its founding tenets to “save succeeding generations from the scourge of war” and uphold human rights for those who are powerless. For the UN’s new leader, reversing this sounds near-impossible amidst protracted conflicts, a lack of respect for international humanitarian law and a massive global displacement crisis.

Fulfilling the pledge to “leave no one behind” is perhaps the biggest political challenge. The new Secretary-General must grapple with the spiralling crisis of extreme economic inequality that keeps people poor, undermines economic growth and threatens the health of democracies. And a low carbon pathway will not happen without strong UN leadership to drive drastic reductions from the richest in our societies, whose lifestyles are responsible for the majority of them.

Choosing a woman goes far beyond symbolism and political correctness. The discrimination of women and girls goes to the core of any and all analyses of the world’s economic, political and environmental problems.

A feminist woman Secretary-General will, by definition and action, ensure gender equality is put at the heart of peace, security and development. In doing so, she will truly champion the UN’s core values of human rights, equality and justice.

Such an appointment – far too long in coming – would fulfil promises given by world leaders 21 years ago at the historic UN Fourth World Conference on Women in Beijing to nominate more women to senior posts in the UN. In the past decade, women have filled less than a quarter of senior roles at the organization, according to UN Women. Shockingly, as recently as last year women made up less than 17 percent of Under- and Assistant Secretary-General appointments.

A new feminist UN Secretary General will ensure that more women serve as heads of UN agencies, peacekeeping missions, diplomatic envoys, and senior mediators who collectively can strengthen the global peace and security agenda. Without women’s equal access to positions of decision-making power and a clear process to get there, gender equality, global security and peace will never be realized.

And it will take a woman feminist Secretary-General to advance the bold, comprehensive women’s human rights agenda in intergovernmental fora that is needed to address the multiple and intertwined challenges facing us in the 21st century. Only a woman feminist Secretary-General can ensure financial support reaches women’s rights movements – proven to have made progress on addressing the challenges of violence against women and girls, climate change, conflict and economic inequality. They can ensure that feminist and civil society movements are not just observers in policymaking, but active and equal participants.

She should, too, boost international efforts to empower women economically – thus strengthening national economies and prosperity for all – and tackling the harmful social norms that trap women in poverty and powerlessness.

The new Secretary-General must also reimagine the role of the UN in a world radically different to the one it was set up to serve and be bold in leading its reform.

The UN must be made more inclusive, accountable, democratic, effective, and reflective of a world in which political and economic power has shifted. And the UN must be able to protect its unique role as a genuinely multilateral institution that acts in the interests of all people and all countries. Integrity must not be undermined by the influence of private sector actors and their money.

The Security Council, particularly the five permanent members, must choose change and progress over continuity. They must have the foresight to ensure they listen to the voices of the public and select the Secretary-General that the world and the UN needs today: a woman and a feminist.