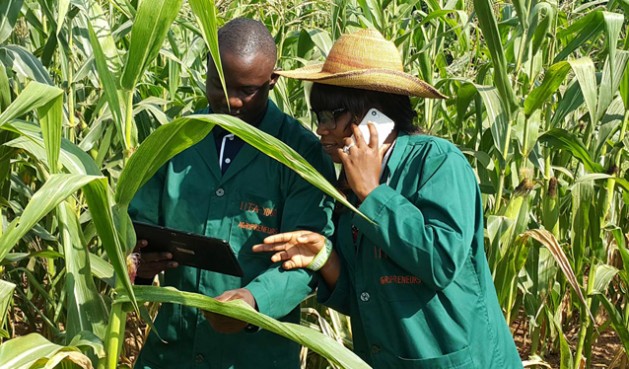 IITA Youth Agripreneurs learning how to work in the field. Credit: IITA

ROME, Sep 27 2016 (IPS) - The African Development Bank (AfDB) together with the International Institute of Tropical Agriculture (IITA) is embarking on the initiative “Jobs for Youth in Africa”, aimed to put an end to youth unemployment in the continent by creating 8 million agribusiness jobs within five years. The president of the AfDB, a former Nigerian minister of agriculture, Akinwumi Adesina visited the Agripreneurs training centre at IITA today, and reiterated his commitment to the initiative.

Under Adesina’s leadership the AfDB has extended support to African youth through the IITA Youth Agripreneurs program that will be scaling up the model of youth engagement in agribusiness. In recognition of his continuous support and commitment to the cause of African youth, IITA will be preserving Adesina’s legacy by naming after him the state-of-the-art youth training centre at IITA headquarters in Ibadan and in Abuja, Nigeria.

The training centres and facilities provided by the AfDB and the IITA will assist African youths to take on work in the agricultural sector. The initiative also seeks to encourage the many unemployed African youths to become involved in agriculture in order to make it a driving force for development in Africa.

Nigeria is not the only African country with high youth unemployment. Youth unemployment in South Africa was estimated at 51.5 percent in 2014; Namibia 40.1 percent; and Algeria 28.4 percent. Three in every five young workers in Sub-Saharan Africa do not have the level of education required for them to compete in the job market.

The AfDB president set forth his five development priorities for the institution when he took office in September 2015. One of these priorities is the ‘Feed Africa’ initiative, an agricultural transformation strategy that aims to unlock Africa’s agricultural potential. The strategy also aims to boost job creation with the view of making the agriculture sector profitable and a starting point for industrialization. With the ‘Feed Africa’ strategy, Africa would be able to feed itself and reduce net food importation by 2025.

“There is no reason for Africa to spend USD 35 billion importing food when the continent could feed itself, said Adesina, adding Africa must become a global powerhouse in food and agriculture.” And indeed, it could. Africa disposes of some 400 million hectares of agricultural land, waiting to be cultivated. However, different laws, regulations, policies and institutions applying to each African country make it hard for local farmers to access seeds, modern technology and equipment, and to transport their goods in order to sell them on the market.

In order to make the agricultural sector in Africa profitable, it needs to be transformed. African countries need to increase trade amongst each other, maximising their production and getting the food to where it is needed, instead of buying it from outside the continent. Removing barriers to regional trade will benefit farmers, who will make more money from the rising demand, as well as consumers, who are able to buy food cheaper and have more job opportunities by engaging in the growing agriculture sector. In order to unlock Africa’s large agricultural potential, African governments need to take collective action and produce a set of common rules, standards and taxes. Lifting the barriers to food trade could not only increase Africa’s production, eventually becoming able to feed itself, but could also contribute to decrease the high youth unemployment and give millions of young women and men a future in which they are able to sustain themselves.