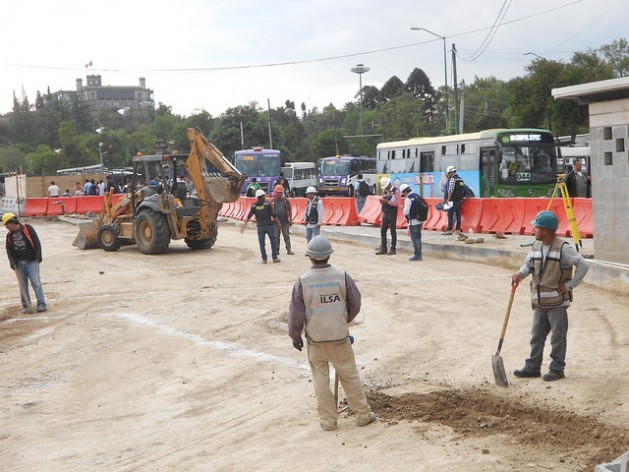 Construction work on the Chapultepec Intermodal Transfer Station, with the castle in the famous Chapultepec forest in the background. The recurrent complaint of Mexico City residents affected by public works in this city is the lack of consultation, transparency and information. Credit: Emilio Godoy/IPS

MEXICO CITY, Sep 23 2016 (IPS) - People living in neighborhoods affected by the expansion of urban construction suffer a “double displacement”, with changes in their habitat and the driving up of prices in the area, in a process in which “we are not taken into account,” said Natalia Lara, a member of an assembly of local residents in the south of Mexico City.

Lara, who is pursuing a master’s degree in public policies at the Latin American School of Social Sciences (Flacso), told IPS that in her neighborhood people are outraged because of the irrational way the construction has been carried out there.

The member of the assembly of local residents of Santa Úrsula Coapa, a lower middle-class neighborhood, complains that urban decision-makers build more houses and buildings but “don’t think about how to provide services. They make arbitrary land-use changes.”

Lara lives near the Mexico City asphalt plant owned by the city’s Ministry of Public Works, which has been operating since 1956 and has become asource of conflict between the residents of the southern neighbourhoods and the administration of leftist Mayor Miguel Mancera of the Party of the Democratic Revolution, which has governed the capital since 1997.

“There is clearly a lack of planning and vision, the strategy of only carrying out projects with a strictly economic focus is affecting us.There is no interest in building spaces that help improve community life. We are becoming more isolated, people don’t take their kids to play in parks anymore, but go to shopping centers instead, the fabric of the community breaks down. These are serious problems.” -- Elias García

In mid-2014, Mancera’s government announced its intention to donate the asphalt plant’s land to Mexico City’s Investment Promotion Agency, which would build the Coyoacán Economic and Social Development Area there.

In response, local residents organised and formed, in September of that year, the Coordination of Assemblies of Pedregales, which brings together residents of five neighborhoods in the Coyoacánborough, one of the 16 boroughs into which Mexico City is divided.

But the transfer of ownership of the land took place in December 2014, to create a development area including the construction of an industrial park and residential and office tower blocks.

To appease local residents, Mancera proposed modifying the initial plan and turning the area into an ecological park, despite the fact that the soil is polluted and will take many years to recover.

Last May, the mayor announced the final closure of the asphalt plant and its reconversion into an environmental site, although the decree for the donation to the city investment promotion agency was never revoked, and there is no reconversion plan.

This conflict shows the struggles for the city, for how the public space is defined and used, one of the central topics to be addressed at the Oct. 17-20 third United Nations Conference on Housing and Sustainable Urban Development (Habitat III) in Quito, Ecuador.

In the upcoming summit organised by U.N.-Habitat, member states will assume commitments with regard to the right to the city, how to finance the New Urban Agenda that will result from Quito, and sustainable urban development, among other issues.

Cities like the Mexican capital, home to 21 million people, are plagued with similar problems.

Elías García, president of the non-governmental Ecoactivistas, knows this well, having worked for three decades as an environmental activist in the borough of Iztacalco, in the east of the capital.

“There is clearly a lack of planning and vision, the strategy of only carrying out projects with a strictly economic focus is affecting us.There is no interest in building spaces that help improve community life. We are becoming more isolated, people don’t take their kids to play in parks anymore, but go to shopping centers instead, the fabric of the community breaks down. These are serious problems,” he told IPS.

The activist and other local residents have witnessed how in Iztacalco a concert hall, a race track for F1 international motor races, and more recently, a baseball stadium were built one after another.

In the process, some 3,000 trees were cut down and many green spaces and local sports fields disappeared.

The last measure taken was Macera’s 2015 decision to revoke the declaration of the Magdalena Mixhuca sports complex’s environmental value, which had protected the facilities for nine year, in order to build a baseball stadium in its place. Local residents filed an appeal for legal protection, but lost the suit last June.

Luisa Rodríguez, a researcher at the public Doctor José María Luís Mora Research Institute’s Interdisciplinary Center for Metropolitan Studies, told IPS that where people live determines their enjoyment of rights, such as to the city, a clean environment and housing.

“The exercise of citizenship is connected to the idea of the city. When a severely fragmented city is built, based on a model that only benefits the few, participation in social institutions like education and healthcare is only partial. Geographical location determines the exercise of those rights,” she said.

There are a number of open conflicts between organised local communities and the government of Mexico City. One high-profile flashpoint flared up in 2015 when the city government intended to build the Chapultepec Cultural Corridor in the west of the city, next to the woods of the same name, the biggest “green lung” that remains in this polluted megalopolis.

In a public consultation last December, the residents of the Cuauhtémoc borough, where Chapultepec is located, voted against the public-private project, which intended to build an elevated promenade for pedestrians, lined with shops, gardens and trees, above the traffic down below.

Instead, the city government is building an Intermodal Transfer Station (known as CETRAMs) at a cost of 300 million dollars, whose first stage is to be completed in 2018. Besides the transport hub, it will include a 50-floor hotel and a shopping center.

The Economic and Social Development Zones (ZODES), which originally were to be built in five areas in the capital, have apparently failed to improve the quality of urban life.

“In spite of the benefits these micro-cities are supposed to offer, the negative aspects of evicting the people currently living in these areas have not been assessed, and they run counter to the concepts of sustainability and strategic management that the government claims to support,” wrote city planner Daniela Jay in the specialised journal “Arquine”.

The last draft of the final declaration of Habitat III, agreed upon in July, makes no reference to the process of building a city based on inclusion and the active participation of citizens, although it does refer to exercising the right to the city and the importance of such participation.

Activists see both positives and negatives in the approach taken by Habitat III. The conference “will reinforce urban laws that focus on building cities, displacing the perspective of native people and local communities. There is no trend towards inclusion,” said Lara.

Activist García demanded that the local people be heard. “They have to listen to the people who are committed to protecting the environment,” he said.

According to Rodríguez, Habitat III offers an opportunity to address urban emergencies. “There are high expectations for governments to start focusing on building cities thinking about the inhabitants instead of the buildings,” she told IPS.

But with or without the conference, the battles for the city in urban centres like Mexico’s capital will continue.