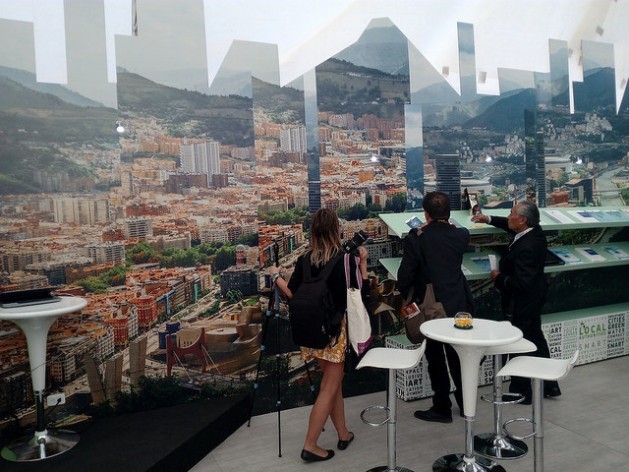 One of the concerns about compliance with Habitat III is how to finance the new public works, taking into consideration the considerable investment required. In the image, a photocomposition of European cities in a Habitat III exposition in Quito. Credit: Emilio Godoy/IPS

QUITO, Oct 27 2016 (IPS) - “We as mayors have to govern midsize cities as if they were capital cities,” said Héctor Mantilla, city councilor of Floridablanca, the third-largest city in the northern Colombian department of Santander.

He told IPS that “citizens not only demand public services, but also infrastructure; and environmentally and financially sustainable construction works are needed.”

Mantilla, who took office in January, participated in the United Nations Conference on Sustainable Housing and Urban Development (Habitat III), held Oct. 17-20 in the capital of Ecuador, which produced the “Quito Declaration on Sustainable Cities and Human Settlements for All,” known as the New Urban Agenda (NUA).

At the summit, organised by U.N. Habitat every 20 years, Mantilla talked about infrastructure needs and management.

In 2015, 54 percent of the world population lived in urban areas, a rate that will climb to 66 percent by 2050. The Americas will be the most urbanised region in the world, with 87 percent urban population.

Floridablanca, population 300,000, is part of the Bucaramanga metropolitan area, together with two other municipalities. To address people’s demands, the local administration built two highway interchanges and a paragliding park.

The mayor’s experiences and expectations reflect the concerns of governments, particularly local administrations. In fact, one of the NUA’s major challenges is the environmental and financial sustainability of the infrastructure required to meet the commitments made in Quito with regard to housing, transport, public services and digitalisation.

For Alicia Bárcena, executive secretary of the Economic Commission for Latin America and the Caribbean (ECLAC), the priorities are mobility, water and sewage, adequate housing, resilience, renewable energy, promotion of digitalisation and the fight against segregation and inequality.

“There is a lack of infrastructure. It is not sufficiently integrated. We have two scenarios: the United States with high car use rates, or the European, with smaller cities, where the use of private cars is discouraged,” she told IPS.

Bárcena said that “a certain kind of infrastructure and planning is required” in order for cities to be “resilient”, a concept touted in recent years by international organisations such as the World Bank and the Inter-American Development Bank (IDB), defined as the capacity of an ecosystem to absorb environmental stress without undergoing fundamental changes.

In 2015, 54 percent of the world population lived in urban areas, a rate that will climb to 66 percent by 2050. The Americas will be the most urbanised region in the world, with 87 percent urban population. The projected proportions are 86 percent in Latin America and the Caribbean; 74 percent in Oceania; 82 percent in Europe; 64 percent in Asia; and 56 percent in Africa. 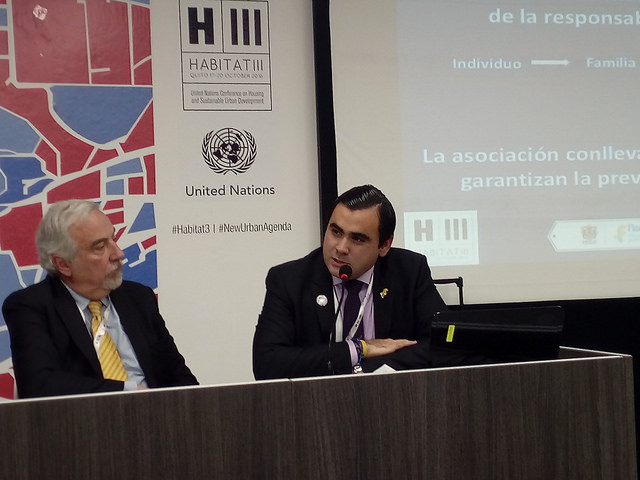 The report “Latin America and the Caribbean. Challenges, dilemmas and commitments of a common urban agenda”, released at the Quito summit, observes that, despite the significant expansion in infrastructure in recent decades, the deficit in cities remains one of the main challenges for developing countries in general.

The overall rate of investment in infrastructure “has declined in the last three decades, blaming a reduction in public investment, a marginal increase in private investment and the retraction of multilateral financing.”

There have been different attempts to calculate the scale of infrastructure needs. The IDB’s Emerging and Sustainable Cities Initiative estimates a need for 142 billion dollars in priority investments in urban infrastructure.

Meanwhile, the Cities Climate Finance Leadership Alliance (CCFLA) estimates a global need of 93 trillion dollars in investment in low-carbon climate resilient infrastructure over the next 15 years.

The NUA mentions the word “infrastructure” 33 times, although it outlines no means or goals to develop it.

A recurring question is where the funding for infrastructure will come from, given that regions such as Latin America are experiencing an economic downturn, after a decade of growth that made it possible to fight poverty and expand public works.

Andrés Blanco, a Colombian expert on urban development and housing with the IDB, proposes several mechanisms, including “land value capture”: capturing the increases in property values for the state. This refers to a municipality’s ability to benefit from the rise in real estate value generated by infrastructure improvements (access to highways, the paving of roads, public lighting, sewers, etc.) or the implementation of new land-use rules (e.g., from rural to urban).

“The main idea is to use this resource to finance infrastructure. But this has not been done, because there is a cash flow problem. The cost is paid by the government and the communities, but only private property owners benefit,” he told IPS.

In the Ecuadorean capital, the IDB released the report “Expanding the use of Land Value Capture in Latin America”.

In Floridablanca, the local government recovered 30,000 dollars of a total of 175,000, that the owners of 100 plots of land must pay for having benefited from investment in urban improvements.

“The main challenge facing the New Urban Agenda is how to find funding. We as mayors have to prioritise small-scale projects, but we need major infrastructure in outlying areas,” Mantilla said.

For Bárcena, Habitat III leaves an immense financing task. “Land use could be more profitable. States cannot do it alone. For this reason, there has to be a grand coalition between governments, companies, and organisations to make urban and public space more habitable, and to make cities more connected,” she said.

ECLAC, which is carrying out a study on time use in cities, proposes mechanisms such as: public policies on land value capture, to increase revenue collection and guide the way urban infrastructure is developed; the issue of municipal bonds to raise capital for long-term infrastructure projects; and platforms to draw private investment.

The United Nations Environment Programme’s “Global Outlook on Walking and Cycling”, released in Quito, calls for countries to invest at least 20 percent of their transport budget on infrastructure for pedestrians and cyclists, in order to save lives, curb pollution and reduce carbon emissions.