Howarth Bouis is Founder and Ambassador-at-Large of HarvestPlus 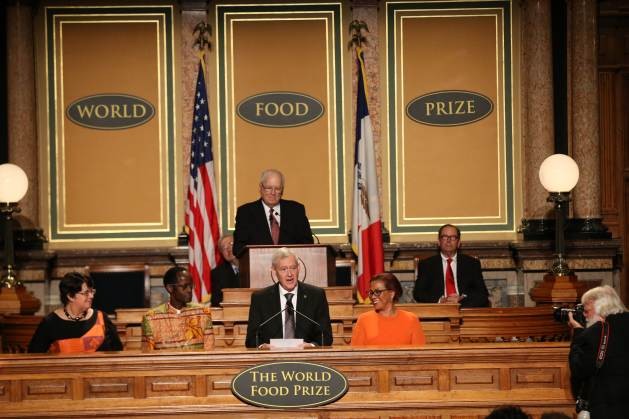 WASHINGTON DC, Dec 21 2016 (IPS) - This year’s World Food Prize pays tribute to biofortification, an intervention that strengthens efforts to address one of the world’s most insidious and pervasive public health challenges—hidden hunger. That is good news for the majority of the two billion people globally who suffer from hidden hunger, and likewise for those fighting to end the epidemic.

Hidden hunger is the lack of essential vitamins and minerals (micronutrients) necessary for a healthy and productive life. According to the World Health Organization, zinc, iron and vitamin A are among the micronutrients most lacking in diets globally. The deficiency in these particular micronutrients can lead to blindness, stunting, mental retardation, learning disabilities, low work capacity, and even premature death.

Women and young children are hardest hit. More than half of women and three-quarters of children aged under five in India, for example, are estimated to be iron deficient. The burden of hidden hunger extends to economies. India alone loses over $12 billion in GDP annually to vitamin and mineral deficiencies.[1]

The majority of populations most affected by hidden hunger reside in the developing world where regular access to important and effective interventions such as supplementation and fortification is constrained by cost and infrastructure challenges.

More than half of women and three-quarters of children aged under five in India, for example, are estimated to be iron deficient. The burden of hidden hunger extends to economies. India alone loses over $12 billion in GDP annually to vitamin and mineral deficiencies
Those populations are also, unfortunately, unable to diversify their daily diet and, therefore, their micronutrient intake since they rely largely on macronutrient- and/or energy-rich but micronutrient-poor staple food crops—rice, maize, cassava, beans, etc.—for sustenance. In India, for instance, only about one in 10 children regularly consume iron-rich food, while the proportion of children under two years of age who regularly consume vitamin A-rich foods is less than half.[2]

It is difficult to imagine a reversal in the global incidence and impact of hidden hunger without innovative new approaches to complement conventional nutrition interventions. Biofortification is not the silver bullet, but it can significantly expand the reach of nutrition to populations in need. Its underlying premise is that since millions of people eat staple food crops daily, improving the nutritional quality of these crops will lead to better nutritional and health outcomes.

By breeding and disseminating staple food crops rich in vitamins and minerals, biofortification can substantially increase the intake of micronutrients among households growing and consuming these improved crops.

Biofortification has distinct advantages.  It is sustainable; farmers and consumers who adopt biofortified crops can grow and eat these crops over and over, benefitting from the extra vitamins and minerals for free. It is a food based approach that lets the plants do some of the work. Biofortification is also cost effective. After the initial outlay of funds, the recurrent costs are minimal, and each dollar invested reaps $17 dollars’ worth of benefits.[3]

More importantly, biofortification is effective. Recently published studies show that crops biofortified with iron, such as pearl millet in India[4] and beans in Rwanda, [5] can reverse iron deficiency. Sweet potato biofortified with vitamin A reduced the incidence and duration of diarrhea among children in Mozambique.[6] The evidence on the nutritional and health impact of biofortified crops continues to grow as the crops gain momentum around the world.

To date, biofortified crops have been released in 30 countries, including India, and are under testing in an additional 25. HarvestPlus and its partners are developing and delivering these crops as public goods. At least four million households in Asia, Africa, and Latin America have already been reached with these nutritious crops. Scaling up delivery to reach a billion people with biofortified foods by 2030 is a key objective of HarvestPlus.

By shining the spotlight on biofortification, the World Food Prize has brought greater visibility and momentum to the strategy, and it can be the springboard for its scale up and impact globally. India, a country that is no stranger to agricultural innovations, will also play a major role in scaling up biofortification.

The country has already adopted several biofortified crops such as iron pearl millet, zinc rice, and zinc wheat, with more on the way. In 2018 New Delhi will host the Third Global Conference on Biofortification, which will explore strategies and partnerships to broaden delivery and adoption of the nutritious foods. This is a pivotal moment for biofortification and the millions of households around the world who stand to benefit from its success.

[4] The Journal of Nutrition

[5] The Journal of Nutrition