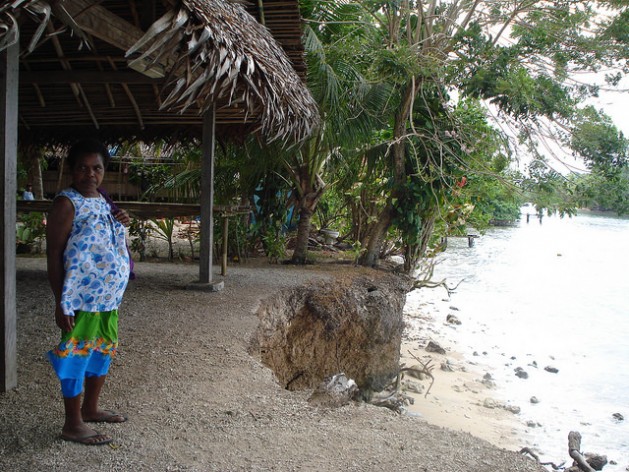 CANBERRA, Australia, Jan 19 2017 (IPS) - The new political power of business magnate Donald Trump, who will be inaugurated Jan. 20 as the 45th President of the United States, will have ramifications for every global region, including the Pacific Islands.

Pacific leaders who are witnessing rising seas, coastal erosion and severe natural disasters in the region are alert to the new president’s declared scepticism about climate change and the contributing factor of human activities. His proposed policy changes include cutting international climate funding and pushing ahead fossil fuel projects.

“It is sad for us who rely on the United States to do the right thing and to hear the president embarking on the opposite path, which is ensuring our destruction.” -- Reverend Tafue Lusama

They say the United States’ solidarity on climate change action is vital to protecting people in developing and industrialised nations from climate-driven disasters, environmental degradation and poverty.

There are 22 Pacific Island states and territories and 35 percent of the region’s population of about 10 million people lives below the poverty line. One of the most vulnerable to climate change is the Polynesian nation of Tuvalu, home to about 10,000 people spread over nine low lying coral islands.

“Tuvalu is among the poorest in the world, it is isolated, small and low in elevation. All aspects of life, from protecting our small land to food security, from our marine resources to our traditional gardens are being impacted by climate change. All the adaptation measures that need to be put in place need international climate funding. With Trump’s intended withdrawal pathway, our survival is denied and justice is ignored,” Reverend Tafue Lusama, General Secretary of the Tuvalu Christian Church and global advocate for climate action, told IPS.

Trump’s 100-day action plan, issued during last year’s presidential campaign, claims it will tackle government corruption, accountability and waste and improve the lives of U.S. citizens who have been marginalised by globalisation and ‘special interests’ of the political elite.

But his intended actions include cancelling billions in payments to United Nations climate change programmes, aimed at assisting the most vulnerable people in developing countries, and approving energy projects, worth trillions of dollars, involving shale, oil, natural gas and coal in the United States in a bid to boost domestic jobs.

Last December, 800 scientists and energy experts worldwide wrote an open letter to the then president-elect encouraging him to remain steadfast to policies put forward during the Barack Obama administration such as reducing the country’s dependence on fossil fuels, which in association with industrial processes accounts for 65 percent of global greenhouse gas emissions, and supporting renewable energy development.

“It is sad for us who rely on the United States to do the right thing and to hear the President embarking on the opposite path, which is ensuring our destruction,” Reverend Lusama added.

London-based Chatham House claims that a key success of the COP21 climate change conference in Paris in 2015 was the supportive ‘alignment’ of the United States, the second largest emitter accounting for 16 percent of global greenhouse gas emissions. Here the United States joined the High Ambition Coalition, a grouping of countries committed to rigorous climate targets, which was instrumental in driving consensus that global warming should be kept lower than 2 degrees Celsius above pre-industrial levels.

In 2015 the region was hit by a severe El Nino climate cycle which ‘forced people to walk for days seeking sustenance…and, in some cases, to become severely weakened or die from malnutrition,’ Caritas reports. In Papua New Guinea, 2.7 million people, or 36 percent of the population, struggled with lack of food and water as prolonged drought conditions caused water sources to dry up and food crops to fail.

And a consequence of more severe natural disasters in the region is that their arc of impact can be greater.

“Kiribati is one country in the world that is very safe from any disaster….[but] during Cyclone Pam in Vanuatu [in 2015] and Cyclone Winston, which hit Fiji [in 2016], the effects also reached Kiribati, which has never happened in the past,” Pelenise Alofa, National Co-ordinator of the Kiribati Climate Action Network, told IPS.

The economic toll of natural disasters is well beyond the capacity of Kiribati, a Least Developed Country with the third lowest Gross Domestic Product (GDP) in the world in a ranking of 195 countries by the World Bank.

“It is not in a position to meet its own adaptation needs because the climate change problems are too enormous for a small country like Kiribati to have enough resources to meet the problem head on,” Alofa said.

The economic burden extends to replacing coastal buildings at risk of climate change and extreme weather, which would cost an estimated total of 22 billion dollars for 12 Pacific Island nations, claims the University of New England in Australia. The risk is very high in the Republic of the Marshall Islands, Kiribati and Tuvalu, where more than 95 percent of built infrastructure is located within 500 metres of a coastline.

But the GCF, to which the United States, its largest benefactor, has committed 3.5 billion dollars, could suffer if Trump follows through on his promise, given that international pledges currently total 10.3 billion.

Ahead of the next United Nations climate change conference, to be chaired by Fiji in Bonn, Germany, in November, Pacific Island leaders are keen that President Trump visits the region. President Bainimarama has already invited him to Fiji and the Reverend Lusama would like him to also “visit Tuvalu to witness firsthand the proof which is so obvious to the naked eye of climate change impacts.”