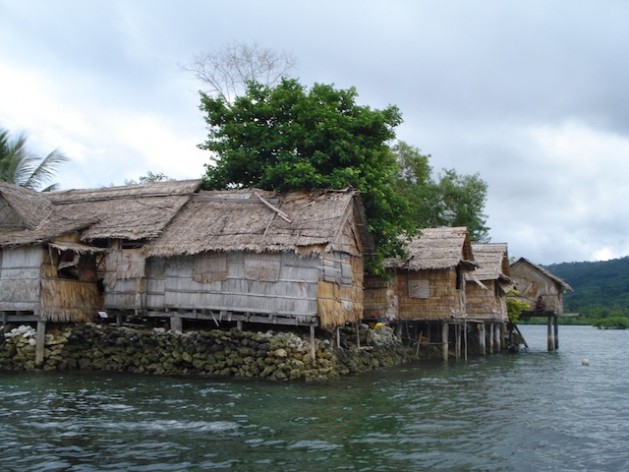 CANBERRA, Australia , Mar 24 2015 (IPS) - As Pacific Islanders contemplate the scale of devastation wrought by Cyclone Pam this month across four Pacific Island states, including Vanuatu, leaders in the region are calling with renewed urgency for global action on climate finance, which they say is vital for building climate resilience and arresting development losses.

In a recent public statement, the Marshall Islands’ president, Christopher Loeak, said, “The world’s best scientists, and what we see daily with our own eyes, all tell us that without urgent and transformative action by the big polluters to reduce emissions and help us to build resilience, we are headed for a world of constant climate catastrophe.”

“Like other small vulnerable countries, we have experienced great difficulty in accessing the big multilateral funds. The Green Climate Fund must avoid the mistakes of the past and place a premium on projects that deliver direct benefits to local communities." -- Tony de Brum, minister of foreign affairs for the Republic of the Marshall Islands
Progress on the delivery of climate funding pledges by the international community could also decide outcomes at the United Nations Climate Change Conference to be held in Paris in December, they say.

“It is reassuring to see many countries, including some very generous developing countries, step forward with promises to capitalise the Green Climate Fund. But we need a much better sense of how governments plan to ramp up their climate finance over the coming years to ensure the Copenhagen promise of 100 billion dollars per year by 2020 is fulfilled,” Tony de Brum, minister of foreign affairs for the Republic of the Marshall Islands, told IPS.

“Without this assurance, success in Paris will be very difficult to achieve.”

The Pacific Islands are home to about 10 million people in 22 island states and territories with 35 percent living below the poverty line. The impacts of climate change could cost the region up to 12.7 percent of annual gross domestic product (GDP) by the end of this century, the Asian Development Bank (ADB) estimates.

The Pacific Islands contribute a negligible 0.03 percent to global greenhouse gas emissions, yet are the first to suffer the worst impacts of global warming. Regional leaders have been vocal about the climate injustice their Small Island Developing States (SIDS) confront with industrialised nations, the largest carbon emitters, yet to implement policies that would limit global temperature rise to the threshold of two degrees Celsius.

In the Marshall Islands, where more than 52,000 people live on 34 small islands and atolls in the North Pacific, sea-level rise and natural disasters are jeopardising communities mainly concentrated on low-lying coastal areas.

“Climate disasters in the last year chewed up more than five percent of national GDP and that figure continues to rise. We are working to improve and mainstream adaptation into our national planning, but emergencies continue to set us back,” the Marshall Islands’ Foreign Minister said.

The nation experienced a severe drought in 2013 and last year massive tidal surges, which caused extensive flooding of coastal villages and left hundreds of people homeless.

“Like other small vulnerable countries, we have experienced great difficulty in accessing the big multilateral funds. The Green Climate Fund must avoid the mistakes of the past and place a premium on projects that deliver direct benefits to local communities,” de Brum continued.

Priorities in the Marshall Islands include coastal restoration and reinforcement, climate resilient infrastructure and protection of freshwater lenses.

Sixty percent of OECD aid in general to the Pacific Islands comes from Australia with other major donors including New Zealand, France, the United States and Japan. But in December, the Australian government announced far-reaching cuts to the foreign aid budget of 3.7 billion dollars over the next four years, which is likely to impact climate aid in the region.

Funding aimed at developing local climate change expertise and institutional capacity is vital to safeguarding the survival and autonomy of their countries, islanders say.

“We do not need more consultants’ reports and feasibility studies. What we need is to build our local capacity to tackle the climate challenge and keep that capacity here,” de Brum emphasised.

In the tiny Central Pacific nation of Kiribati, a Ministry of Foreign Affairs spokesperson expressed concern that “local capacity is limited”, a problem that is “addressed through the provision of technical assistance through consultants who just come and then leave without properly training our own people.”

Kiribati, comprising 33 low-lying atolls with a population of just over 108,000, could witness a maximum sea level rise of 0.6 metres and an increase in surface air temperature of 2.9 degrees Celsius by 2090, according to the Pacific Climate Change Science Program.

The country is experiencing higher tides every year, but can ill afford shoreline erosion with a population density in some areas of 15,000 people per square kilometre. The island of Tarawa, the location of the capital, is an average 450 metres wide with no option of moving settlements inland.

As long-term habitation is threatened, climate funding will, in the future, have to address population displacement, according to the Kiribati Ministry of Foreign Affairs:

“Climate induced relocation and forced migration is inevitable for Kiribati and planning is already underway. Aid needs to put some focus on this issue, but is mostly left behind only due to the fact that it is a future need and there are more visible needs here and now.”

Ahead of talks in Paris, the Marshall Islands believes successfully tackling climate change requires working together for everyone’s survival. “If climate finance under the Paris Agreement falls off a cliff, so will our response to the climate challenge,” de Brum declared.