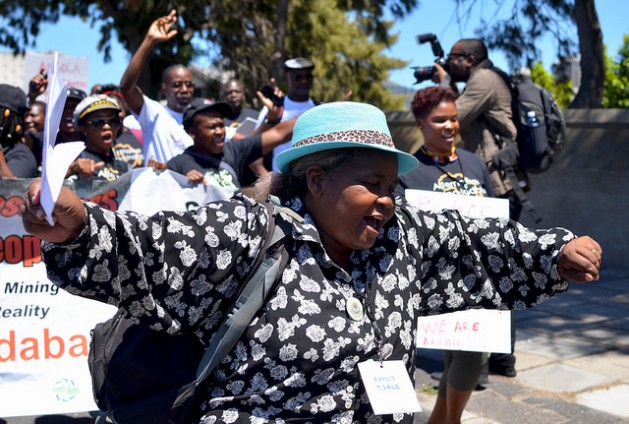 A delegate from the Alternative Mining Indaba dances during a protest march on Feb. 8, 2017. About 450 representatives of civil society mining-affected communities attended the conference in Cape Town. Credit: Mark Olalde/IPS

CAPE TOWN, South Africa, Feb 18 2017 (IPS) - “Comrades, we have arrived. This cherry is eight years awaited. We have made it to this place,” Bishop Jo Seoka told the crowd, pausing to allow for the whistles and cheers.

Seoka, the chairman of a South African NGO called the Bench Marks Foundation, presided over the crowd of protesters that was busy verbally releasing years of frustration at the continent’s mining industry. The protest on Feb. 8 was part of the Alternative Mining Indaba (AMI) held in Cape Town.

“We want transparency, we want accountability and, most importantly, we want participation of the people affected by mining." --Mandla Hadebe

The annual gathering brings together residents of mining-affected communities and civil society representatives to discuss common problems caused by the mining industry in Africa. On its third and final day, the AMI took to the streets to deliver its declaration of demands to industry and government representatives.

While police temporarily blocked the march from reaching the convention center hosting the Mining Indaba, the industry’s counterpart to the AMI, protesters were angry after years of having their side of the story largely ignored.

They marched up to the line of police and private security guarding the doors to the conference hall and demanded to speak with members of the Mining Indaba.

“As citizens and representations (sic) citizen-organisations we wish to express our willingness to work with African governments and other stakeholders in the quest to harness the continent’s vast extractive resources to underpin Africa’s socio-economic transformation and the [Africa Mining Vision] lays a foundation for this,” the declaration stated.

“I very much appreciate the willingness to engage in dialogue, and I think this is the first step towards establishing a common vision,” Tom Butler, CEO of the International Council on Mining & Metals, told the crowd before signing receipt of the declaration and handing it over for the managing director of the Mining Indaba to also sign. 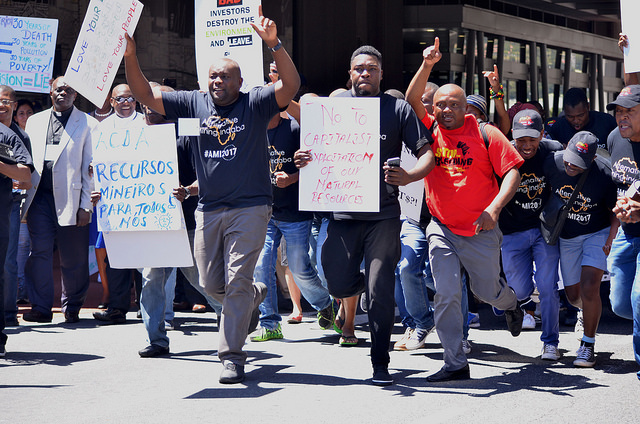 While Butler came to the AMI to give a presentation on the mining industry’s behalf, few other members of government or the industry made an attempt to engage with the AMI. The Mining Indaba’s Twitter account even blocked some AMI delegates who took to social media to air their grievances.

The official Mining Indaba is a place for mining ministers, CEOs of mining houses and other industry representatives to network and strike deals. During the event, South Africa and Japan, for example, signed a bilateral agreement to boost collaboration along the mining value chain.

“This Indaba has affirmed South Africa’s status as a preferred investment destination,” Mosebenzi Zwane, the country’s minerals minister, said in a statement following the event. “As government, we are heartened by this and recommit to ensuring the necessary regulatory and policy certainty to attract even more investment into our country.”

In his opening address at the Mining Indaba, Zwane also announced that the draft of the new Mining Charter, a document guiding the country’s mining industry, would be published in March.

The AMI, however, was born as a community-level response to the fact that such decisions are usually made without consulting those most impacted by mining.

“They are going to find this huddled mass of people,” Mandla Hadebe, one of the event organizers, said of the protest’s goals in the first year. Only 40 delegates were present. 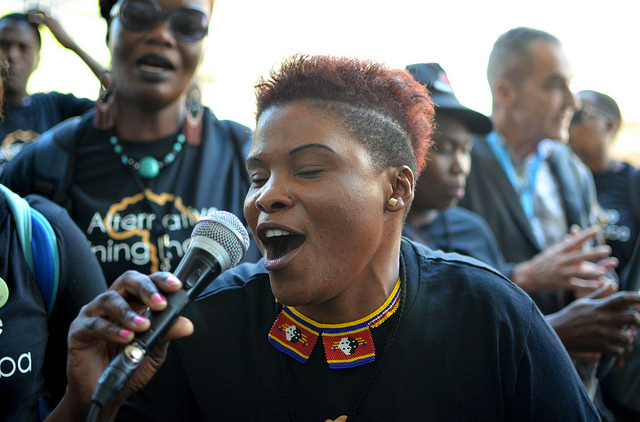 An Alternative Mining Indaba delegate from Swaziland sings protest songs. There was a feeling of triumph among the delegates after achieving even a degree of acknowledgement from industry representatives. Credit: Mark Olalde/IPS

In its eighth year, the AMI has grown to about 450 participants representing 43 countries. Delegates came from across Africa – from Egypt to the Democratic Republic of the Congo and Malawi – as well as the rest of the world – from Cambodia to Bolivia and Australia – to share their stories.

“It just shows that our struggles are common and that we’ve decided to unite for a common purpose,” Hadebe said of the growth. “We want transparency, we want accountability and, most importantly, we want participation of the people affected by mining.”

A number of panels dedicated to community voices gave activists a platform to share their stories and methods of resistance. Translators in the various conference rooms translated among English, French and Portuguese, a necessity as well as a tacit nod to the ever-present effects of the same colonialism that brought mining.

“What we heard first were promises,” a woman from Peru recounted. “Thirty years passed, and now I call the second part of this process ‘the lies.’”

“We are trying to build a critical mass that is angry enough to oppose irresponsible mining,” a delegate from Kenya explained.

Some panels addressed specific issues facing Africa’s extractive industry. One discussion explained the need to move away from indirect taxes toward direct ones focused on mining houses. The presenter, a member of Tax Justice Network-Africa, said that an increase in government audits had led to a surge in tax revenue since 2009, a rare success story.

Another panel dealt with the realities of impending job loss due to widespread mechanization, while others took on the need for governments to strike better deals with international corporations.

Side events provided forums for more nuanced learning on topics such as the corruption involved with mining on communal land. At the showing of a documentary following South African land rights activist Mbhekiseni Mavuso, delegates from other countries such as Sierra Leone compared and contrasted their own forced relocations.

Mavuso said, “We are regarded as people who do not count. We have now become what we call ‘victims of development,’ and so that is also making us to become victims of democracy. We are fighting, so let us all stand up and fight.”

Occasionally, delegates took to the microphone to lament continued talk with minimal action. Much of the AMI focused on the Africa Mining Vision, a document produced by the African Union. While its goal is to make mining beneficial for all Africans, the document is a high-level policy discussion lacking a direct connection to affected communities.

The three-day conference has outgrown its ability to delve deeply into every issue impacting the represented countries, so delegates have taken the idea to their home nations. In the past year, Madagascar, Angola, Swaziland and others held their first country-specific alternative indabas.

Only a week before the AMI, South Africa hosted its first such conference in Johannesburg.

Despite many delegates expressing feelings of helplessness or anger, the march to the Mining Indaba provided a temporary sense of victory.

After finally obtaining some level of acknowledgment from industry representatives, the AMI participants danced and took selfies outside the Mining Indaba, far from the townships and rural villages adjacent to mines.

As the delegates boarded busses to depart the event, the vehicles shook from stomping and singing, and some protesters leaned out the windows to shout their last parting sentiments on behalf of mining-affected communities around the country and the continent.

*Mark Olalde’s mining reporting is financially supported by the Pulitzer Center on Crisis Reporting, the Fund for Environmental Journalism and the Fund for Investigative Journalism.