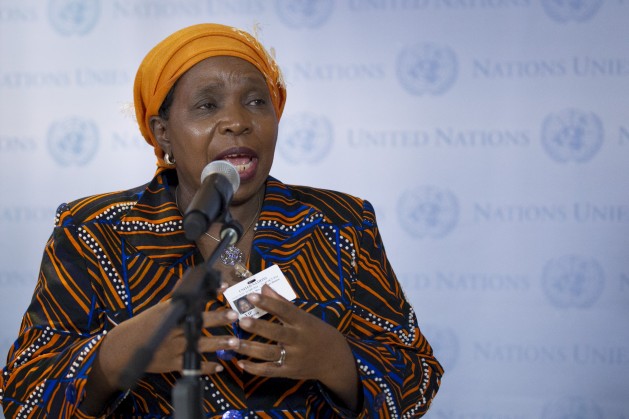 NEW YORK / UNITED NATIONS, Feb 1 2017 (IPS) - Outgoing African Union Chair Nkosazana Dlamini Zuma has described the United States ban on refugees and immigrants from seven countries as “one of the greatest challenges and tests to our unity and solidarity.”

Speaking to African leaders on Monday Zuma asked why “the very country to whom our people were taken as slaves during the Trans-Atlantic slave trade, have now decided to ban refugees from some of our countries.”

African leaders are not the only ones who see the ban as a test of unity and solidarity.

Others see growing anti-Muslim sentiment as a rallying point for solidarity between different religious groups, with American Jews questioning the “terrible irony” of the bill being signed on Holocaust Remembrance Day.

IPS spoke with Fadi Hallisso, a former Jesuit from Syria and Said Sabir Ibrahimi, who was born in Afghanistan and is involved in interfaith solidarity events between Jewish and Muslim people living in New York.

“Religion is a powerful tool, but instead of using it for destruction and hatred, we are going to use it to build bridges between different communities to pave the way towards a better community for our kids,” -- Fadi Hallisso

Hallisso, is the co-founder of Basmeh and Zeitooneh a Syrian NGO, whose five founders include three Christians.

“Our work in Turkey and Lebanon is almost 100 percent with Muslim Syrians,” Hallisso told IPS. “I think working hand-in-hand with different people from different religious backgrounds is what we need right now.”

“Religion is a powerful tool, but instead of using it for destruction and hatred, we are going to use it to build bridges between different communities to pave the way towards a better community for our kids,” he said.

Trump’s order also states that once the U.S. refugee program resumes it will prioritise claims from religious minorities – prompting some to believe that Christian refugees from these Muslim majority countries will be prioritised.

However Hallisso, himself a Syrian Christian, disagreed that in the case of Syria Christians are more persecuted than Muslims.

“We are all human beings suffering from an impossible situation that we wish to have an end to soon,” he said.

Hallisso described the women’s marches that occurred the day after Trump’s inauguration as an important act of solidarity.

“I wish we can in the coming few months and years to expand this solidarity to become global solidarity movement,” he said. “If the people of goodwill do not work together and the bad guys would have the last say.”

Said Sabir Ibrahimi, who was born in Afghanistan and now lives in New York told IPS that he has seen a growing movement of people of different background in the United States bridging divides.

Ibrahimi is part of a group which organises interfaith solidarity events between Jewish and Muslim people living in New York.

“We sense open Islamaphobia and subtle anti-semitism – not to mention the anti-women rhetoric and more,” Ibrahimi told IPS.

“The good news is that some Muslim-Jewish and other faith or non-faith groups have come together to voice their concerns about this whole chaotic policy shift and we have witnessed these groups showing up in protests in large crowds, across the country, in unprecedented ways probably since the 1960s during the Vietnam war.”

Meanwhile, the White House has also been criticised for failing to mention Jewish people in its statement issued on Holocaust Memorial Day.

“I think it’s so bizarre to talk about the Holocaust and not mention Jewish people,” said Ibrahimi. “It was the Jewish people who had suffered the most during those horrific times of World War Two.”

He said that people are drawing connections and associating significance with the marginalisation of minorities in Nazi Germany and the events unfolding in the United States.

For some American Jews, it was no coincidence that the dramatic change in US immigration policy was announced on Holocaust Remembrance Day:

“The fact that President Trump’s order appears designed to specifically limit the entry of Muslims evokes horrible memories among American Jews of the shameful period leading up to World War Two, when the United States failed to provide a safe haven for the vast majority of Jews in Europe trying to escape Nazi persecution,” said Ben-Ami.

Meanwhile, former U.S. Secretary of State Madeleine Albright wrote on Twitter on Wednesday that she was ready to register as a Muslim in response to Trump’s proposed Muslim Registry – which as yet has not been enacted:

“I was raised Catholic, became Episcopalian & found out later my family was Jewish. I stand ready to register as Muslim in #solidarity,” said Albright who came to the United States from Czechoslovakia as a refugee.

Hallisso expressed dismay that the United States a country “built on immigration,” and “built by immigrants escaping religious persecution in Europe” has begun “portraying all immigrants and refugees as potential terrorists.”

“To see this coming from Americans now, some American leaders, is for me devastating because it is like someone ignoring all of the history of his own country,” he said.

“But also it is problematic for us in the Middle East for a number of reasons, because for God’s sake, how do you expect countries like Lebanon and Jordan and Turkey to continue to receive more than a million refugees if 10,000 Syrian refugees coming to the United States are a problem?”