DHAKA, Bangladesh, Mar 6 2017 (IPS) - The world of work is changing for women across the globe and Bangladesh is no exception. Factors such as globalization, advancement in technology, and the digital revolution have ushered in new ways for women to enter into work. The theme for the International Women’s Day, 8 March, 2017, focuses on “Women in the Changing World of Work: Planet 50-50 by 2030” under which gender parity in the workforce is the critical prerequisite for inclusive and sustainable economic growth. 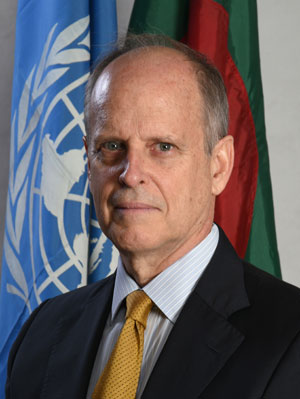 A McKinsey Global Institute report in 2015 found that $28 trillion could be added to the global GDP by 2025 if women, who make up half of the word’s work-age population, were to achieve their economic potential. Gender parity at work is a global economic challenge but efforts at a national level can make a significant difference. While there is a general consensus regarding the urgent need to increase women’s participation in the workforce and acknowledge their contributions to the global economy, we are still far from creating an economy that allows all women to realize their potential free from discrimination or threat of violence and sexual harassment.

Bangladesh has made great strides in improving the lives of women and girls. In the last decade, poverty has been slashed by half; nearly 90 percent of girl children are enrolled in schools; child mortality has reduced by 60 percent. Moreover, Bangladesh’s commitment to the global 2030 roadmap and Sustainable Development Goals (SDGs) has placed gender equality and empowerment of all women and girls at the heart of its gender-responsive agenda. The Government’s Vision 2021 as well as the Seventh Five-Year Plan prioritizes this agenda and we must applaud their bold leadership in pursuing progress, persistently and creatively, for inclusive economic growth. However, challenges such as poor working conditions, rising incidences of gender-based violence, rapid and unchecked urbanization, limited access to basic social services, and climate change continue to disrupt the progress made towards women’s economic empowerment.

In Bangladesh, the ready-made garment sector remains one of the most important drivers of women’s ability to engage in paid work. Earlier studies have shown that women make up approximately 80 percent of their workforce, but more recent trends suggest that female participation may actually be less than 60 percent. The 2016 National Labor Survey results should shed important light on the overall status of women in the economy. The survey results, upon release, will hopefully initiate a widespread debate around the necessary gender-responsive action required to increase the participation of women across all sectors.

In spite of encouraging signs of improvement in the formal economy, women continue to face enormous challenges in building sustainable and empowering livelihoods. Women migrant workers from Bangladesh – over 169,000 in the last three years alone, as per the Ministry of Foreign Affairs – are commonly subjected to multiple and intersecting forms of discrimination and exploitation due to inadequate standards for accountability and vigilance, legal channels and compact focusing on their rights, voice, and leadership. Similarly, in the RMG sector women earn, on average, 45 percent less than their male counterparts and usually do not have the knowledge, skills or opportunities to grow their incomes or savings. In addition, the constant threat of gender-based violence both at home and at work creates barriers that prevent women garment workers from influencing or changing working conditions for the better.

One of the key measures to ensuring women’s economic empowerment in the changing world of work is bridging the persistent gender pay gap. According to one estimate, this gap for women in waged labor in Bangladesh stands at 48 percent –almost double of the global 24 percent average. Closing this gap will require national-level policies and regulations, complimented by financial incentives, capability building, advocacy and awareness. We must also recognize women’s unpaid contributions to the ‘invisible’ economy in the form of care and domestic work, as well as address the gender gap in leadership and entrepreneurship. National policies must address the overwhelming majority of women in the informal economy, promote access to innovative technologies and practices, introduce climate-resilient jobs, and create safe working environments for women.

Working alongside the Government and other partners invested in economic growth — the private sector, civil society organizations, and media — the United Nations is committed to improving and increasing women’s representation and access to decent work. We are committed to enabling and facilitating access to services that level the playing field and increase the odds for women to fully and meaningfully enter, stay, and grow in their workplace.

In a world where women’s prospects are blighted by regressive norms and attitudes, both men and women have to take a stand for meaningful change. If we are to reach Planet 50-50 by 2030, we have to collectively devise accelerators and implement both short and long-term measures that are viable and effective. The private sector, in partnership with government and non-governmental organization, can do a lot more to improve working conditions for women. There is ample evidence from around the world that companies stand to benefit both directly and indirectly by introducing measures that value and promote gender parity.

Today, on International Women’s Day, we call upon all actors to step forward and work towards achieving Planet 50-50 by 2030. Let’s commit publicly through platforms like the UN Women’s He for She campaign (visit heforshe.org) to set ambitious yet achievable gender goals over the next five years. The Government of Bangladesh’s Seventh Five-Year plan coincides with the first phase of the UN’s SDGs and the timing couldn’t be any better to collectively drive inclusive economic progress, emboldened by bold thinking and courageous leadership.

Join the movement, Be Bold For Change.