This article is part of special IPS coverage on the occasion of International Women’s Day, celebrated March 8. 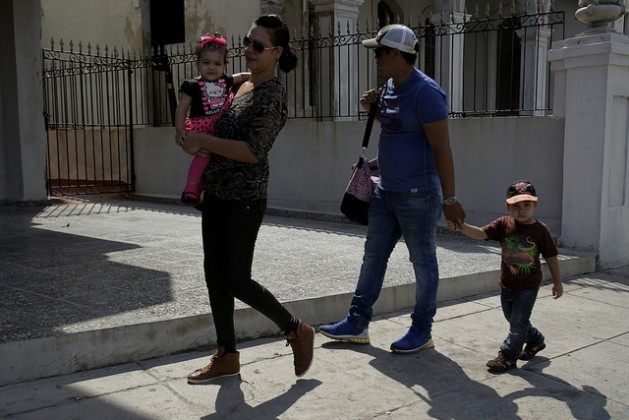 A Cuban family walks down a street in the neighborhood of Vedado, in the Plaza de La Revolución municipality, in Havana, Cuba, where just 49 per cent of children grow up in households with both parents. Credit: Jorge Luis Baños/IPS

HAVANA, Mar 6 2017 (IPS) - A new set of regulations to strengthen the maternity rights of working women and encourage people to have children in Cuba were seen as a positive step but not enough, because they do not include measures to encourage more active participation in child-rearing by men.

“These legislative changes promote responsible maternity and paternity,” sociologist Magela Romero, who is about to become a mother, told IPS. “There are still aspects to review to achieve a legal text which reflects from beginning to end its spirit of promoting a culture of equality between parents.”

Against a backdrop of a record low fertility rate and accelerated aging of the population, the authorities published on Feb. 10 two new decree-laws and four statutes that modify the 2003 Law for Working Mothers, which was reformed previously in 2011.

The theme this year of International Women’s Day, celebrated Mar. 8, is “Women in the Changing World of Work: Planet 50-50 by 2030”, because improving the participation of women in the labour market is seen as essential to achieving equality.

Romero, who is currently studying the father figure in Cuba’s labour legislation, proposed revising even “the most subtle aspects, such as the title of the law itself, which doesn’t mention the working father, and therefore could conceal them as possible beneficiaries.”

In 2003, Cuba placed itself in the forefront in Latin America, passing a law that ensured working fathers one year of parental leave in case they became widowers or were abandoned by the mother.

But in what is seen as a sign of the prevailing sexism in Cuban society, few men have availed themselves of this benefit. The latest figures show that only 125 fathers requested parental leave between 2006 and 2013, in this Caribbean island nation of 11.2 million people.

In response to the low level of involvement by fathers and to address the fact that many children are mainly cared for by their grandmothers, the new regulations also allow working maternal or paternal grandparents to request leave to take care of newborns.

According to the latest population and housing census, from 2012, just 49 per cent of children in Cuba lived with both parents, 38 per cent only lived with their mother (the majority) or their father, while 13 per cent were at the time being cared for by other relatives.

Cuba is the country with the lowest number of children per woman in Latin America – 1.72 in 2015, according to official figures – in a country which since 1978 has had a fertility rate below the replacement level of one daughter per woman, a situation that the region as a whole will not reach until 2050. 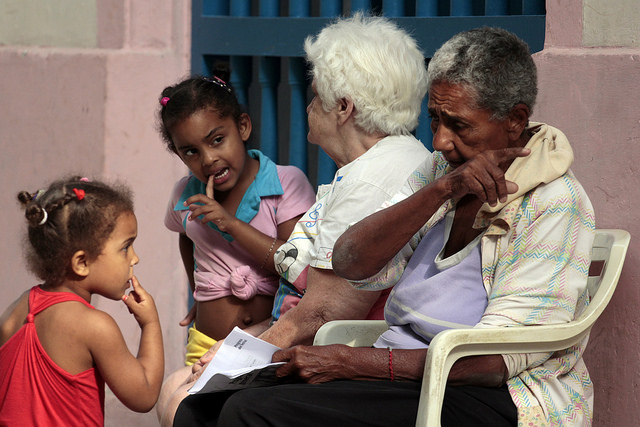 Two grandmothers sit with their granddaughters, whom they take care of while their mothers work, on a street in the historic centre of Old Havana, Cuba. Working grandmothers and grandfathers are included in the benefits established by the new regulations to encourage people to have children. Credit: Jorge Luis Baños/IPS

Romero said the new laws acknowledge new developments that have arisen in light of the current economic reforms, such as women having more than one job, and those that make up the growing private sector, who constitute 32 per cent of the 507,342 registered self-employed workers.

For this reason, women who work in the private sector and have two or more children under 17 will pay only 50 percent of the monthly taxes they would otherwise owe. And people with a permit to offer services of childcare, or caring for sick, disabled or elderly people, will also pay half of the monthly tax.

Moreover, women who go back to their public sector jobs before the end of the year of maternity leave continue to draw the monthly stipend of 60 per cent of their salary. And those with two jobs receive maternity payments for each job.

In addition, families with more than two children pay reduced fees, or are even exempt from paying, for public daycare and school meals.

Hundreds of comments on local news websites have urged the authorities to take measures in that direction and have assessed them as positive, for seeking to ease the heavy economic burden that a baby implies in a country in the grip of a virtually chronic economic crisis since 1991, and which is now suffering a new economic downturn.

Having a baby in Cuba “can be economically a tremendously stressful challenge,” said Mayra García, who is expecting at any moment the birth of her first child. It is even hard for her and her husband, who waited to get pregnant until they had their own house, were economically independent and had stable jobs in their professions.

“And few couples our age are able to achieve such economic independence,” the 30-year-old editor, who hopes to have at least two children, told IPS.

She said it was a good thing that new mothers who return to their jobs before the year is up continue to draw their maternity leave stipend. And she called for the expansion and improvement of public childcare services, to help families reconcile family life and work.

“Currently, public childcare centres are unable to keep up with demand,” she said. 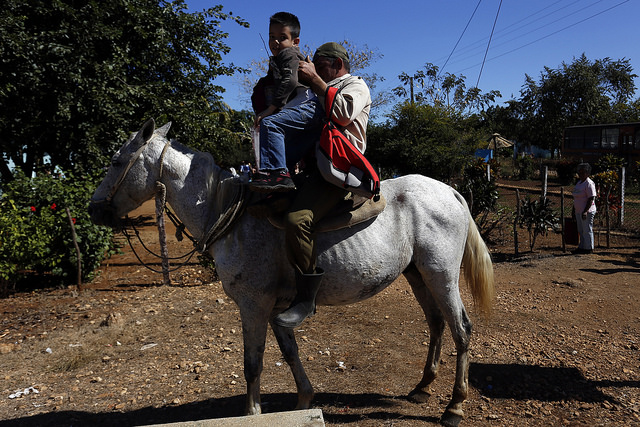 A father settles his son on his horse, as he picks him up from school in a rural community in the central province of Villa Clara, Cuba. The new legislation to stimulate maternity in the country doesn’t pay any attention to fathers, according to experts. Credit: Jorge Luis Baños/IPS

Marybexy Calcerrada and Aida Torralbas, psychologists and gender experts who live in the city of Holguín, 689 km east of Havana, propose creating support mechanisms in the workplace for more specific cases.

“A quota for subsidised purchases of a variety of products to meet the basic needs of infants and adolescents could be considered,” Calcerrada told IPS, urging “continued encouragement of the involvement of men in their role as fathers.”

She believes that “parents should be given quotas of hours for justified absence from work to take care of children in the face of health problems and school needs.”

Studies show that working women in Cuba earn less than men, despite earning equal wages, because they are absent more often from their jobs, to take care of their children and sick and elderly people in their care.

For Torralbas, the new reforms in the legislation “could have been a good opportunity to give fathers a short period of leave after their baby’s birth. In other countries, the father has two weeks of parental leave when his child is born,” she said as an example.

“In Cuba, women and men think it over carefully before having children,” said Frank Alejandro Velázquez. “They are not the same mothers and fathers as 60 years ago. They have been taught to think about minimally adequate, fair social conditions, infused with gender equality, before having a child.”

This young expert of the Christian Centre for Reflection and Dialogue- Cuba, in the city of Cárdenas, 150 km east of Havana, also brought up other issues, such as the “social uncertainty” that exists in this country where the government began to reform its socialist system in 2008.

“These measures are just a step forward with respect to previous legislation,” he told IPS.