Caregiving Exacerbates the Burden for Women in Cuba 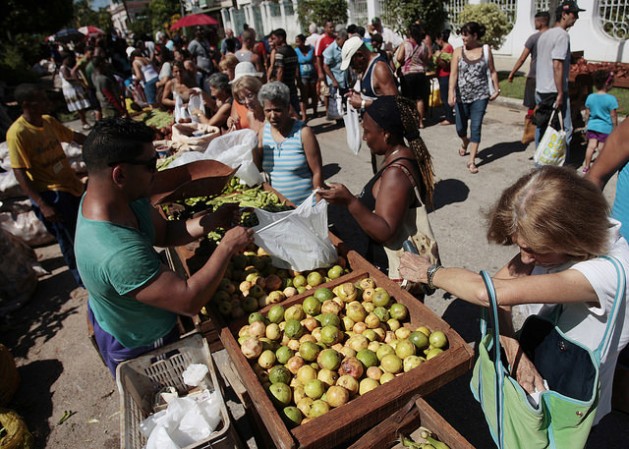 Women buying food at a farmers market in the Playa neighbourhood of Havana. More than 98 percent of the unpaid domestic work and family care in Cuban homes falls to women. Credit: Jorge Luis Baños/IPS

HAVANA, Aug 20 2014 (IPS) - Hortensia Ramírez feels like she needs more hands to care for her 78-year-old mother, who suffers from arteriosclerosis, do the housework, and make homemade baked goods which she sells to support her family.

She starts her day at 6:00 AM, putting the sheets that her mother wet during the nighttime to soak, before preparing the dough for the pastries and making lunch for her two sons; one works in computers and the other is in secondary school.

“Two years ago I quit my job as a nurse because my mother couldn’t be alone, and although I have a brother who helps with the expenses, I provide the day-to-day care,” the 57-year-old, who separated from her second partner shortly before her mother started to need round-the-clock care, told IPS.

“Since then my life has been reduced to taking care of her, but it’s more and more complicated to put food on the table and to get her medication – and don’t even mention disposable diapers on my limited income…Well, let’s just say I end my day exhausted.”

Like the majority of middle-aged Cuban women, Ramírez feels the burden of domestic responsibilities and family care, exacerbated by economic hardship after more than 20 years of crisis in this socialist country.

The burden of caretaking traditionally falls to women, which sustains gender inequalities and makes women vulnerable to the reforms undertaken by the government of Raúl Castro since 2008, aimed at boosting productivity and the efficiency of the economy, but without parallel wage hikes.

The reduction of the number of boarding schools where students combine learning with agricultural work in rural areas, the closure of workplace cafeterias, and cutbacks in the budget for social assistance have left families on their own in areas where they used to receive support from the state, and which affect, above all, the female half of the population of 11.2 million.

“The state is passing part of the burden of caregiving and healthcare and education to families, but economic development should take into account the contributions made by families,” economist Teresa Lara told IPS.

If no one cooks, takes care of the collective hygiene, helps children with homework or cares for older adults and the ill, then the workforce won’t grow, the expert said.

Cuban women in the labour market

- Women who work in the public sector are mainly concentrated in services, where they total 1,071,400.

Sources: Statistical Yearbook 2013 of the National Office of Statistics and Information (ONEI) and Census on Population and Housing 2012

But these tasks, which almost always fall to women, remain invisible and unpaid.

Cuban women dedicate 71 percent of their working hours to unpaid domestic work, according to the only Time Use Survey published until now, carried out in 2002 by the National Office of Statistics and Information (ONEI).

The study, whose results remain valid today according to experts, found that for every 100 hours of work by men, women worked 120, many of them multitasking – cooking, cleaning, washing and caring for children.

Based on those tendencies, Lara estimates that unremunerated domestic work and caregiving would be equivalent to 20 percent of GDP – a larger proportion than manufacturing.

And that percentage could be even higher today given the complexity of daily life in Cuba, the economist said.

Without laundries, dry cleaning services, industries that produce precooked foods or other services that ease domestic tasks at affordable prices, Cuban families have to redouble their efforts to meet household needs.

To that is added the rundown conditions of homes for the elderly and public daycare centres and the reduction of the state budget for social assistance, from 656 million dollars in 2008 to 262 million in 2013, according to the national statistics office (ONEI).

Women often end up stuck in lower level jobs, or dropping out of the job market altogether, because of the burden of caretaking for children, the ill or the elderly, on top of the other household duties.

Many women find it hard to cope financially with the burden of caregiving, in a country where the average monthly salary is 20 dollars a month while the minimum amount that a family needs is three times that, even with subsidised prices for some food items and services.

ONEI statistics show that the female unemployment rate rose from two percent in 2008 to 3.5 percent in 2013, parallel to the drastic pruning of the government payroll, which could soon bring the number of people left without a job up to one million.

Although the number of areas where private enterprise or self-employment is permitted was expanded, they do not guarantee social security coverage. Nor do they tap into the expertise accumulated by women, who make up over 65 percent of the professional and technical workforce in this Caribbean island nation.

Sociologist Magela Romero says that burdening women with the social role of caretaker buttresses the unequal power relations between the genders, with economic, emotional, psychological and sexual consequences for women.

A qualitative study of 80 women from Havana carried out by the university professor in 2010, which IPS saw, concluded that a number of those interviewed were caught up in an endless cycle of caregiving: after they completed their studies they spent the rest of their lives raising children and taking care of parents, parents-in-law, grandparents, grandchildren, spouses and other family members.

This situation is especially complex in a country with an aging demographic, where 18 percent of the population is over 60 and 40 percent of households include someone over that age.

Adriana Díaz, an accountant, was only able to work in her profession for less than a decade.

“First my kids were born, and I raised them. Then I got divorced and I went back to work for four years, which were the best years of my life. But when my mother fell seriously ill, I quit again,” the 54-year-old told IPS.

Nearly nine years taking care of her mother round the clock left Díaz with a bad back and cardiovascular problems. Besides the fact that she is entirely dependent on her children, who moved abroad.

Social researcher María del Carmen Zabala says the gender gaps in employment that are a by-product of the fact that the responsibility for caregiving falls almost exclusively on women require policies that specifically address women, in line with the changes currently underway in the country.

Citing the rise in the proportion of female-headed households to 45 percent, according to the 2012 Census on Population and Housing, Zabala said specific policies targeting these families are needed, because they are especially vulnerable.