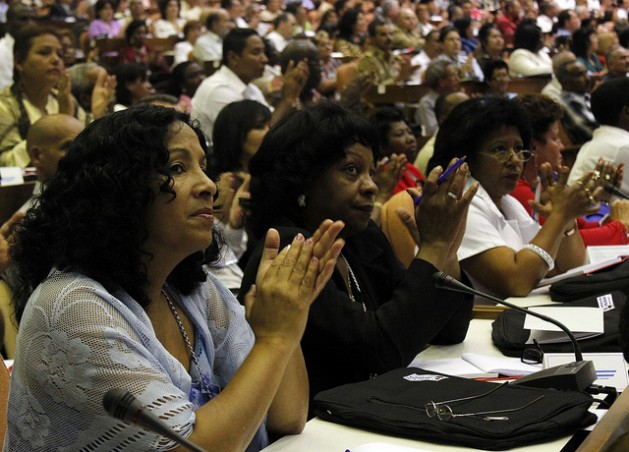 HAVANA, Jul 18 2013 (IPS) - Despite the progress made by Cuban women in education, where they account for 64 percent of university graduates, they continue to have a limited presence in management positions.

“We still face many barriers in access to management-level and executive jobs,” Mirtha Reina Reyes, head of the legal department for the state Construction Enterprise Group in Havana, told IPS.

The 44-year-old lawyer took her current job in 2008 as a way of working closer to home so that she could devote more time to her youngest son, who has Down’s syndrome. “I never imagined that I would be in industry,” said Reyes, who previously worked in a courtroom.

“What is hardest for women is the high cost that comes with being in management jobs,” she said.

She added that women “are too tied down to domestic work, even if they don’t have children or elderly family members to take care of.”

Extended workdays (longer than the regular eight-hour day and sometimes involving weekends), a need for strategies to gain respect as managers or executives, and an excessive burden of domestic chores are among the principal hurdles identified by women managers studied by psychologist Dalia Virgilí.

She is one of the few researchers who use a gender-based approach in the unexplored world of the Cuban state-run business enterprise, currently comprising 2,250 companies, according to 2012 figures from the National Office of Statistics and Information (ONEI).

“There are major inequalities between men and women in the business world, at the executive level and at all other levels,” Virgilí told IPS.

“Women pay higher costs; they face conflicts because they are women, and they are forced to find strategies for keeping their jobs,” she said.

“This is a level to which everyone wants access,” she said. After women gained ground in the world of academia and research, they began to move up in the country’s public enterprises.

These companies, especially in productive areas and tourism, represent the best employment opportunities in Cuba’s depressed economy. In these sectors, workers who have gone through the “sistema de perfeccionamiento empresarial” or “business improvement system” receive performance-based pay and better bonuses.

The system, implemented since last decade with the aim of increasing productivity, autonomy and efficiency, was revised as part of the current economic reforms, which include a focus on giving a boost to state enterprises, according to excerpts published from the latest session of parliament.

Despite the limits they still face, five state companies that are implementing the system in the municipality of Isla de la Juventud – the second largest island in the Cuban archipelago – achieved productivity levels in 2011 that enabled them to pay monthly salaries of more than 550 Cuban pesos (about 22 dollars).

That year, the average monthly salary nationwide was 455 Cuban pesos, an indicator that rose slightly – to 466 pesos – at the end of 2012, according to ONEI. The highest salaries are paid in the construction sector.

While men and women are supposed to receive equal pay, activists and experts warn that in practice women tend to receive lower wages, because they tend to miss work more often to take care of their children and older relatives. They also have less access to high-income jobs.

The International Labour Organisation reported a reduction of the gender-based salary gap between 2008 and 2011 in countries where statistics were available, which did not include Cuba. However, this reduction was not always caused by better conditions for women; sometimes it was due to fewer men obtaining jobs due to the global crisis, the ILO reported.

“When Cuban women obtain business management positions, they and their families are economically empowered,” Virgilí said. “The potential of women in that sector is not being fully exploited, even though they graduate from their higher education studies with better grades than their male counterparts.”

Cuba’s public enterprises need to make changes to fully incorporate women, she said. “We find women in an identity crisis because they feel like they need to become men when they become managers and executives, and they encounter serious difficulties in reconciling their work and home lives,” she added.

The changes that she proposed include: less masculinised management styles, a ban on the extended workday, advocating women for management jobs, gender training, and recreational activities for personnel that include families.

In addition, more changes are needed for working toward gender equality within families, changing sexist mentalities, and ensuring better services for the care of children and the elderly, Virgilí said.

But not all women managers have the same story.

Consuelo Díaz, an oil industry manager, told IPS that she experienced “certain moments” of discrimination when she started her business career. “But following my own firm ideas, without losing sensitivity or respect, day after day gave me key elements for success.

“I’m very demanding when it comes to quality work performance, but I never allow mistreatment or rudeness. I have never used profanity in addressing my workers,” said Díaz, an economist who has worked for almost 30 years in different management jobs in a liquefied gas plant, where most of the employees are men.