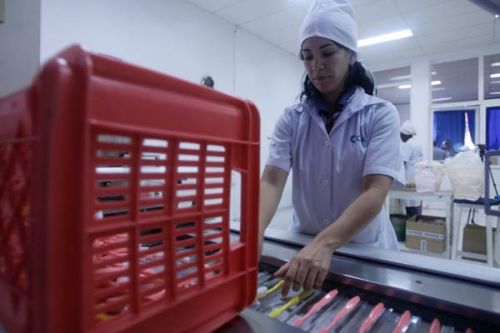 The economic reforms in Cuba have different impacts on men and women. Credit: Jorge Luis Baños/IPS

HAVANA, Sep 3 2012 (IPS) - Beatriz Lemes took her time deciding, and finally agreed “apprehensively” to take the job of heading a state-run company that is making the transition to financial autonomy, a system that is spreading throughout Cuba and is testing women’s capacities, among other things.

“Self-financing can work, but there is a need to change people’s mentality. They need to feel like their work belongs to them,” said Lemes, who is deputy economic director of the Territorial Station of Agricultural Engineering in the provinces of Mayabeque and Artemisa, both of which adjoin Havana.

Now, with “more responsibilities, demands and stress,” this accountant with 30 years’ experience expects new challenges for her staff when their company stops receiving state funds in early 2013. “My workers are highly trained, but for those of us who are women, it is harder because of the domestic burden,” she told IPS.

The sweeping economic reforms that began to be introduced in Cuba in 2007 are having different effects on men and women. While the measures adopted are not discriminatory on the basis of gender, they do not necessarily present opportunities for women, according to researchers Dayma Echevarría and Teresa Lara.

For more than 50 years, the bulk of Cuba’s labour force was employed by the state. The changes ushered in by the government of Raúl Castro include redefining policies for social assistance and the role of the state, which formerly guaranteed full employment and a basic wage.

The National Office of Statistics and Information (ONEI) reported 2,514 workplaces as state-financed in 2010, out of a total of 11,857 economic entities in the country. The state-financed figure dropped the following year, when only 2,455 of 10,963 entities received public funds. Also, several state companies are involved in experiments in increased autonomy.

Lemes, who is 49 and divorced with two adult daughters, said that one of her conditions for accepting the job of deputy director was “not to have anyone in charge of me.” She noted that “sometimes I have to stay after hours and I have to demand more of my staff. Now I am the one responsible if we have losses.”

Working overtime and making oneself available at all hours are behaviours that are “costly for women, given that the roles of caregiver and administrator at home and in the family continue to fall on them,” says an article about the impact of reforms on women written by Echevarría and Lara.

However, Cuban women with paid work have higher educational levels than men, the researchers noted. In late March of 2011, women accounted for 63 percent of technical personnel and professionals. Their high skill levels could pave the way to greater economic independence.

Although she had envisioned long days sitting in a laboratory, biochemist Lissy Rosabal, 26, pulls on her tall rubber boots several days a week to go into the countryside. “My work involves being there to evaluate and monitor experiments in Cuba’s intense climate. But it has its gratifications,” she told IPS.

“Farmers, men and women, learn from me and get better yields. At the same time, I learn from them and obtain scientific results,” said Rosabal, who works in research at the state-run National Institute of Agricultural Sciences in Mayabeque.

Her profession has a future because agriculture is a key sector in the economic reforms. Part of her income depends on her own efforts to come up with ideas for research projects and obtain financing, she said.

“I’ve had to learn about economic management. We do everything from the scientific conception of a project to the preparation of invoices for buying the supplies requested,” she said.

Specialists at the institute, which is state-financed, submit their research proposals to apply for funds and national and international scholarships, which provide income in addition to their wages. “I have not felt at risk of being unemployed. However, this year it has been difficult to get projects, because the number of calls for proposals was reduced,” she commented.

In addition, authorities are opening up more spaces to private enterprise. For instance, in 2009, barbershops and hairdressing salons began to be leased to workers.

The list of authorised self-employment activities grew to 178 in 2010, and self-employed individuals may now rent small establishments for food and beverage services.

The goal is to increase the number of private sector workers this year by 240,000.

But women continue to be a minority in this sector, which enjoys broad financial autonomy. As of September 2011, women represented just 12.5 percent of 229,205 people involved in private enterprise, according to the most recent statistics broken down by gender.

In their article, Echevarría and Lara said that “there is differentiated access for productive assets, such as land, housing and capital,” with women at a disadvantage. “Considering the educational levels achieved by women, it may be that these activities are not very attractive to them,” the article said.

Authorised private work comprises basic and traditional activities such as food preparation and sale, the production of artisan goods, passenger and freight transport, repair and maintenance of equipment and others involving a predominance of what experts describe as traditionally masculine activities.

After more than a decade of making purses, leatherworker Hilda Zulueta took advantage of the expansion of private work and joined the list of 371,000 people who were officially self-employed as of February 2012. Her brand of handmade leather purses, Zulu, could take off when her idea for a workshop-boutique comes to fruition.

With the economic crisis that began in the early 1990s and is still affecting Cuba, Zulueta, a math teacher, and her family began gathering scraps of leather that were discarded by the shoe factory in her Havana neighbourhood, Alamar.

She began in 1992 “with what I had at home and a lot of imagination,” she told IPS. Little by little, she gained experience and acquired “all of the necessary tools,” and she met a tanner who “does wonderful work.”

“I did not need start-up capital, something that is now essential, and I did not leave my job as a teacher,” said Zulueta, who is now 61 and retired, and who says her daughters and granddaughters will take over her business.