Young Cubans Unsure Where to Turn for Decent Jobs 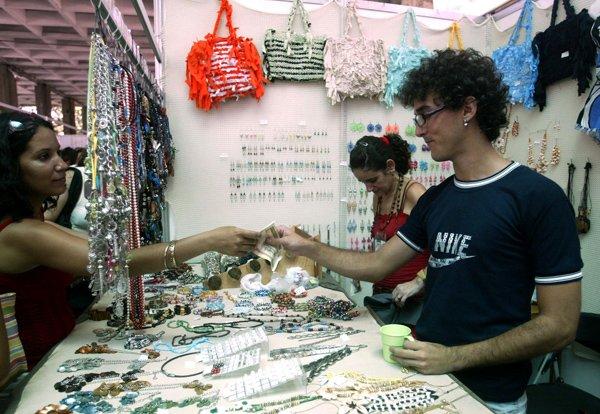 HAVANA, Apr 14 2011 (IPS) - In the throes of Cuba’s economic “reorganisation,” young people are walking a tightrope towards an uncertain employment future. They are finding it increasingly difficult to find jobs that meet both their professional aspirations and their salary expectations.

The government of President Raúl Castro launched economic reforms last year that include massive lay-offs of public employees, potentially affecting one million people by the end of 2011. “Young people are among the most vulnerable when it comes to getting a new job,” Yonnier Angulo, a 25-year-old university professor, told IPS.

Expanded opportunities for self-employment are among the options proposed by the government in response to the high demand for jobs. Large numbers of workers are needed in agriculture and construction, but the majority of jobseekers find these sectors unattractive.

According to the National Statistics Office, the unemployment rate in Cuba in 2009 was only two percent for women and 1.5 percent for men, but this will be radically changed by the decline in public sector employment.

“The impact of the labour adjustment measures on youth must be monitored,” sociologist María Isabel Domínguez told IPS. Those who are clearly competent at their jobs will be kept on, but young people’s competence is often hard to assess. On the one hand, they tend to be better qualified, but on the other they lack work experience, she said.

Fanny Morales, a 27-year-old factory worker, has unhappy memories of a period of job insecurity lasting, in her case, two-and-a-half months. She was on the brink of unemployment when staff reduction measures reached her workplace, a paper factory in Mayabeque province, adjacent to Havana. Now she has been reassigned to another of her company’s factories, and is greatly relieved.

“I’m glad to have a job,” Morales told IPS. She is paid the minimum wage, 225 Cuban pesos (nine dollars) a month. She hopes that when she completes her degree as an agronomist, her job prospects will improve.

Students who “are finishing university courses are extremely anxious about their employment future,” said Angulo. Recent graduates are not included in the new restrictions on hiring in the public sector, so that they can gain on-the-job learning experience. To do otherwise would mean sacrificing the immediate future, President Castro said last year.

The challenge to young people in Cuba is mirrored in many parts of the world. Last year, about 6.7 percent of the 104.2 million young people of working age in Latin America and the Caribbean were unemployed, according to the International Labour Organisation (ILO).

For some time, young people in Cuba have created their own employment niches outside the sphere of the state. Two years after finishing a degree in history at the University of Havana, Yaimelis Acosta did not have a clue about what she would do next. “I always thought I would be an academic researcher,” she said.

“My expectations for the future were focused on what the university could provide,” she told IPS. What she was offered at the time did not give her an opportunity to delve into her passion: research on gender relations. Now, at the age of 24, she has become a “freelance producer.”

Independent film and video companies headed by newly-minted professionals have sprung up, like Producciones de la 5ta Avenida, created in 2004, which is registered in Bolivia and operates in Cuba. But the government’s more open vision of private employment does not yet extend to this kind of enterprise.

Official self-employment opportunities are limited to small businesses like cooking and selling food, and do not cater to the full range of interests. “Young people have many expectations that have yet to be fulfilled,” Acosta said.

However, work has been low down on the list of life priorities for Cuba’s young generations since the 1980s, according to Domínguez, who is head of the Centre for Psychological and Sociological Research (CIPS). “It is extraordinary how immutable employment aspirations are,” she said.

They have remained constant in times of bonanza like the 1980s, times of economic crisis like the 1990s, and at present, when the work ethic is making something of a comeback. “The present context is bound to shake up society’s previous ideas about acceptable employment,” she said.

Meanwhile Natividad Guerrero, head of the Centre for Youth Studies (CESJ), pointed out that young people “have a very selective attitude towards employment.” She said many young people who are laid off by the state prefer to look for a new job in emerging areas of the economy, like foreign companies.

“Some of them receive remittances (from abroad), which cover their monetary needs,” she told IPS. But others, even though they have no steady income, “are choosy and want neither to work nor to study.” They are not interested in the majority of available jobs, which nowadays are mostly in unpopular areas like construction, agriculture, or maintenance and public works, Guerrero said.

A young high school graduate who requested anonymity said he had worked at a dozen different trades, including as a security guard, pharmacy technician and printing shop worker, “getting by” for three years in a series of casual jobs.

Now he sees a chance of making more money on the black market, selling clothes, computer parts or any product he can lay his hands on, appropriated from state institutions or brought in from abroad. “I have looked at other options, but I don’t want to start working at just any old job,” he said.

However, this 27-year-old hasn’t closed his mind to the possibility of taking a steady job, although at employment offices he has only found offers of construction work. “It’s very hard work and it’s poorly paid,” he said. Recently, he applied to work as a dock hand at the port in Havana. “They say it’s very well paid,” he said.