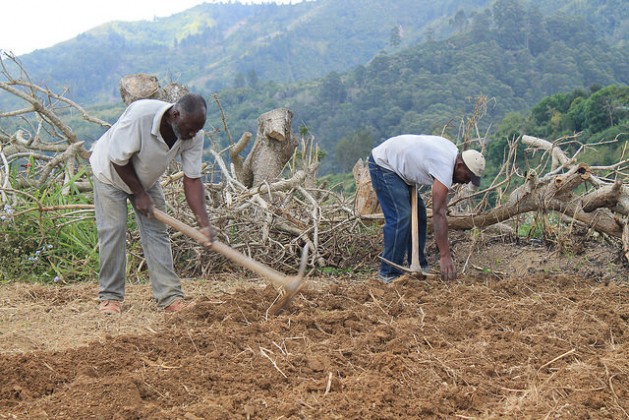 Big data is used by scientists in the Caribbean to forecast drought conditions for farmers and other farming interests. Credit: Zadie Neufville/IPS

KINGSTON, Jamaica, Mar 11 2017 (IPS) - On Nov. 30 last year, a new high-performance ‘Super Computer’ was installed at the University of the West Indies (UWI) during climate change week. Dubbed SPARKS – short for the Scientific Platform for Applied Research and Knowledge Sharing – the computer is already churning out the ‘big data’ Caribbean small island states (SIDS) need to accurately forecast and mitigate the effects of climate change on the region.

Before SPARKS, regional scientists struggled to produce the kinds of credible data needed for long-term climate projections. Only a few months ago, UWI’s lack of data processing capacity restricted researchers to a single data run at a time, said Jay Campbell, research fellow at the climate research group . Each data run would take up to six months due to the limited storage capacity and lack of redundancy, he said noting: “If anything went wrong, we simply had to start over.”

Immediately, SPARKS answered the need for the collection, analysis, modelling, storage, access and dissemination of climate information in the Caribbean. Over the long term, climate researchers will be able to produce even more accurate and reliable climate projections at higher spatial resolutions to facilitate among other things, the piloting and scaling up of innovative climate resilient initiatives.

So, when the Intergovernmental Panel on Climate Change (IPCC) produces its next global assessment report in 2018, there will be much more information from the Caribbean, making SPARKS a critical tool in the region’s fight against climate change.

Not only has the new computer – described as one of the fastest in the Caribbean – boosted the region’s climate research capabilities by plugging the gaping hole in regional climate research, UWI Mona’s principal Professor Archibald Gordon said, “It should help regional leaders make better decisions in their responses and adaptation strategies to mitigate the impact of climate change”.

The experts underscore the need for “big data” to provide the information they need to improve climate forecasting in the short, medium and long term. Now, they have the capacity and the ability to complete data runs that usually take six months, in just over two days.

The system will help scientists to better “evaluate potential risk and impacts and effectively mitigate those risks as we build more resilient infrastructure,” Gordon said.

As the World Meteorological Organisation (WMO) reported in June 2016 as “the 14th consecutive month of record heat for land and oceans; and the 378th consecutive month with temperatures above the 20th century average,” regional scientists have committed to proving information to guide Caribbean governments on the actions they need to lessen the impact of climate change.

The region has consistently sought to build its capacity to provide accurate and consistent climate data. Efforts were ramped up after a September 2013 ‘rapid climate analysis’ in the Eastern Caribbean identified what was described as “a number of climate change vulnerabilities and constraints to effective adaptation”.

The USAID study identified among other things “the lack of accurate and consistent climate data to understand climate changes, predict impacts and plan adaptation measures”. To address the challenges, the WMO and the Caribbean Institute for Meteorology and Hydrology (CIMH), with funding from USAID, established the Regional Climate Centre in Barbados.

The launch of the new computer is yet another step in overcoming the constraints. It took place during a meeting of the IPCC at UWI’s regional headquarters at Mona – significant because it signalled to the international grouping that the Caribbean was now ready and able to produce the big data needed for the upcoming 2018 report.

Head of the Caribbean Climate Group Professor Michael Taylor explained in an interview that the credibility and accuracy of climate data require fast computer processing speeds, fast turn-around times as well as the ability to run multiple data sets at higher resolution to produce information that regional decision-makers need.

“Climate research and downscaling methods will no longer be limited to the hardware and software,” he said, trying but failing to contain his excitement.

SPARKS also puts Jamaica and the UWI way ahead of their counterparts in the English-speaking Caribbean and on par with some of the leading institutions in the developed world. This improvement in computing capacity is an asset for attracting more high-level staff and attracting students from outside the region. Crucially, it aids the university’s push to establish itself as a leading research-based institution and a world leader in medicinal marijuana research.

“This opens up the research capability, an area the university has not done in the past. Before now, the processing of big data could only be done with partners overseas,” Professor Taylor said.

Aside from its importance to crunching climate data for the IPCC reports, SPARKS is revolutionising DNA sequencing, medicinal, biological and other data driven research being undertaken at the University. More importantly, UWI researchers agree that a supercomputer is bringing together the agencies at the forefront of the regional climate fight.

What is clear, SPARKS is a “game-changer and a big deal” for climate research at the regional level and for UWI’s research community.