KATHMANDU, Jul 3 2017 (IPS) - “Reconstruction and reconciliation require finances and physical structure, but the families of the victims of the conflict first and foremost need their integrity protected. Physical and financial compensation mean little without justice,” wrote Suman Adhikari nearly 11 years ago, during a ceasefire in Nepal’s Maoist insurgency.

The conflict ended later that year, leaving 17,000 dead over a decade, including Adhikari’s father. A teacher and headmaster in Lamjung district, he and his fellow teachers in January 2002 refused Maoist demands to hand over 25 percent of their salaries. Days later, cadres seized him as he was teaching a Grade 10 class, bound his hands and legs, and dragged the man out of the school to a forest, where he was stabbed in the stomach and shot in the head. His body was left tied to a tree.

“Many victims have been unable to get on with their lives. They are frustrated and suffer from psychological trauma." --Suman Adhikari

Soon after, Suman returned to the capital Kathmandu, where he began talking to other conflict victims about their own horrible experiences. They met with civil society organisations and political leaders, created an organisation and submitted their demands to political leaders then crafting the Comprehensive Peace Agreement (CPA).

Today, as chairperson of the Conflict Victims Common Platform, Suman finds himself repeating many of the same requests.

One of the Common Platform’s main demands is that the government provide needs-based compensation to victims. The state has paid most of them Rs 500,000 (4,834 US dollars) as interim relief since the conflict ended but Adhikari says one-off payments can’t replace many of the breadwinners who families lost; without them, many are still struggling to find sufficient work or pay school fees.

“Many victims have been unable to get on with their lives. They are frustrated and suffer from psychological trauma,” he says. 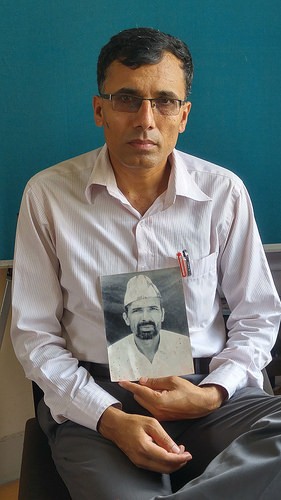 While society moves on, with, for example, the political leader who was prime minister three times during the insurgency taking over as PM again last week from former Maoist supremo Prachanda, victims are being forgotten, Suman says. “They still haven’t had the chance to speak of their pain properly, from the heart.”

A recent report found that victims have diverse demands for ‘truth’. Prepared by the Nepal office of the International Centre for Transitional Justice and local think-tank Martin Chautari from recent interviews with victims, it noted that many people needed closure and an end to their ambiguous losses. “Our people will come home today or tomorrow. We watch the roads,” said one woman in Bardiya, the district that had the most disappearances during the conflict.

Recognition is also a common wish, Aileen Thomson, head of ICTJ Nepal, told IPS. “They feel that the violation happened because of their membership in certain communities … a lot of times violations perpetrated by the State were because of perceived associations with the Maoists, which was really tied to identity and community and where you lived.”

The survivors want society to know that their kin were innocent victims, caught in the crossfire, adds the report.

Just as victims’ demands varied, civil society also had different ideas about what transitional justice should achieve, says Mandira Sharma, co-founder of Advocacy Forum, an NGO that filed numerous court cases for conflict-era crimes. But those theoretical discussions were shelved when it became apparent that political leaders from both sides were hoping to use the process to avoid prosecutions, adds Sharma, who is now doing a PhD in human rights and law.

Instead, Advocacy Forum and other groups continued to take cases to court. After victims received their interim relief, “You could have closed the chapter forcing victims to be quiet with that, but that would have been temporary: this deep sense of injustice would have remained,” Sharma says.

“In that past that’s what we did (using commissions formed after earlier political milestones like Nepal’s return to democracy in 1990). That hasn’t helped us to heal, that hasn’t helped us to improve the justice system, to correct the sense that certain people are always above the law. And there’s a very deep sense of inequality in our system because of this. We identified this as something we had to fix.”

Today though, transitional justice appears at a near standstill. The government created truth and disappearances commissions in 2014, but the legislation was severely criticised on several fronts. The Supreme Court later struck down a provision that grants amnesty for serious human rights violations.

Human Rights lawyer Raju Chapagain says that while the laws creating the bodies must be amended, the truth commission could be making efforts to advance transitional justice, which would also help to diminish a strong sense of scepticism about the body. “Nothing is preventing them inquiring into human rights violations. Commissions have powers equivalent to courts; they have adequate powers in terms of inquiries,” he says.

By taking action the commission could overcome its “credibility gap,” Chapagain adds, but it has failed to date, in part because it hasn’t engaged with victims.

The truth commission opened its office in Pokhara, west of Kathmandu, this week, one of seven regional centres, but Adhikari says the body still refuses to engage with victims. “The commissions are not good, the appointments are political, the commissioners are new to this: they should at least have a willingness to learn and to collaborate – but they don’t listen to us.”