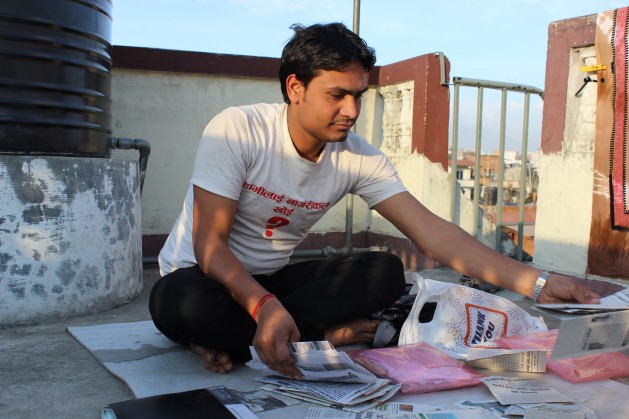 KATHMANDU, Mar 10 2014 (IPS) - Around 4.3 million of Nepal’s 27 million population lack citizenship documents, rendering them stateless, says a report by the Forum for Women, Law and Development (FWLD), which works to promote and protect the interests of Nepali women.

Today in Nepal one cannot register birth, file for a change of address, buy or sell land, acquire a passport, open bank accounts, sit for higher-level examination, register to vote or even get a mobile phone card without citizenship documents.

"Our constitution and law are essentially saying a Nepali man can marry anyone and his child will be Nepali but if a woman marries a foreigner, her child will have problems getting citizenship."

“Citizenship identification is the fundamental piece of document which connects an individual to the state. Without it a person has no proof of existence,” says lawyer Sabin Shrestha of FWLD.

In 2006, Nepal had passed the Citizenship Act, which guaranteed Nepali citizenship to children born to a Nepali mother or a Nepali father. Nepal’s 2007 interim Constitution and a 2011 Supreme Court directive backed the Act.

But in 2012, things became tougher. The Constituent Assembly members drafted a new provision, which stated that Nepali citizenship would be granted only to those who could prove that their mother and father both were Nepali citizens.

Getting citizenship through the mother, however, is particularly difficult.

Nepal went from requiring citizenship of just the father before the 2006 citizenship law was passed, to that of either mother or father, and to meeting widely enforced requirements now for both mother and father. However, this requirement has not been fully written or passed.

Besides, the, 2006 citizenship law provisions often get lost when they reach the Chief District Officer (CDO) level. The CDO can in effect grant citizenship to whoever he pleases.

Arjun Kumar Sah, 24, was born in Nepal to a Nepali mother and Indian father and has lived in the country all his life. When Sah turned 16, he applied for citizenship but was told that he couldn’t because his father is not Nepali. After the Citizenship Act was passed in 2006, Sah went back to apply through his mother’s name but was denied again.

Early last year Sah filed a writ petition in the Supreme Court against the Home Ministry, the District Administration Office and the Office of the Prime Minister demanding citizenship through his mother. “The Supreme Court sent a letter asking the three why I have not been granted citizenship even though my mother is Nepali, but it has been nine months and I am yet to receive a reply,” Sah tells IPS.

“Nepal’s Constitution and law have made getting citizenship through the mother a conditional right, attaching citizenship to a Nepali father and making the role of women useless,” lawyer Sushama Gautam tells IPS.

Advocate Dipendra Jha, who is fighting Sah’s case, says the new provision is regressive, and against the spirit of democracy and the idea that all citizens are equal.

“If we look at it from the gender angle, you see a huge disparity – our constitution and law are essentially saying a Nepali man can marry anyone and his child will be Nepali but if a woman marries a foreigner, her child will have problems getting citizenship. What kind of equality is that?”

Deepti Gurung has two daughters. She wants to register their birth so they can become citizens, but every time she is at the local ward office or at the CDO office, they ask her to identify the father.

“I raised my daughters by myself, I cared for their needs, I worry about their future, and the father abandoned them when they were young. So why is the government trying to bring him back in the picture?” Gurung asks. She says that not providing citizenship through mother is the biggest form of violence against women.

Gurung argues that a lot is left to the discretion of the CDO. When a Nepali citizen comes of age, the village committee recommends him or her to the district administration office, and the CDO eventually authorises and grants citizenship. “A lot depends on how sensitive the CDO is to that particular case,” says Gurung.

Activists say there may be more people being denied citizenship in little pockets, especially in southern Nepal because of the open border and cross marriages between India and Nepal, but citizenship is a national problem.

“It is especially prevalent among economically disenfranchised families,” says Jha. “Sah’s father never applied for citizenship because he ran a small business and didn’t really need government services but his children are living in a different world where citizenship documents are needed to access all kinds of services.”

Sah is studying for a Masters in Business Administration in Kathmandu. “I am graduating soon, how will I find a job without citizenship papers?” Sah asks.

The number of stateless people is growing every year. “This problem is multiplying because stateless people are giving birth to children who simply cannot apply for citizenship,” says FWLD’s Shrestha.

Discussions in Nepal around citizenship often get linked to issues of sovereignty and national security, especially in relation to Nepal’s open border with India.

But, asks Jha, “Should we be worrying about another country taking over Nepal when we have 4.3 million stateless people inside our own country that we don’t know what to do with?”

Srijana Chettri of the Asia Foundation, Nepal, argues, “You have to think about the risks and vulnerabilities that a stateless person faces – whether it is trafficking, exploitation, abuse or fraudulent migration.”

After months of political uncertainty, Nepal elected a new Constituent Assembly in November 2013 to write the Constitution. Activists say this is the right time to lobby for change in the rigid regulations regarding citizenship.