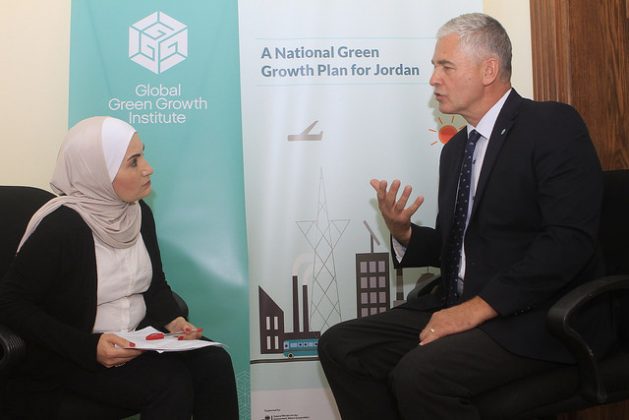 AMMAN, Aug 10 2017 (IPS) - Jordan may be one of the smallest economies in the Middle East, but it has high ambitions for inclusive green growth and sustainable development despite the fact that it lies in the heart of a region that has been long plagued with wars and other troubles, says the Director-General of the Global Green Growth Institute (GGGI) Dr. Frank Rijsberman.

In a wide-ranging interview with IPS, Rijsberman stressed that Jordan has shown a strong commitment towards shifting to a green economy, and has made significant strides in the area of renewable energy.

The demand for water and energy is increasing due to the influx of more than one million Syrian refugees.

Following months of intensive cooperation with GGGI, the government of Jordan – represented by the Ministry of Environment with contributions by line ministries and other stakeholders – launched its National Green Growth Plan (NGGP) in December 2016, Rijsberman said.

Highlighting GGGI’s key role in helping Jordan launch its NGGP and develop a clear vision towards green growth strategy and policy framework in line with the country’s vision 2025, Rijsberman said that his institute will also play a critical part in mobilizing funds and investments to enable green growth.

Rijsberman, who is currently visiting Amman to check on projects funded and implemented by GGGI and the German government, underscored Jordan’s accelerated steps towards preserving its natural resources, leading the country into a sustainable economy, fighting poverty and creating more jobs for young people.

Rijsberman told IPS that the NGGP, which was approved by the cabinet, lists 24 projects in six main sectors, including water, agriculture, transport, energy, waste and tourism, the most pressing of which are water and energy, two of Jordan’s most limited resources.

The demand for these two resources is increasing due to the influx of more than one million Syrian refugees, Rijsberman said, adding that the GGGI water projects take into consideration that Jordan is one of the world’s poorest countries in terms of water. According to World Bank data, the availability of water per capita stands now at 145 m3 /year but is projected to decline to 90 m3 /year by 2025.

“In terms of water, our projects in Jordan aim to preserve the country’s efficiency of water distribution system, provide clean drinking water, maximize the use of treated wastewater for agricultural and industrial purposes and prevent pollution by cleaning some of the polluted rivers,” he told IPS.

Rijsberman, who is also an expert in water issues, revealed that one of the GGGI’s important near future projects in Jordan is the “Master Plan for Cleaning and Rehabilitation of Zarqa River Basin,” a heavily polluted river located 25 kilometers east of the Jordanian capital Amman.

The GGGI also works to address Jordan’s energy challenges, Rijsberman said, adding that the Kingdom imports 97 percent of its energy needs, and its annual consumption of electricity rises by 5 percent annually.

“In the energy sector, our primary focus is on the efficiency of this resource, since Jordan has already made good progress in setting up solar energy plans, and the need lies on storing this energy,” he said.

During his visit to Jordan, Rijsberman said that he had talks with officials in the ministries of energy, environment and planning on ways to exploit solar energy for battery technology, another renewable technology that can store extra solar power for later use. This new technology, Rijsberman explained, will provide the country with the opportunity to shift to renewable energy and reduce imports of fossil fuels.

As Jordan faces new geopolitical challenges and an unprecedented influx of refugees, Rijsberman revealed that GGGI is working with government on a Country Planning Framework (CPF), which is a five-year in-country delivery strategy that identifies and operationalizes the institute’s value additions to national development targets in partner countries.

As a strategic and planning document, the CPF aims at delivering in-country development targets that are in alignment with the overarching GGGI Strategic Plan and Corporate Results Framework. It also elaborates a clear and logical assessment of development challenges and enabling conditions, identifies GGGI’s comparative advantage in country and sets priority interventions, he explained.

In Jordan, he explained, there is political will and determination to create green jobs, green businesses, a healthy environment, and secure and affordable supply of energy for all. What the country lacks is the capacity and technical skills as well as adequate financing mechanisms to encourage the private sector to implement green growth projects.

“So a big part of our job is capacity-building to come up with bankable projects that are green and sustainable, and as we know that the government can’t fund projects by itself, therefore it is very important to build partnerships between the private and public sector to reach this end,” the DG told IPS.

According to official data, four workshops were organized in 2016 to enhance capacity among green growth stakeholders in Jordan. A total of 177 participants attended these workshops in Amman, Jordan, and Abu Dhabi, and the UAE. Eighty-two percent of participants responded to surveys conducted after the workshops, indicating an improvement in their knowledge and skills as a result of their participation.

Rijsberman stressed that although Jordan has made tremendous progress in its approach, there is still a long way to go and a lot of work to do.

Despite accelerating degrees of environmental degradation and depletion of resources in the region because of wars, poverty and high unemployment, the GGGI official said he was impressed by how rapidly some Arab countries such as the UAE and Qatar are shifting towards green growth.

The concept of green growth is starting to take hold in the region, Rijsberman said, adding that there is a sustainability week held annually Abu Dhabi, the GGGI has offices in Masdar city in UAE, Jordan started implementing its National Green Growth Plan and the Arab League has requested to share this plan be with its 22 members.