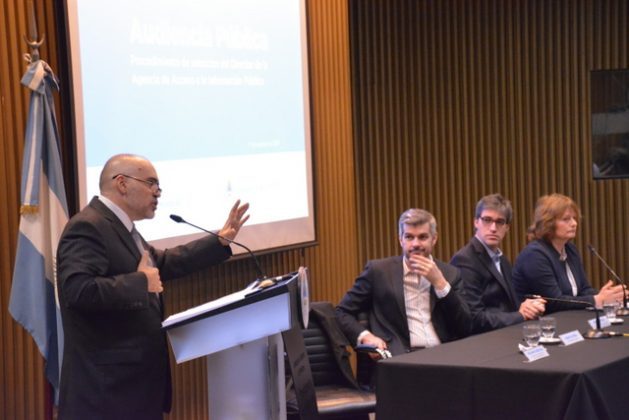 The director of the new Agency for Access to Public Information in Argentina, Eduardo Bertoni – a former IACHR special rapporteur for Freedom of Expression - presented his plans at the Aug. 17 public hearing where his appointment was discussed. Credit: Chief of the Cabinet of Ministers

BUENOS AIRES, Sep 28 2017 (IPS) - After 15 long years of public campaigns and debates in which different political, social and business sectors held marches and counter-protests, Argentina finally has a new law that guarantees access to public information.

This step forward must now be reflected in reality, in this South American country where one of the main social demands is greater transparency on the part of the authorities.

The Law on the Right of Access to Public Information, which considers “all government-held information” to be public, was approved by Congress in September last year and enters into force Friday Sept. 29.

Eduardo Bertoni stressed the importance of the new law. He is the academic appointed by the government of President Mauricio Macri to lead the new Agency for Access to Public Information, which will operate within the executive branch, although “with operational autonomy,” according to the law.

“There are already 113 countries that have right of access to information laws and 90 countries have incorporated it into their constitutions,” Bertoni said during the public hearing where his appointment was discussed.

Bertoni, a lawyer with a great deal of experience regarding the right to information, served as Special Rapporteur for Freedom of Expression of the Inter-American Commission on Human Rights (CIADH) between 2002 and 2005.

“We must now encourage society to demand more information from the authorities. And it is essential to push for better organisation of the public archives, because if we do not find the information people seek, we will fail,” he added.

The text is broad in terms of the list of institutions legally bound to respond to requests for access to information: besides the various branches of the state, it includes companies, political parties, trade unions, universities and any private entity to which public funds have been allocated, including public service concessionaires.

The Agency was created to ensure compliance with the law. Its functions include advising people who seek public information and assisting them with their request.

“This was clearly a pending issue for Argentina. It is incomprehensible that the governments of Néstor Kirchner (2003-2007) and Cristina Fernández (2007-2015) did not push for approval of this law, which should be an incentive for provinces and municipalities to do the same, since very few have regulations on access to public information,” Guillermo Mastrini, an expert on this question, told IPS.

For Mastrini, a former director of Communication Sciences at the University of Buenos Aires, “this does not change the worrying scenario with respect to the right to information, since the government is regulating by decree issues related to audiovisual communication services in a way that does not favor plurality and transparency.”

The bill was sent to Congress by the government a few months after Macri took office in December 2015, and passed with large majorities in both legislative chambers.

Until now, at the national level, there was only decree 1172, signed in 2003 by Kirchner with the aim of “improving the quality of democracy”, which was not only below the status of a law, but only covered the executive branch with regard to the obligation to provide information.

José Crettaz, a journalist and the coordinator of the Center for Studies on the Convergence of Communications, told IPS that “Néstor Kirchner’s decree, which applied to the executive branch, worked very well at first, but then public officials began to leave most requests for information unanswered.”

“Now we are seeing a huge step forward, since the law encompasses all branches of the state, and I see a government with a different attitude. The decisive thing will be how the law is implemented. The only valid criterion should be: if there is public money involved, it is public information,” he said.

The law was passed after dozens of bills on access to information were introduced in Congress in recent years. The first was presented under the government of Fernando de la Rua (1999-2001), with the support of a network of civil society organisations, but with little backing from journalists.

The initiative obtained preliminary approval from the lower house of Congress in 2003, passed to the Senate and then the main Argentine media outlets joined the public campaign demanding that it be approved. However, they later distanced themselves from the bill.

They did so, Bertoni recalled in a paper written in 2011 for the World Bank, when a senator warned that the media should also respond to requests for information submitted by any member of the public, as they receive state advertising, which is considered a subsidy.

In 2004, the Senate approved the bill, but with modifications that included private entities among the subjects obligated to provide information, and sent it back to the lower house, where it was shelved. Another bill was passed by the Senate in 2010, but it also failed to prosper.

Now one thing that stood out is that just two days before the law went into effect, the government modified it through a questioned channel: based on “a decree of necessity and urgency”, putting the new Agency in the orbit of the chief of the cabinet of ministers.

“The government thus gave a lower status to the Agency, which according to law was to depend directly on the Presidency of the Nation; the decision, moreover, cannot be taken by decree when Congress is in session,” said Damián Loreti, professor of Right to Information at the University of Buenos Aires.

“That the law is in force is good. But I am concerned about a number of things, such as not including among its objectives a guarantee for the exercise of other rights, such as housing or sexual and reproductive rights. The model law of the Organisation of American States was not followed,” he told IPS.

For Sebastián Lacunza, the last director of the Buenos Aires Herald, a well-respected English-language newspaper that closed this year, “in a country that does not have a culture of transparency, there is a risk that the law will fail.”

“This government promised a regeneration of the country’s institutions, but in some aspects it ended up aggravating the shortcomings of the previous administration, which was not prone to being open with information,” he told IPS.

In his view, “in a context of global crisis in the media industry and a shrinking of plurality of information, the most important thing is that there is an active state that combats the concentration of the media in a few hands.”