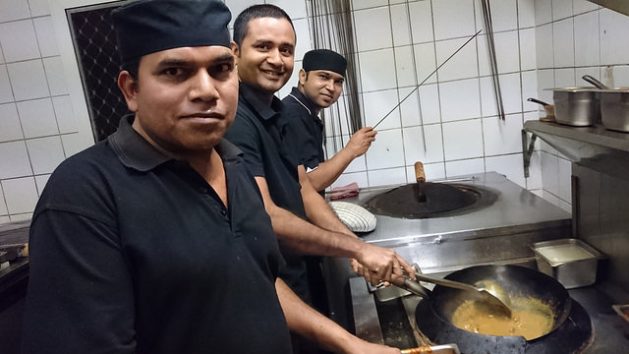 BROOME, Western Australia, Sep 29 2017 (IPS) - Julmat Khan migrated from the seaside resort town of Digha in West Bengal, India, about 14 years ago to the coastal tourist town of Broome in Western Australia. He is amongst a small proportion of international migrants to have settled in a regional town instead of Australia’s popular metropolises of Sydney and Melbourne.

Only 20 percent of international migrants settle in regional Australia, which is home to approximately one-third of the nearly 24 million populace. Often international migrants are seen as an option of last resort for regional communities that need more people, but the Canberra-based economic and political think tank, Regional Australia Institute (RAI), believes they should be the top priority.

Broome, renowned for pearling and home to the Aboriginal Yawuru people, has been a melting pot of cultures since the 1800s.

A father of three young children, Khan says, “The slow-paced lifestyle is similar to what I was used to back home and it is ideal for raising a family. My parents were farmers, but I trained as a chef. I have been running my own restaurants here, improvising on my mother and grandmother’s Bengali and Oriya cooking styles to create my own recipes.

“We grind our own spices and prepare our own paneer [Indian cottage cheese], which is a drawcard with the multicultural mix of locals and tourists. The number of visitors has been swelling with more cruise ships now sailing along the Kimberley coast, which is good for business.”

Broome, renowned for pearling and home to the Aboriginal Yawuru people, has been a melting pot of cultures since the 1800s. It has attracted migrants from Japan, China, Malaysia, Philippines, the United Kingdom, New Zealand, Germany, South Africa; and in recent years from Thailand and India. Indians comprised 4.8 percent of recent arrivals (2007-2016) in Broome, which has a population of 16,222 with the median age being 33 years, according to the Australian Bureau of Statistics’ 2016 Census.

RAI’s research, examining the latest 2016 Census data, found from 2011 to 2016, 151 regional Local Government Areas helped offset local population decline by attracting international migrants. For example, in the 2011 Census, Darwin had 45,442 people recorded as born in Australia and 19,455 born elsewhere. By 2016, the number of Australian-born locals had reduced to 44,953 and the number of overseas-born had increased to 24,961.

“By relocating to regional areas, migrants not only provide population stability and younger residents with family-building potential, they also build diversity in the local community and create new jobs. Importantly, they help fill labour shortages in both high [such as doctors and nurses] and low [workers in abattoirs and poultry plants] skilled occupations, where positions are unable to be filled by the local workforce alone,” according to RAI’s analysis.

The small, agricultural town of Nhill in the south-eastern state of Victoria, had been facing a declining working-age population. Over a five-year period, the economic impact of increased labour supply – with 160 Karen humanitarian migrants settling in the community – in terms of Gross Regional Product is estimated to be 41.5 million dollars in net present value terms, according to a joint Adult Multicultural Education Services and Deloitte Access Economics Report published in March 2015.

“Regional communities may initially attract a small settlement group. Once they start to see some success, the process can begin to ‘snowball’, with both the community and the initial migrants helping encourage others to move to the area,” according to RAI’s The Missing Migrants report.

“Shifting the settlement of international migrants however is not primarily about numbers. It is about enabling regional communities to access people with the vital skills and resources they need to ensure their future. Furthermore, it can result in much better outcomes for migrants – especially those who come from agricultural backgrounds and would much prefer to live and work in rural areas than in metropolitan cities,” the report says.

Since 2004, the Australian Government has been providing incentives to skilled visa applicants who move to regional areas. Australia’s First Assistant Secretary, Immigration and Citizenship Policy, David Wilden says, “The Government encourages all migrants to explore Australia and seek residence and employment in regional areas. We work closely with regional authorities and State and Territory Governments to develop specialised migration programs that help fill skill shortages, boost the local economy and attract migrants to regional Australia.”

“The programs developed by the Department of Immigration and Border Protection are flexible, designed to address the special circumstances of rural and regional Australia, and include concessions for regional employers,” Wilden tells IPS.

Most migrants prefer big cities because they are perceived to provide better access to education, employment and health services; and where they are more likely to find people from their cultural and linguistic backgrounds.

The RAI report says. “To be successful in attracting and retaining international migrants, regional communities must work to ensure there are sufficient employment opportunities and availability of quality services and amenities (e.g. affordable housing, education, healthcare, public transport, childcare). In the past decade, there has been a particular focus on secondary migration to regional areas. That is, of relocating international arrivals from metropolitan areas to regional ones. This has been propelled by community partnerships with local businesses and local government initiatives.”

The International Organisation for Migration (IOM) offers a five-day Australian Cultural Orientation (AUSCO) program for refugees and migrants in Africa, the Middle East and North Africa, Southeast Asia, South Asia and Latin America. Funded by Australia’s Department of Social Services, the program has been delivered to over 80,000 people since its inception in 2003.

IOM’s AUSCO program manager Constanze Voelkel-Hutchison tells IPS, “AUSCO is the first step in a cultural orientation journey that continues with an onshore settlement program that starts after our clients arrive in their new home. We provide them with practical advice and information on the departure and resettlement processes.

“At the most basic level, this includes how to pack a suitcase and what to expect upon arrival in Australia. We also provide guidance on the many aspects of their settlement, including employment, education and health. Most importantly, we try to empower participants to become self-sufficient.”

But it is not always easy for international migrants to be accepted in their local regional communities. As Dr David Radford from University of South Australia’s Hawke-European Union Centre for Mobilities, Migrations and Cultural Transformations says, “International migrants, especially non-European background migrants, often also bring cultural, social and religious differences that regional communities, generally more tight-knit, traditional and conservative in nature, can find difficult to embrace.

“On the other hand, there is greater acceptance where international migrants are viewed as supporting population stability and regional growth through meeting employment needs and adding resources for the community.”