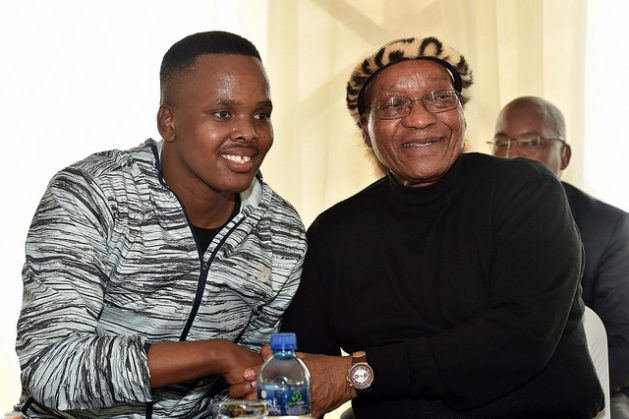 JOHANNESBURG, South Africa, Nov 28 2017 (IPS) - The crowd in the park gave out roars of approval as the next act was announced:  Mothusi Bashimane Ndlovu, one of Zimbabwe’s most popular singers and actors, who took to the stage with a small axe in hand.

It’s the trademark prop of his most famous role, Madlela Skhobokhobo: a Zimbabwean migrant struggling to make it in South Africa. The hearty artist, who now lives in Johannesburg, sent the crowd at Alec Gorschel Park in Hillbrow, Johannesburg, into a frenzy as he belted out one of his comical hits, “Bheyapeya.”

"During our shows, attended by both locals and migrants, we preach messages of tolerance. The idea is to build one Africa based on love and unity." --Mcasiseli Gwaza-Gwaza of Bayethe Music

Bashimane was one of many migrant performers spicing up Johannesburg’s Heritage Day celebrations in September, organized each year by Inqama, a wholly Zimbabwean youth cultural group headquartered in Johannesburg.

It was a social cohesion event, of sorts: nine years after South Africa experienced what was arguably its worst xenophobic violence, in which at least 62 people died, thousands were displaced and property worth millions of rands was either looted or destroyed during the attacks in May 2008. Attacks have taken place in several flare-ups since.

But the feel of events like the Heritage Day celebration reflects the attempts by average people on the ground to try and tame the scourge of xenophobia and foster social cohesion between locals and migrants.

While it has largely been seen as the duty of government officials and non-governmental organisations to bring migrants and locals together in peace-building initiatives, these promoters and musicians have seized the initiative. Operating on a low or zero budget, they have held musical shows, built inter-country fan bases for musicians, held inter-country tours, initiated collaborations and brought together some traditional, political and community leaders from the two countries.

There are 2.1 million migrants in South Africa, according to the 2011 census — about 4 percent of the “Rainbow Nation’s” population.

During a regional integration and migration trends briefings in 2015, the International Organisation for Migration (IOM) said these were a result of push factors that facilitated migration included lax border control, the long and porous borders, internal conflict and dysfunctional governments. Factors that exacerbated regional migration included trafficking in persons, smuggling drugs, arms and money laundering. Poverty was identified as a major push factor.

The largest percentage of migrants in South Africa are said to be Zimbabweans, many of whom are fleeing economic crisis and political repression.

It therefore comes as no surprise that Zimbabwean musicians and music promoters are always at the forefront of organising shows of this nature.

“We have seen it as imperative for locals and migrants to come together in celebratory events, which will build familiarity among different nationals and bring them closer to one another,” said Mcasiseli Gwaza-Gwaza of Bayethe Music, a fledgling music promotions company.

“Usually, xenophobia flares because of problems that affect ordinary South Africans, who then vent their anger on foreigners because they somehow believe migrants are the principal cause of their suffering. During our shows, attended by both locals and migrants, we preach messages of tolerance. The idea is to build one Africa based on love and unity. We therefore, believe it is our duty as promoters to use music to achieve that goal.”

Bayethe Music is just one of the many migrant-owned companies whose activities have brought together Zimbabwean and South African musicians in collaborative work. As a result, more than 20 collaboration songs and a number of festivals have been held by musicians from the two countries.

“Our main aim is to foster grassroots co-operation as a way to achieve social cohesion,” adds Gwaza-Gwaza. “Our events, which pull huge crowds comprising both locals and migrants. We also invite community leaders, politicians and traditional leaders from all over Africa to come and give messages themed around the spirit of Ubuntu (humanity).”

Their efforts are bearing fruit. A number of migrant Zimbabwean musicians are now being recognised by South African promoters, with Zimbabwean maskandi (Zulu traditional music) singers like Zinjaziyamluma, Amabhukudwana, Amachwane Amahle and Insukamini among those that have been a permanent fixture at musical shows previously reserved for South Africans.

As fans continue to warm up to inter-country relations, popular South African maskandi musicians like Igcokama Elisha and Khuzani Mpungose now have Zimbabwean chapters of fans dedicated to them.

“I have enjoyed friendship with many Zimbabwean maskandi singers based in South Africa and received a lot of support from music fans from that country,” said Manqele recently.

“This kind of co-operation has helped us bridge the divide between South Africans and migrants and most music fans are now as united as we wished when we first started this journey,” said Zinjaziyamluma’s manager, Mlungisi Tshabalala. “Both sets of musicians have been able to preach peace to their fans across nationalities.”

Zinjaziyamluma has collaborated with an array of South African acts that include Bonakele Myeza, Mlethwa Majola, Sebedlile Ntshangase, Kaptein, Khandalenja, Zanefa Ngidi, Mshovo and Gearbox Mtshali. Most of the songs preach the need for Africans to unite.

“We have also made great progress as Zinjaziyamluma, having had four branches of our South African fans established in Mnambithi, KwaNongoma, Ethekwini and Mhlathuze, in the KwaZulu-Natal province. We have also taken some of the South African musicians we work with to Zimbabwe every December and this has helped a great deal in fostering co-operation.”