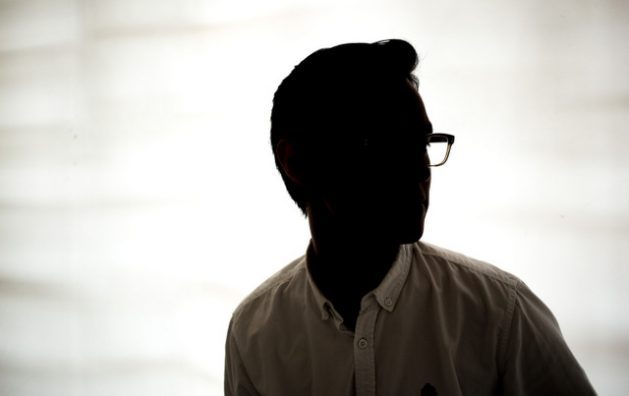 Daniel (not his real name), is a Venezuelan living with HIV. Mexico gave him refugee status, based on a humanitarian cause. Credit: Sergio Ortiz/ Amnistía Internacional

MEXICO CITY, Dec 21 2017 (IPS) - As Daniel*, a 26-year-old architect, stood before a visibly exhausted doctor in the main public hospital of the once-idyllic beach resort town of Isla Margarita, northern Venezuela, a terrifying premonition took hold of him.

“We are not doing tests until further notice. The machine is not working and we don’t have any reagents,” the man in the white coat told him.

It was early June 2015. Venezuela was on the verge of a humanitarian crisis that was forcing people to queue for basic food and medical supplies. A couple of days before, Daniel had been diagnosed with HIV during a routine health check.

The tests being discussed were essential to establish the type of treatment he needed. But the main hospital in one of the richest states in Venezuela did not have the necessary supplies to carry them out. 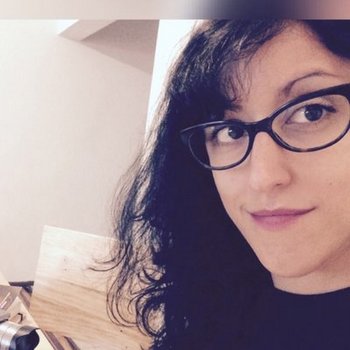 In much of the world, advances in treatment has meant HIV is now a chronic, manageable condition similar to diabetes, but in Venezuela it can now mean serious illness and risk of death.

Daniel’s premonition was brutally simple: no test. No treatment. No future.

The lack of everything

“Eventually doctors told me I was going to have to wait at least three months to have the tests done and start the treatment. I could not wait that long,” Daniel recalls.

In response to this crushing setback, he chose an option that most Venezuelans could not afford. He got hold of all the money he could, and went to a private health center.

But in Venezuela, where people can barely keep up with the ever-growing exchange rate and you need a couple of stacks of bills to buy a pizza, this was trickier than he thought.

Daniel needed one test every four months to ensure he was receiving the right treatment.

After the tests, his doctors prescribed an anti-retroviral – vital to keeping his immune system strong and preventing opportunistic illnesses from wreaking havoc on the body – and multivitamins to keep his immune system healthy. With a diagnosis and a prescription, Daniel went on a quest across the country.

He eventually got hold of 30 pills, enough to last a month, but finding over-the-counter multivitamins was nearly impossible.

By 2015, understocked pharmacies were used to seeing clients with prescriptions for one medicine and a long list of alternative medicines.

According to a report by a coalition of social and health organizations in Venezuela, in 2015 most public hospitals had an 80% shortage of medicines and a 70% shortage of medical supplies. Meanwhile, 60% of equipment simply did not work, and more than 50% of health professionals had fled the country.

The situation has deteriorated even further since then. By March 2016, there was an 85% shortage of basic medicines and medical supplies across the country.

In Venezuela, 90% of medicines and medical supplies are imported. These are paid for with foreign currency, which is administered and tightly controlled by the state.

In 2010, when the Venezuelan economy began spiraling out of control, the late President Hugo Chavez restricted the amount of foreign currency it allocated to the health and food sectors. Between 2014 and 2015, his successor Nicolas Maduro cut it by 65%. With none of these drugs being produced domestically, over time seven out of every 10 medicines simply disappeared.

The crisis was exacerbated when, due to Venezuela’s growing debts since 2010, most international drug suppliers stopped selling to the country.

The government stopped publishing any kind of health statistics, including causes of death, at least three years ago. The number of deaths caused by the collapse of the country’s health system is therefore impossible to know, but experts fear the number might be in the thousands.

When it comes to HIV, the picture is even more dire.

Feliciano Reyna, founder of Acción Solidaria, a local organization responding to HIV & AIDS in the country, says the health system is in a critical state.

“We are going through a humanitarian crisis. In 2014, the government accepted medicines from the Panamerican Health Organization but they were not enough and there are no signs that there will be medicines available next year. We estimate that approximately 77,000 people will not have medicines after February. We have gone back decades,” he said from his office in Caracas.

Feliciano’s organization receives donations of medicines from private individuals which he gives to the hundreds of desperate people that knock on his door every day.

“The damage this situation causes is incalculable. The uncertainty, the anxiety. People might receive their medicines today but they do not know what they will do next month.” 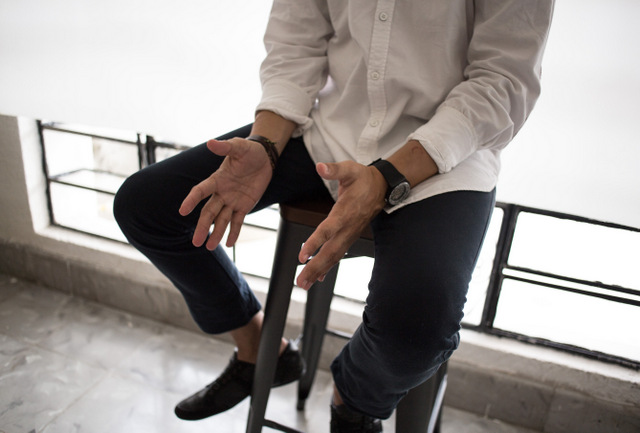 As months went by and prices for the tests he needed increased sharply, he began struggling to afford them. Working long hours at a studio in Isla Margarita, he didn’t have time to line up in seemingly endless queues in the few state-owned shops that sold food at “controlled prices”.

He grew more and more stressed and his health deteriorated. His weight dropped from 78kg to 64kg.

“Every time I went to have a test done, it would be 100 or 200% more expensive. I knew the time would come when I was not going to be able to pay the medical tests and consultations. That’s when I knew that the only option was to leave, at any cost,” he says.

When I meet Daniel in Mexico he is sitting behind a desk at his minimalist design studio in a small, bright house on the outskirts of Merida, southern Mexico. He shares the place with his partner, also from Venezuela.

Daniel is happy. He should be.

A few days earlier, he received a letter that would change his life.

It is a 21-page document from the Mexican Commission for Refugee Aid COMAR for its Spanish acronym), and it demonstrates a new trend in how the Mexican government decides who it will accept as a refugee, and who it won’t.

The document details the current state of affairs in Venezuela and argues that the lack of essential, life-saving medicines are part of the “massive human rights violations” in the country which merits Mexico granting asylum in this case.

Daniel’s story is one of a very small handful. He is one of the first Venezuelans to be taken by Mexico as a refugee on the basis of not being able to find life-saving medical treatment in his homeland.

Mexico has, in recent years, turned away more asylum seekers than it allows in. Most arrive from Central America, fleeing horrendous rates of violent crime.

Traditionally, in order to be considered a refugee in Mexico, an individual has to show that his or her life would be in danger at home, due to war or generalized violence. Being ill would not help anyone qualify as a refugee.

Experts believe this technicality could open the door for thousands of Venezuelan refugees.

Carolina Carreño from Sin Fronteras, the organization that helped secure Daniel’s asylum, does not go overboard in her praise of the Mexican authorities.

“We celebrate that the government has taken this case, but they are just doing what the law says. There are still many challenges when it comes to the way refugees are treated in this country. There are problems when it comes to identifying the people who are in great need of international protection, and the help they need once they are taken as refugees.”

Daniel’s desperation to leave the country is not unusual. The number of Venezuelans fleeing the country has rocketed in recent years.

According to the latest available data from the United Nations High Commission for Refugees, 100,000 Venezuelans applied for asylum across the world between January 2014 and October 2017 – the numbers doubling in the first half of 2017. Many Venezuelans feel the only way to escape the crisis is to leave home all together.

Mexico is among the top seven countries where Venezuelans are fleeing to, according to the UNHCR. The others are Brazil, Costa Rica, Panama, Peru, Spain and the USA.

However, the number of refugees is likely to be far higher as many flee to neighbouring countries – for example Colombia – and never apply for asylum.

According to figures from COMAR, just one Venezuelan applied for asylum in Mexico in 2013. In the first half of 2017, that number rose to 2676 – second only to the number of people applying for asylum from violence-ridden Honduras.

As the “Venezuelan exodus” has grown, countries in the Americas have tried to rise to the challenge and developed strategies to deal with the new influx of refugees.

Colombia, for example, created a special stay permit for Venezuelans who entered the country legally before July 2017 and had a stamped passport. This measure is supposed to benefit 210,000 people, however has only benefited about 65.000 people.

But Mexico’s decision to give refugee status to Daniel, based on a humanitarian cause, left even his lawyers surprised.

A long way from home

Yet the journey from Venezuela to Mexico was far from smooth.

When Daniel arrived in Cancun in March 2017, his dreams of safety were cut short when immigration authorities detained him at the airport and rejected his claim for asylum – despite the fact that he had a thick folder full of documents proving that he needed protection.

Daniel was put on a plane back to Maracaibo, Venezuela.

But he didn’t give up. He couldn’t afford to.

Daniel and his partner, who was already living in Mexico, consulted with lawyers from a Mexican organization helping refugees. They spent three months developing a water-tight case.

Meanwhile, the situation in Venezuela had deteriorated even further.

Daniel’s neighborhood had become increasingly dangerous, and he had to walk 16km to the travel agency to buy a plane ticket to Mexico as there was no other form of transport available, nor gas for the cars.

“I realized we were reaching rock bottom. I was wondering what I was going to do if I had to stay there, to get hold of my medicines. There were many shops that were not even open because they were scared of being robbed and because people had no way of getting there. It was a bit apocalyptic.”

Daniel knew this attempt at asylum would be his last. He was not going to be able to gather the money to travel again.

Arriving at Mexico City airport in May 2017, he handed over a letter requesting asylum. He was let in. The next day, he went to COMAR to make a formal request for asylum.

Following three months of relentless interviews, where he repeatedly had to recall his predicament in Venezuela, Daniel finally received the asylum letter he had so desperately fought for.

He is now where he wanted to be. With his partner, working in a studio in Merida, and with good chance of living healthily with HIV. He has a future, and he hopes others will not be denied theirs.

“I never thought I was going to need to apply for asylum in another country. But today, I feel very lucky. I just ask governments to help other people like me – we only need a chance.”