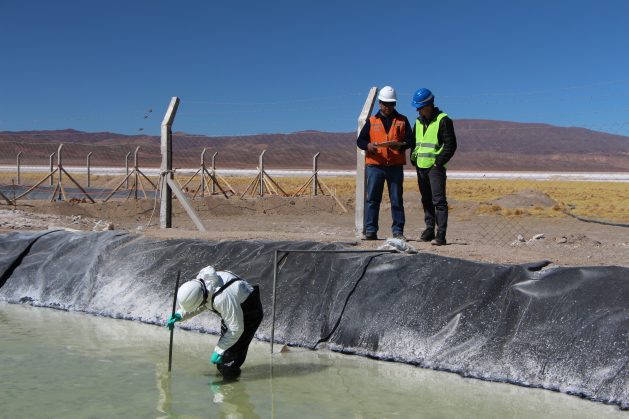 The effort to search for lithium in the Salar de Caucharí-Olaroz, in the province of Jujuy, is a project developed by the Exar mining company, a joint venture between Canadian Lithium Americas Corp (LAC) and the Chilean Sociedad Química y Minera (SQM). In total, there are 53 projects in the exploration or project feasibility phases. Credit: Mining Chamber of Commerce of the Province of Jujuy

BUENOS AIRES, Jan 11 2018 (IPS) - The government of Mauricio Macri dreams of Argentina becoming the world leader in lithium production. But it does not seem so clear that this aspiration, underpinned by the interest of multinational corporations, would also drive the development of local communities.

With just two projects in operation, Argentina today contributes some 40,000 tons per year of that key chemical element for batteries that are used around the world in, for example, cell phones and electric cars, representing 16 percent of global production, according to data from Argentina’s Energy and Mining Ministry (MinEM).

But these numbers are expected to increase significantly in the near future, because the main international companies engaged in this business – strongly linked to the energy transition from fossil fuels to clean sources – have already landed in Argentina.

Thus, in the last two years the sector has received nearly two billion dollars in foreign investment, and today there are no less than 53 projects in the phases of exploration or technical and economic feasibility studies, which cover a total area of 876,000 hectares in the northwest of the country, according to MinEM.

“In Argentina what we can do so far is extract lithium carbonate. The problem is that we do not have the technology or the patents for the assembly of the batteries,” economist Benito Carlos Aramayo told IPS.

“As a result, lithium will not change the production model of the northwest of the country, which is the production of raw materials. It will only expand it a little, because today we depend mainly on sugarcane and tobacco,” added Aramayo, assistant dean of the Faculty of Humanities at the National University of Jujuy. 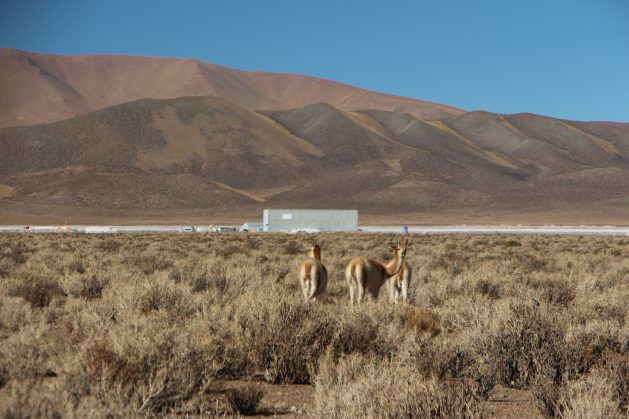 The llama is the animal best adapted to the arid conditions of the Argentinean region of the Puna de Atacama. The photo shows a group of llamas near a salt flat where exploration for lithium is being carried out. Credit: Mining Chamber of Commerce of the Province of Jujuy

Together with Salta and Catamarca, Jujuy is one of the northwestern provinces that account for most of the country’s lithium reserves. In fact, of the 53 projects that are expected to begin to operate soon, 48 are in these three provinces, in the Puna ecoregion.

The Puna is an arid zone, with salt flats that are over 4,000 meters above sea level, which is part of what has been called the “Lithium Triangle”, and includes northern Chile and southwestern Bolivia. In recent years, different scientific reports have pointed out that the region has approximately half of the world’s lithium reserves.

Chile has led the world market in recent years, but at present big investors in the sector seem to be looking towards Argentina, just as global demand for lithium is expected to rise threefold by 2025.

The intense exploratory activity carried out recently in the Argentine Puna increased the country’s lithium reserves, which in 2015 were estimated at 6.3 percent of the global total, compared to 13.8 percent today.

This growth was shown in a report jointly prepared by the U.S. Geological Survey (USGS) and Argentina’s Geological and Mining Service (SEGEMAR), which was made public in late November 2017.

“Argentina can become the world’s leading lithium exporter,” said Tom Schneberger, vice president of FMC Lithium, which through its subsidiary Minera del Altiplano produces some 22,500 tons of lithium a year in the Salar del Hombre Muerto, in the northwestern province of Catamarca.

In November, Schneberger announced investments for 300 million dollars with the objective of doubling the production in the salt flat by 2019, and gave two reasons to justify the company’s expectation: increased global demand and the “clear rules” set by the Macri administration.

The question is whether the exploitation of lithium reserves can bring benefits to the inhabitants of northwestern Argentina, a particularly impoverished area that has been increasingly in decline in recent years.

According to a paper by Aramayo, the province of Jujuy accounted for just 1.3 percent of Argentina’s GDP in 1980, and for only 0.6 percent this decade.

Historian Bruno Fornillo, who has researched what he calls “the geopolitics of lithium,” wrote that “the profits of the lithium energy industry – as in the case of the processing of all raw materials since the very start of capitalism – rise as you go up the value chain”.

Fornillo sees lithium as a possible tool for a new model of development and urges that local activity not be restricted to the extraction of the metal, but that it move towards the manufacturing of batteries, which requires a strong production of scientific knowledge.

This would, of course, involve the difficult task of breaking with the export and extractivist model.

“The extraction of lithium has things in common with other extractivisms, which are disguised as industries, but they are not, because they produce nothing, they only extract,” naturalist Claudio Bertonatti, an adviser to the Félix de Azara environmental foundation, told IPS.

“These industries have such economic power that they tend to overpower institutions in poor regions. And until a while ago they were associated with neoliberal governments, but lately we have realised that these companies have such power that the extractivism does not change, regardless of who is in the government,” he added.

The process of extracting lithium in the salt flats begins with the pumping of brine and continues with a long process of evaporation. Thus, using chemical substances, lithium is separated from other salts.

It is a similar method, although on an industrial scale, to the one used for generations to produce salt by the indigenous populations of the area, who have lived for thousands of years in the region where the lithium reserves are concentrated.

The indigenous property of many of the territories is also a source of conflict and, in fact, 33 communities from the provinces of Salta and Jujuy filed a claim in 2010 with Argentina’s Supreme Court, to try to assert their right to to be consulted, but was rejected by the highest court for formal reasons.

Later, in 2015, the same communities presented a consultation protocol that respects the principles and ancestral values of their peoples, the Kolla and Atacama, called Kachi Yupi (“Footprints of Salt”, in their native language). The document was delivered to the authorities to be used in any project that could affect them.