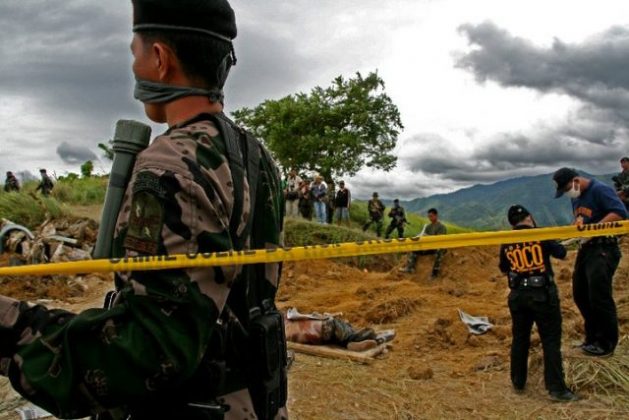 MANILA, Jan 10 2018 (IPS) - It’s not just suspected drug users and dealers at risk of targeted killing in the Philippines. The International Federation of Journalists (IFJ) reported last week that the Philippines is the most dangerous country in Southeast Asia for journalists. Globally, the island nation came sixth on the list of most murderous countries.

Joaquin Brinoes, Rudy Alicaway, Leodoro Diaz and Crisenciano Ibon Lozada. These are new names to be added to a tragic roster of killed journalists. In August, a gunman shot columnist Crisenciano Ibon in the back and seriously wounded his driver. The police speculate the attack may have been in retaliation for his columns criticizing illegal gambling. He had received many death threats.

Broadcaster Rudy Alicaway and columnist Leodoro Diaz were attacked within two days time. They were both riding motorcycles when gunmen came up behind and shot them dead. Their murders are likely linked to their reports on political corruption, underground gambling and the drug trade. Journalist Joaquin Briones was killed the same way. He was known for his hard-hitting radio program.

There is a fifth killing, not included in the statistics of IFJ. In August, Michael Marasigan, a respected former newspaper editor, was shot dead in a Manila suburb. Rodrigo Duterte’s administration says it is doing all it can to apprehend those responsible. But so far, no arrests have been made.

President Duterte is a vocal critic of the press. Even before he took office, as president-elect, he sent a chilling message to the press corps: “Just because you’re a journalist, you’re not exempted from assassination if you are a son of a bitch,” he said at a press conference. “Free speech won’t save you, my dear.”

The numbers of journalists being killed are dropping in recent years. But there is no room for complacency, says IFJ. Only a year ago, the Philippines was reported to be the second most dangerous country for journalists in the past 25 years. Only Iraq had more deaths. And in the Philippines, the IFJ warned, unprecedented numbers of journalists were jailed or forced to flee, self-censorship was widespread and impunity for the killings, harassment, attacks and threats against independent journalism was running at epidemic levels.

In September, Edito Mapayo, the editor-in-chief of Diaryo Balita, a local newspaper on the Mindanao island, was choked and punched by Surigao del Norte Vice Mayor Francisco Matugas Gonzales. And in August, a government official filed a libel case against ABS-CBN’s broadcast journalist Ted Failon and three members of his staff. They were looking into the “allegedly irregular purchase of secondhand motorcycles for Pope Francis’ visit to Manila in 2014”.

The country is in great need of independent journalists to report on human rights abuses, like the continuing war on drugs and the extended martial law in Mindanao. According to Human Rights Watch, the war on drugs has claimed 12,000 lives since president Rodrigo Duterte decided to purify his people from the evil of cheap drugs. Critics say he doesn’t let the law get in the way of his mission.

Last month, Congress approved Duterte’s request to extend martial law on the southern island of Mindanao until Dec. 31, 2018. UN special rapporteurs Victoria Tauli-Corpuz and Cecilia Jimenez-Damary released a statement on Jan. 3 saying  that the Lumads, the non-Muslim indigenous people living on Mindanao, are suffering from the island’s ongoing militarisation.

“Thousands of Lumads have already been forcibly displaced by the conflict and have seen their houses and livelihoods destroyed,” the experts said in their statement. There were also reports indicating that military forces had killed local farmers in early December.

The restive island of Mindanao is also the location of the single deadliest event for journalists in history. The Maguindanao massacre is named after the town where mass graves where found in November 2009. A convoy was on route to file a candidacy for local elections when it was attacked. Fifty-eight people were killed, including at least 34 journalists.

“We welcome the reduction for the third year in a row in the loss of life suffered by journalists and media staff during 2017,” says IFJ President Philippe Leruth. “While this represents a downward trend, the levels of violence in journalism remain unacceptably high. We find it most disturbing that governments refuse to tackle the impunity for these crimes targeting journalists. Instead, the patterns don’t change in the most violent countries.”

While Mexico and India are extremely dangerous places for journalists, no region was spared the scourge of violence, including Western democracies. Investigative journalist Daphne Caruana Galizia of Malta paid for her pursuit of the truth with her life. She was killed by a car bomb after she reported on government corruption, nepotism, patronage and allegations of money laundering.

“There is a safety crisis in journalism,” added IFJ General Secretary Anthony Bellanger. “There is a desperate need for a new instrument that finally would make it possible to implement a numerous of existing resolutions on media protection. We urge the adoption of this new convention to sustain other ongoing efforts to further promote the safety of journalists.”

In anticipation of such a guarantee for the safety of journalists, a few brave Philippinos are working hard to maintain an independent press.