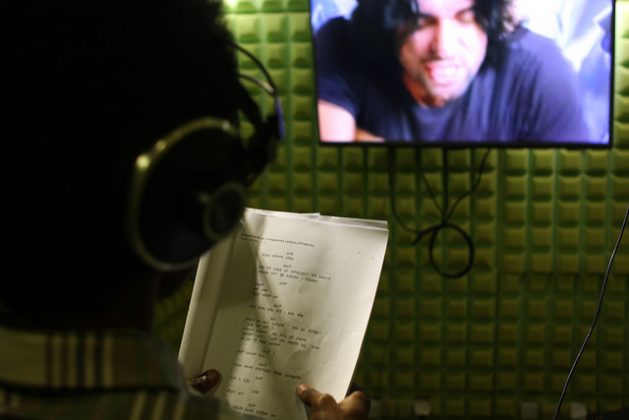 One of KANA TV’s dubbing team in a specially equipped sound-proof studio reading from his Amharic script to dub over a Turkish actor. Credit: James Jeffrey/IPS

ADDIS ABABA, Dec 21 2017 (IPS) - On a Saturday afternoon in one of Addis Ababa’s khat houses, a group of men and women chew the mildly narcotic plant while gazing mesmerized toward a television featuring a South Korean soldier stripped to his waist and holding a young lady’s hand while proclaiming his undying love—somewhat incongruously—in Amharic.

Broadcast exclusively in the lingua franca of Ethiopia—a necessity with 80 dialects across the country—and after decades of drab Ethiopian state-owned television, KANA TV marks a breakthrough in Ethiopian televised entertainment. It may also signal a shift in Ethiopia’s much criticised media environment.

The government appears to finally realise that squeezing private media is a mistake and self-defeating, leaving the field open to the likes of social-media activists with their own agendas.

“Kana” translates as something between taste and flavour, and Ethiopia’s estimated 4 million television households have found that this new private satellite TV channel carrying international standard programming very much to their taste. When it first aired, KANA seized a 40-50 percent share of the prime time market.

“It’s a crazy operation,” says co-founder Elias Schulze, the only non-Ethiopian amid the 180 staff. “At the beginning it took up to 50 man hours to dub one hour and we had to produce 200 man hours of content every day.”

So far KANA has dubbed 2,300 hours of foreign content, requiring a highly coordinated operation: research and analysis to select which shows to secure, then negotiations and purchase, followed by translation, casting, acting, syncing, audio editing, video editing, quality control and then scheduling. Finally, everything is uplinked to satellite.

“TV here used to be so boring, all the channels showed mainly news,” says an Addis Ababa resident and television viewer in her early twenties. “But KANA is pure entertainment, and people really like it.”

Ethiopia’s Amhara, the native speakers of Amharic, only constitute about a quarter of Ethiopia’s 100-million population. But before its launch, KANA conducted research that showed 70 percent of the country’s television viewers understood the language to a reasonable level.

That was an improvement on the 50 percent who couldn’t understand the Arabic-language satellite channels that had come to dominate Ethiopian viewing.

“People watched them because they enjoyed the quality and good storylines,” says Hailu Teklehaimanot, a producer and head of communications at KANA, and a former newspaper editor. “So we thought why not make that quality understandable through dubbing, while at the same time, our staff got on-the-job training we could eventually use for original productions.”

About 90 percent of KANA’s current output is dubbed foreign shows. The eventual goal is for half of output to be home-grown productions like KANA’s new Masters at Work series, which showcases the works of Ethiopian singers, poets, fashion designers, photographers and the like.

“There’s a narrative in mainstream media—both local and international—focusing on development or lack of development at the macro level,” Teklehaimanot says. “But there is a different narrative at the micro level in which inspired young people are doing new things.”

One example of this on Masters at Work is photographer Girma Berta, who specialises in taking photos on his mobile phone of simple images such as street kids and street vendors going about daily life.

“The message I want to send out to young people with interests in photography is not to be scared to try new things,” Berta says during his Masters at Work appearance. “Also, I would advise them to use social media properly to share their pictures, because they can show their pictures to the rest of the world easily; I think until we can find the style of photography that defines us, we must search for it ourselves.” 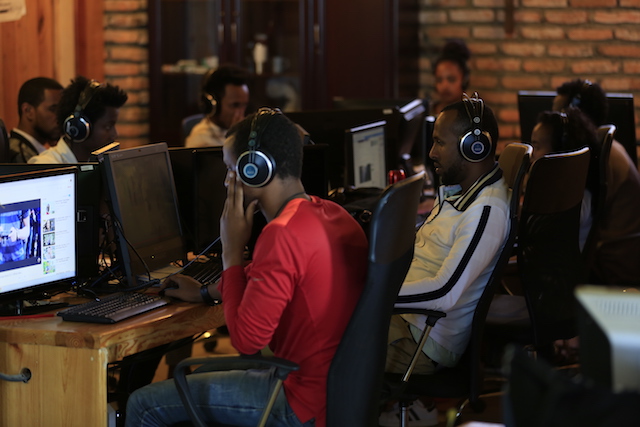 Despite such offerings of inspiration, the majority of KANA’s audience watch its shows like viewers anywhere—for entertainment or as escapism from the daily grind.

Others, meanwhile, would rather not watch it at all.

“I don’t let me family watch KANA TV otherwise we’ll never talk to each other when I return from work,” says one taxi driver in Addis Ababa.

“I believe [the Ethiopian Broadcasting Service] has been doing a far better job than KANA in representing Ethiopia’s indigenous and diaspora [populations],” Addis Ababa-based Mahder Sereke says on Twitter. “Also KANA’s soaps are debasing, not to Ethiopia’s culture but to Ethiopia’s women [through] their false—negatively—gendered depiction.”

EBS is a privately held media company based in the U.S. that targets the global Ethiopian market resulting from successive waves of emigration during decades of tumult in Ethiopia forming a significant Ethiopian diaspora of around two million people. The largest communities are in the U.S., with estimates varying from 250,000 people to about one million.

KANA has also been criticised for undercutting local production and poaching viewers from other TV outlets, thereby actually reducing opportunities for local artists and creative types to illustrate their works.

Meanwhile, some viewer fatigue has seen KANA losing some of its grip on the prime time market. But KANA’s emergence appears to indicate Ethiopian television could be finally changing for the better—albeit not as fast as many would wish.

In the past, Ethiopian government spokespersons haven’t been shy of explaining that media reform shouldn’t be rushed due to Ethiopia’s developmental state.

But now the government appears to finally realise that squeezing private media is a mistake and self-defeating, leaving the field open to the likes of social-media activists with their own agendas.

“The problem is a lot of things people view as gossip if heard by mouth, when they read about it on social media they take as fact,” Lidetu Ayele, founder of the opposition Ethiopia Democratic Party, says of social media’s influence during protests in Ethiopia.

And so, whether out of acknowledgment of the rights of Ethiopians not to be spoon fed state-sponsored propaganda or out of its own self-interest, the Ethiopian government is letting some winds of change finally blow through Ethiopian media.

“We don’t agree with the characterization that Ethiopia’s media landscape is repressed,” says Nazrawi Ghebreselasie, KANA’s managing director and co-founder. “It’s true that the industry in general is in its infancy; however, due to conducive policy environment, we are seeing massive investment going into media.”

Others, however, note that a new entertainment channel like KANA doesn’t connote Ethiopia’s media being unshackled—a fact emphasised by Ethiopian journalists and bloggers arrested for their journalism, often on the basis of terror charges, as highlighted by the international Committee to Protect Journalists.

“Media freedom depends on which yardstick you use,” says Daniel Berhane, a prominent Addis Ababa-based blogger. “The government appears to be relaxing about online and television media, but there are still no opposition newspapers.”

Ethiopia ranked 150th out of 180 countries in the 2017 press freedom index rankings by Reporters Without Borders. The international non-profit organization that promotes and defends freedom of information and the press states that the Ethiopian regime systematically uses the country’s anti-terror law against journalists.

Contrary voices, as a result, often have to come from the likes of ESAT, a popular Ethiopian satellite channel also broadcast from America. It is highly critical of the Ethiopian government and advertises itself as speaking for those who can’t speak in Ethiopia.

But part of KANA’s expanding original production base includes plans for a new news show, hence a whiteboard in the company’s offices covered in green marker pen hashing out its development.

Whether this news platform can be as insightful and demonstrate as much editorial freedom as news channels coming from outside Ethiopia will have to be seen.

But, at the same time, there appears reason for some optimism.

“The [negative] international view of media in Ethiopia is a bit exaggerated,” said Zekarias Sintayehu, editor in chief of Addis Ababa’s Reporter newspaper. “It is not a cakewalk to be journalist in Ethiopia but nobody can deny the prospects of a better media environment in the future.”