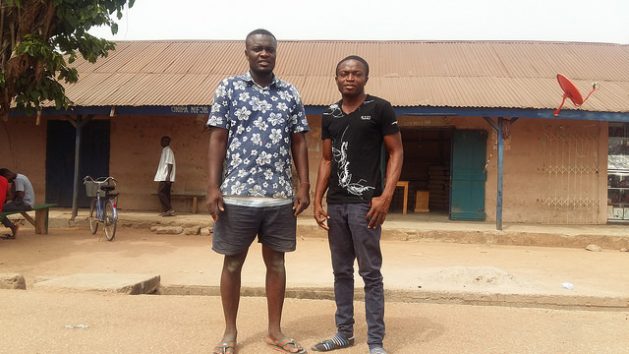 Nazir (left) and Usman both returned to Ghana from Libya in 2011, among some 19,000 Ghanaians who fled back home. Credit: Kwaku Botwe/IPS

KWAME DANSO, Ghana, Feb 6 2018 (IPS) - Thirty-year-old Nazir Mohammed sits on one of the two sofas in his single room in Kwame Danso, a small town about 290 kilometres north of Ghana’s capital Accra, reflecting on life back in Libya.

“Libya offers great economic opportunities to West African migrants, but the human rights abuse, especially of dark-skinned Africans, is real. I will not advise even my enemy to go to Libya,” Mohammed says.

He is among some 19,000 Ghanaians who were repatriated from Libya about seven years ago. Mohammed left home at 23 after completing high school. Having lost his father a few months before, he felt the responsibility of taking care of his mother and four other siblings naturally fell on him as an older male child.

“I just heard that if I get about 500 cedis (about 100 dollars) I would be able to get to Libya. And that meant a lot of hard work. So I did some construction work to gather that money,” he said. “My mom and family only got to know of my intentions when I called and told her. I was already halfway on my journey. She cried but later prayed for me since there was nothing she could do.”

Most young people set off on the trip without telling family members, anticipating they wouldn’t be supportive because of the risks.

Ghana, Senegal, Nigeria, Niger and Cote d’Ivoire all have a large number of their citizens among the almost one million migrants trapped in Libya. Mohammed’s home region, Brong Ahafo – which is in the middle belt of Ghana – has the highest number of people migrating to Libya. Most, like Mohammed, hope to use Libya as a transit point to Europe.

The history of Ghana–Libya migration dates back to the 1980s when the Ghanaian government signed a bilateral agreement with its Libyan counterpart to send some 200 Ghanaian teachers to teach English in Libya, according to researchers at the Centre for Migration Studies at the University of Ghana, Leander Kandilige and Geraldine Adiku.

This arrangement was also necessitated by the mass expulsion of illegal immigrants, mostly from West African countries, including about two million Ghanaians, from Nigeria in 1983. In the initial stages, the Libyan authorities offered employment to only highly skilled Ghanaian immigrants.

But the availability of job opportunities for other low-skilled migrants attracted many more Ghanaians who entered Libya through informal routes such as the Sahara Desert. As a result, the Libyan authorities clamped down on illegal migration amidst forced repatriations.

Before the 2011 Libyan political crisis, the Libyan authorities were already dealing with illegal immigrants and concomitant attacks, especially on black migrants. In 2006, the International Organisation for Migration (IOM) set up a voluntary return program to arrange for the return of stranded undocumented migrants from Libya to their countries of origin.

Statistics at the Ministry of Foreign Affairs and Regional Integration indicate that on Oct. 8, 2000, the first group of 238 Ghanaians fleeing attacks arrived in Ghana, with harrowing tales of gross human rights abuses. The influx has continued. Last year, 565 people returned with similar stories.

But the biggest evacuation of migrants happened in 2011 in the heat of the Libyan crisis, when IOM figures show that about 19,000 Ghanaians were evacuated back to Ghana. Many migrants attributed this exodus to increased hostility against black Africans. The political instability and challenge to the authority of Muammar Qaddafi offered a prime opportunity for some Libyan nationals – who see the Libyan leader as a shield for black Africans and have accused Qaddafi of using them as mercenaries – to attack dark-skinned people.

“It was very dangerous to be spotted as a black African,” said Mohammed. He said a lot of migrants left properties behind and several months of salary arrears from companies they worked for. Nazil says it is common practice for companies to pay migrant workers about two months’ salary after they have worked for six months. This means migrant workers always have their unpaid monies with the companies.

“I was lucky because I got help from a soldier friend whom I used to teach English to. He drove me and my friend all the way from Benghazi to neighboring Egypt where evacuation planes were. When I got to Ghana I had only 500 cedis left on me, but I had left about 7,000 cedis worth of money with my company, and that was very painful,” he added with bitterness. 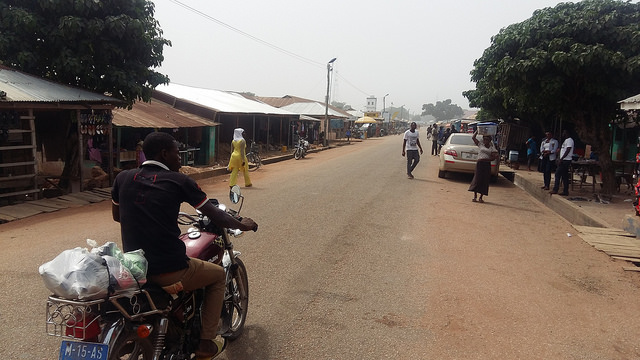 A lack of job opportunities for young people in Kwame Danso, Ghana has led many to attempt the risky migration to Libya. Credit: Kwaku Botwe/IPS

Most migrants from West Africa use the desert as an illegal route to enter Libya, and this leaves them vulnerable to human traffickers. Mohammed says thugs meet them at the border and take them to places which have now been dubbed slave camps. Once at the camps, migrants are held captive, fed just enough to keep them alive, and subjected to various forms of inhuman treatment in a bid to extort money.

Mohammed, who had hardly any money, was ordered to call his family and pressure them for a ransom.

Mohammed says his stepfather coughed up 300 cedis and he was released. But he added that some captives had to pay more, sometimes thousands.

Once out of the slave camp, the next difficulty is gathering enough money to pay to be smuggled to the Libyan capital, Tripoli. Making it to Tripoli is crucial for those who have hopes of reaching Europe because of the proximity the capital offers to Italy.

“I was engaged in very dangerous jobs such as lifting overly heavy concrete. I sneaked back to the ghetto [slave camp] and tipped some of the inmates for a place to sleep,” he recalled.

Mohammed says the journey to Tripoli was a nightmare as migrants were packed “like sardines in the back of a pick-up” covered with a tarpaulin tied down with a rope and driven on a hot, bumpy desert road for many kilometers.

“When we got to Tripoli I couldn’t stand, I couldn’t feel my legs and I thought I had sunstroke,” he said.

When he couldn’t find a decent job in Tripoli, Mohammed left for Benghazi, where he shuffled between jobs with hopes of gathering enough money to pay for the perilous trip on a packed-to-the-brim boat across the Mediterranean Sea. But his hopes of making it to Europe were dashed when the civil war broke out.

The story of migrants being sold at slave camps, first exposed by CNN, has been denied by Libyan authorities who accuse the media of wrongly portraying Libya as a racist country. Asked whether he believes in the slave trade story, Mohammed said he wouldn’t doubt it.

A year after their repatriation in 2011, IOM offered training and other forms of support, including equipment, for some returnees in three districts in the Brong Ahafo region, the region with the highest number of returnees, to help them integrate into their communities.

Anita Jawadurovna Wadud, Project Manager for the Returns, Protection and Direct Assistance to Vulnerable Migrants Unit of IOM, said the UN agency carries out various activities in Brong Ahafo, including awareness raising and sensitization of the risks of irregular migration in communities including in schools, a Migration Information Centre in Sunyani, livelihood projects for returnees and potential migrants, as well as reintegration activities for Ghanaian returnees who return to the region through IOM’s assisted voluntary return and reintegration (AVRR) programmes. IOM has been assisting Ghanaian returnees since 2002.

“Reintegration provides returnees with an opportunity to support their socio-economic reintegration, through counselling, psychosocial and medical support if needed, vocational/skills training and micro-business support,” she explained.

Mac Simpson, a Ghanaian teacher in Libya and expert on migration and human trafficking based in Tripoli, says out of the about 2,000 Ghanaian migrants who have died at sea in the past four years trying to make it to Europe, 1,600 are from the Brong Ahafo region.

Some advocates have used social media to share videos of maltreatment of migrants in Libya with the hope of discouraging hopefuls. But Simpson, who himself embarked on the deadly voyage more than two decades ago and has written three books about the migrant situation in Libya, says such videos have very little impact.

He says youth will continue to take the risk as long as they cannot find sustainable jobs in Ghana and Libya offers some hope.

“To convince someone from the Brong Ahafo Region not to go to Libya, you need to work some magic. My NGO went to the region to talk to some youth who had returned and when we asked what would make them stay, one said give me a taxi. So we got him one and as we talk he’s still in the country working as a taxi driver.”

Mac, who is currently in Ghana to engage in advocacy work, says he’s liaising with the Ministry of Education to adopt one of his books, The Cemetery Without Graves, among schoolchildren as he believes getting the message to people at a younger age can have some impact.

Finding something to do seem to be the factor that has kept Mohammed in Ghana. Even though his district wasn’t among those selected for intervention by IOM, he and other friends who returned to the Kwame Dano area have found their own ways back into society.

“I had good grades after Senior High School so I enrolled in a teacher training college. I’m now employed as a teacher in a junior high school… The pay isn’t too good but we are surviving,” he said, adding that since they came back, “some of us haven’t had any form of support from the government or anybody”.

Mohammed hopes to enter into politics where he believes he could influence policy and perhaps help to address this age-old Ghana-Libya migration canker. Until then, he believes a lot of uninformed youth will be making that treacherous journey in search of a better life.